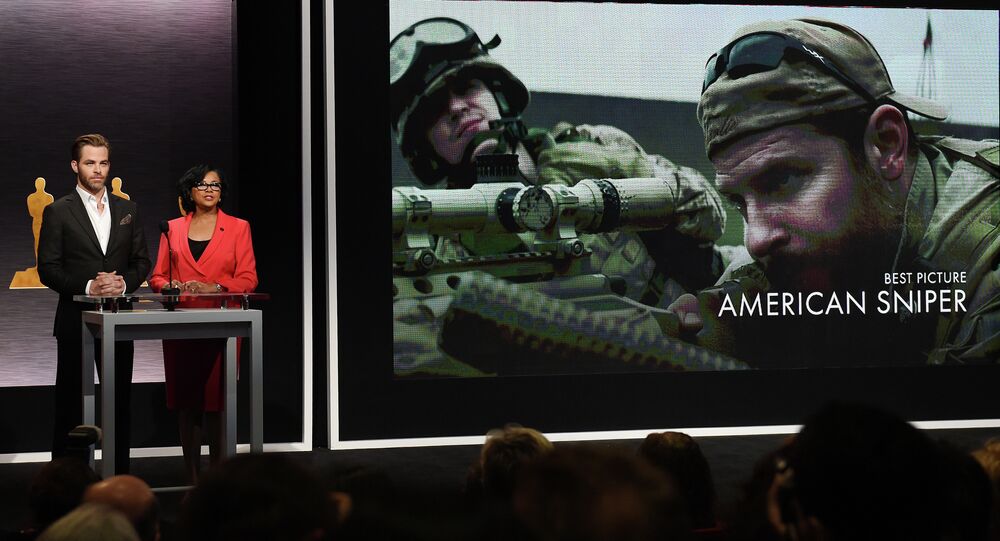 "American Sniper," Clint Eastwood's blockbuster has sparked fresh controversy over the US invasion of Iraq.

MOSCOW, January 24 (Sputnik), Ekaterina Blinova — "American Sniper," Clint Eastwood's long-anticipated blockbuster has sparked a heated debate, winning praise from American audiences while at the same time facing sharp criticism for its "black-and-white" narrative of the US intervention in Iraq.

"The movie gives America something it’s lacked since the start of the war – a war hero on a truly national, cultural scale," David French, a Senior Counsel at the American Center for Law and Justice, wrote in the National Review.

The blockbuster, directed by Clint Eastwood, based on former Navy Seal Chris Kyle's memoir, narrates the story of a US sniper fighting in Iraq. The movie has been nominated for six Oscars, including Best Picture and Best Actor nominations.

Former soldiers have welcomed the film positively and even organized special early screenings of "American Sniper" for US veterans. The blockbuster has also received high praise from the US public.

Saw #AmericanSniper.. What an amazing movie..I support Everything our troops do to protect us and themselves.. Thank you to our troops ��������

On the other hand, the film has also faced sharp criticism and has been criticized as a brazen attempt to whitewash the history of the US invasion of Iraq. Some critics claim that deadly sniper Chris Kyle cannot be honoured as a hero.

© REUTERS / Phil McCarten
#OscarsSoWhite: Oscar Nominations Spark Global Controversy
“My uncle was killed by sniper in WW2. We were taught snipers were cowards. Will shoot u in the back. Snipers aren’t heroes,” filmmaker Michael Moore wrote as cited by Agence France Presse.

"It [the film] presents a very sanitized picture of what the occupation of Iraq was like and the nature of the Iraqi resistance," noted Caputi, a US Marine, who fought in Iraq ten years ago.

"I stopped believing in good guys and bad guys because of my experience in Iraq," he added, as cited by the media outlet.

Saw #AmericanSniper. Man, somebody steal all the crayons out of Clint Eastwood's box except the black & white? Us Not Them Productions? Wow.

America would rather be political and culturally represented by #AmericanSniper than #Selma. as proven by box office & response to criticism

A reminder that if #AmericanSniper Chris Kyle and similar US war criminals hadn't destroyed Iraqi society, there would be no ISIS today.

Chris Kyle, on who’s book the movie was based, was indeed a controversial figure. Regarded as the most lethal sniper in US history, killing more than 160 Iraqis with his rifle, he wrote in his best-selling memoir: "I couldn’t give a f… about the Iraqis," "I hate the damn savages." The Guardian cites Kyle as saying that his work was "fun" that he "loved it," adding that the man obviously believed that everyone he shot was a "bad guy."

Chris Kyle was murdered in 2013 in Texas by a 25-year old US veteran, who reportedly suffered from post traumatic stress disorder.

Experts: ISIS Emerged Due to Irresponsible US Policy in Iraq, Libya and Syria
"Chris Kyle saw the world in clearly demarcated terms of good and evil, and American Sniper suggests that such dichromatism may have been key to both his success and survival; on the battlefield, doubt is akin to death," film critic Scott Foundas wrote in his article published in Variety.
"Kyle, much like many I served with, and our president himself during most of the Iraq War, held a very black-and-white view of the conflict. We were right, they were wrong," emphasized Paul Rieckhoff, the head of the Iraq Afghanistan Veterans of America, as quoted by Agence France Presse.
...
Reddit
Google+
Blogger
Pinterest
StumbleUpon
Telegram
WhatsApp
84