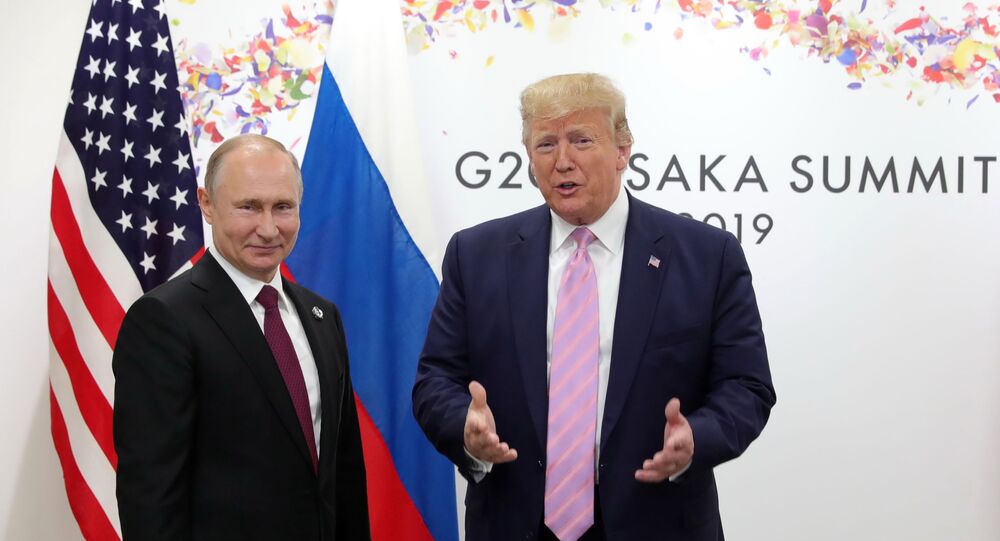 British Disinfo Machine Out of Whack: The Guardian's Trump-Russia ‘Bombshell’ Reeks of Forgery

The Guardian's latest Trump-Russia story has all the earmarks of a forgery, US military veteran and international affairs and security analyst Mark Sleboda says, offering his version as to who could have cooked it up and what the major goal of the "fake news" is.

The Guardian's latest "bombshell" story about how President Vladimir Putin ordered Russian spies at a closed session of the National Security Council to use "all possible force" to make Donald Trump win in 2016 has not got as much media attention as it was apparently planned.

The article written, by Luke Harding, Dan Sabbagh, and Julian Borger appeared on The Guardian's website on 15 July at 10:00 GMT. Another op-ed on the matter with a byline containing only Harding and Sabbagh was published on the same day at 17:05 GMT. The news was also advertised in the website's First Thing section on 15 and 16 July and yet, surprisingly, just a "few Western mainstream media outlets have written or reported on what they were all speculating and salivating about for all four years of the Trump presidency", notes Mark Sleboda, a US military veteran and international affairs and security analyst.

Still, there's an obvious explanation why the MSM has not taken the bait: the so-called "leak" smacks of an obvious bunk, according to the analyst, who outlines some obvious discrepancies in The Guardian's "exposé":

First, it's absolutely unclear how the supposed "leaked docs" ended up in The Guardian's hands: there is no chain of custody or explanation at all.

Second, despite The Guardian's claims that Western intelligence agencies have had these documents for months, no Western government or intelligence agency, neither the British nor the Americans, has so much as made a comment or peep about it.

Fourth, the Russian National Security Council is a formal political body which is not designed for discussing sensitive clandestine operations.

Fifth, the President's Expert Directorate headed by economist Vladimir Simonenko – named by The Guardian as the apparent author of the grand design to take over the US elections – in fact deals entirely with domestic matters, including the financing of the president and the presidential administration's activities, as well as collecting, analysing and preparing materials for the president's annual addresses.

Sixth, the alleged secret meeting took place in January 2016 when Donald Trump was not even considered as a serious presidential candidate, let alone the Republican nominee.

Seventh, the article is riddled with hedging words and expressions, papers "appear to show", "documents suggest", "assessed to be", etc., as if the authors knew that they were peddling disinformation.

Agree w/ @RidT on this Guardian reporting on Russian plans for the former President. This is far too convenient & reeks of #disinfo operation. It could all be individually or collectively true and at the same time planted & fake. So in the meantime, I’m taking this approach: https://t.co/0ZMSUfeJ9I pic.twitter.com/9vNSASnEB9

​The Guardian report "reeks of disinformation operation", former Director of Cybersecurity and Infrastructure Security Agency Chris Krebs remarked on 15 July. Krebs echoes another cybersecurity expert, Thomas Rid of John Hopkins University, who listed a series of issues with the "Kremlin leak" in a Twitter thread.

This whole thread. But, yeah, a lot very good reasons to think this is an elaborate forgery. More could come out that changes that, but it's imo a much better working assumption than it being real. https://t.co/PufVIRt6mr

​Even Dmitri Alperovitch, a co-founder and former CTO of Crowdstrike, who groundlessly blamed "Russian hackers" for breaching DNC servers back in 2016, has weighed in, dismissing the "leak" as forgery.

Compelling evidence that the document the Guardian published is a forgery https://t.co/Wq0KpKoU2k

​What's Behind the 'Kremlin Leak' Story?

On the surface, the "leak" appears to confirm practically every Russiagate fantasy and makes an oblique reference to unspecified "kompromat" on Trump – an apparent reference to ex-MI6 agent Christopher Steele's "dirty dossier" on the then presidential candidate and his campaign, Sleboda points out.

The analyst highlights that one of the authors of The Guardian's latest exposé – Luke Harding – has long been an ardent adept of the Steele dossier, despite the ex-British spook's bizarre claims having neither been corroborated nor confirmed by Special Counsel Robert Mueller's Trump-Russia investigation.

"There seems a likely possibility that these new 'Kremlin documents' like the previous Steele dossiers, were fabricated by British intelligence or elements within it, for the same purposes of discrediting Trump and preventing any, even faint, detente in US-Russian relations, whether under Trump or Biden", suggests Sleboda.

The UK has played a special role in the Trump-Russia story: "There has long been a widely held belief by many because of the prominence of the Steele dossier during the whole Russigate episode that there was a significant degree of the British tail wagging the US political dog", the analyst says.

Four years ago, Harding claimed that the UK intelligence service GCHQ became aware of "suspicious 'interactions' between figures connected to Trump and known or suspected Russian agents" as early as in 2015, well before their American counterparts. Citing unnamed sources in the UK intelligence community, the journalist presumed that British and EU spies collected information on Trump between late 2015 and summer 2016.

"It is understood that GCHQ was at no point carrying out a targeted operation against Trump or his team or proactively seeking information", Harding asserted on 13 April 2017. "The alleged conversations were picked up by chance as part of routine surveillance of Russian intelligence assets".

Furthermore, "[Harding] has previously claimed in The Guardian that British intelligence and Foreign Office was given the Steele dossier before it was sent to the United States and vouched for Steele's 'credibility' in reference to it", Sleboda remarks.

In 2021 alone, the British media has published a number of articles in support of Steele's debunked narrative:

·         in January, The Guardian ran an outlandish story of Trump being "cultivated" by the Soviet KGB for 40 years;

·         in May, The Telegraph broke a story about a "second dossier" written by Steele during Trump's presidency;

The fact that Steele's story is being kept alive in the British media would seem to indicate that the UK establishment is still backing Steele's anti-Trump/anti-Russia disinformation campaign, the security analyst believes.

If the "Kremlin documents" were indeed deliberately planted by the UK intelligence elements to target Trump's potential 2024 election bid as well as US-Russia relations under Biden, this is "an extremely important and dangerous situation", according to Sleboda.

"It would mean that the British government and/or intelligence have repeatedly conducted active measures to manipulate and interfere in both US domestic elections and foreign policy, destabilising the US political system domestically and putting the entire world at risk by deliberately increasing tensions between the world's two foremost nuclear armed powers", he says. "There will likely be no investigation or accountability into this latest Guardian piece of disinformation about Russia in the Western MSM but there most certainly should and desperately needs to be one".