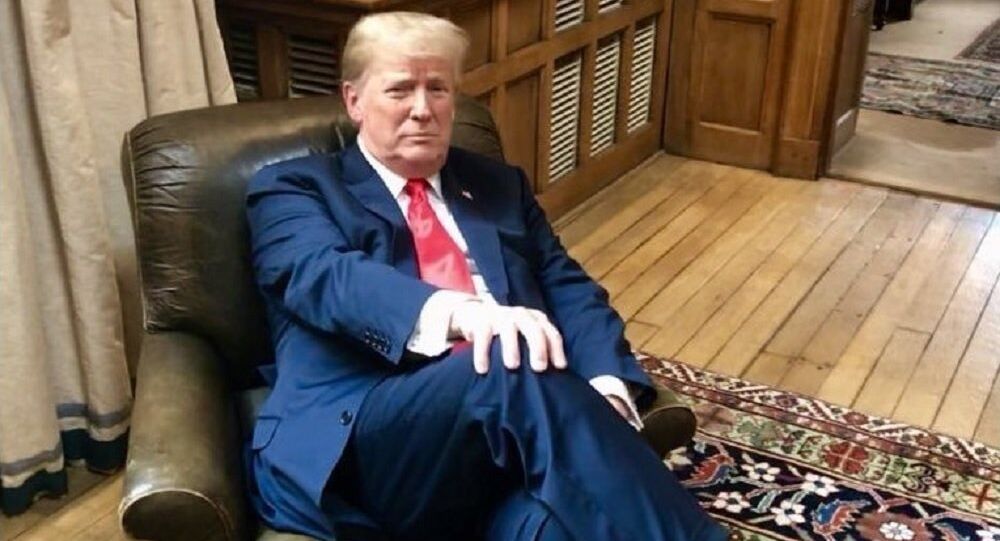 While both Republicans and Democrats agreed on Special Counsel Robert Mueller's conclusion that Russia did interfere in the US 2016 presidential elections – something that Moscow vehemently denies – Britain's role in the Trump-Russia probe remained beyond the scope. Speaking to Sputnik, observers discussed the UK’s involvement in the case.

On 24 April, US President Trump tweeted, citing ex-CIA analyst Larry Johnson, that British intelligence helped the Obama administration "spy" on his campaign: "It is now just a question of time before the truth comes out, and when it does, it will be a beauty!" he remarked.

“Former CIA analyst Larry Johnson accuses United Kingdom Intelligence of helping Obama Administration Spy on the 2016 Trump Presidential Campaign.” @OANN WOW! It is now just a question of time before the truth comes out, and when it does, it will be a beauty!

The much-discussed "dirty dossier" on Donald Trump was compiled by a former British MI6 agent and director of the London-based Orbis Business Intelligence firm, Christopher Steele, who was hired by Fusion GPS to conduct opposition research. The latter was employed by the Democratic National Committee (DNC) and the Clinton campaign in spring 2016.

Wall Street analyst and investigative journalist Charles Ortel raises the question as to why Steele, a British national, was picked as a "Russia specialist" by Fusion GPS.

"I do not believe Steele was (or is) a highly regarded analyst of Russia in recent years", the analyst said.

© AFP 2021 / MANDEL NGAN / FILES
Anti-Trump 'Coup': Spygate & Steele-FBI Cooperation Deserve Scrutiny – Analysts
Back in November 2017, The Guardian's Luke Harding admitted in his op-ed on Steele's dossier that "normally an intelligence officer would debrief sources directly, but since Steele could no longer visit Russia, this had to be done by others, or in third countries". That means the former spook could not double-check his sources directly.

Steele's methods also cast doubt on the quality of his memos. In his July 2018 deposition in the defamation lawsuit against BuzzFeed, the former MI6 agent admitted that while writing the dossier he relied upon a "random" not fact-checked article posted to CNN's old iReports website, among other sources.

On the other hand, being separately paid by the FBI for his Trump-Russia research, Steele leaked information about his investigation to Mother Jones and, according to Harding, had a series of "off-the-record meetings" with The New York Times, The Washington Post, Yahoo! News, The New Yorker, and CNN in September and October 2016, which prompted the bureau to disrupt cooperation.

"I do not believe the mission of Steele's ultimate employers was finding truth, but more likely obstructing the expressed will of the American electorate, should the 'unthinkable' happen and Donald Trump inhabit the White House as 45th President of the United States", Ortel stressed.

© REUTERS / Peter Nicholls
Doomed to be Handed Over to US, Assange Still Has Cards Up His Sleeve – Analysts
Commenting on foreign nationals' involvement in collecting intelligence on Donald Trump, the Wall Street analyst posed the question "whether [Steele's] Orbis was working solely for Perkins Coie, or whether it might have been working for foreign principals, say in the United Kingdom, who were concerned that President Trump would favour Brexit".

"Another key question is whether American government officials frightened of a Trump presidency may have been illegally serving interests of foreign principals in violation of 18 U.S.C. § 219", he noted.

© AP Photo / Victoria Jones/PA
Christopher Steele, former British intelligence officer in London Tuesday March 7, 2017 where he has spoken to the media for the first time . Steele who compiled an explosive and unproven dossier on President Donald Trump’s purported activities in Russia has returned to work

British Agents Were Active Behind the Scene of Trump-Russia Investigation

Fabien Chalandon, a French private investor, finance expert, and writer refers to the fact that "there is plenty of evidence that a number of 'former' or current MI6 agents were active behind the scenes to try to establish proofs of collusion between Mr Trump, his team on one side, and Russia on the other".

"By definition, [the] UK's still today theoretical involvement in the US 2016 presidential elections, if confirmed by hard evidence, could be construed as foreign interference, as the term interference does not differentiate between a foe and an ally. But all the facts are not yet on the table", he suggested.

© AP Photo / Jacquelyn Martin
‘I Was Set Up’: Papadopoulos Tells Sputnik He Was Target of US, UK Intelligence
While carrying out research on then US presidential candidate Trump, Steele had contact with Sir Richard Dearlove, who served as MI6 chief from 1999 to 2004. For his part, Dearlove was close to Cambridge Professor Stefan Halper, "the alleged FBI and CIA informant who established contact with several Trump campaign advisers", as The Daily Caller outlined in August 2018.

At the same time, the alleged "set-up" of Trump campaign aide George Papadopoulos occurred on British soil with Halper and Alexander Downer, a former Australian foreign minister (1996-2007) and high commissioner to the UK (2014-2018), approaching the campaign adviser in London in spring 2016. It was Papadopoulos' meeting with Downer in May 2016 that led to the opening of Operation Crossfire Hurricane on 31 July 2016.

Chalandon also referred to a meeting between Robert Peter Hannigan, then head of the GCHQ, and then CIA chief John Brennan in the summer of 2016 in Washington, calling it "strange", since usually Hannigan discussed job issues with his counterpart, then NSA Director Michael S. Rogers.

© REUTERS / Kevin Lamarque
FBI Spying on Trump Campaign Part of American Politics’ “Dirty Tricks” Ops
Furthermore, in January 2017, The Independent broke about the meeting between former British Ambassador to Russia Sir Andrew Wood and US Senator John McCain on Steele's findings, stressing that the diplomat had "played the key role" in passing "explosive allegations" about Trump to US intelligence agencies. Following the meeting, the dossier was handed to McCain and his close aide David Kramer, who leaked it to a dozen American mainstream media outlets, including BuzzFeed, as well as US officials.

According to Chalandon, the mounting controversy has led House Representative Devin Nunes to request an answer from US intelligence on how many spies were involved on the European side, and who exactly Maltese Professor Joseph Mifsud was, the man who reportedly told Papadopoulos that the Russians had thousands of Hillary Clinton emails but who denied this in an interview with the Italian newspaper Repubblica on 1 November 2017, instead insisting that he was a Clinton Foundation member.

During a Senate Judiciary Committee hearing on 1 May, Attorney General William Barr did not rule out that Christopher Steele's "dirty dossier" on Donald Trump was "part of the Russian disinformation campaign".

However, this version — vehemently rejected by Moscow from the start — fails to explain why the FBI had not verified Steele's findings before and after issuing a FISA warrant against Trump campaign aide Carter Page and why the inquiry was de facto "outsourced" to foreign nationals.

Steele's inability to directly double check his information did not prevent the FBI and DOJ from seeking a FISA probable cause order to spy on Page, which, according to former House Intelligence Committee Chairman Devin Nunes' memo, was wholly based on the "salacious and unverified" dossier. Likewise, Special Counsel Robert Mueller's report does not shed light on the sources behind Steele's "dirty dossier".

"Despite the central status of the Steele dossier to the collusion narrative, the Mueller report failed to analyse whether the dossier was filled with disinformation to mislead US intelligence agencies and the FBI", Senator Chuck Grassley noted on 1 May.

Philip Giraldi, a former CIA counter-terrorism specialist and military intelligence officer, noted that "it is normal to use outside sources and to pay them for their work but it does not mean that the work itself is not subject to review".

"[However] it is unusual to try to use it without subjecting it to judicial review and verification, which exposes the fact that this was a political hack job, not a normal inquiry or investigation", the CIA veteran opined.