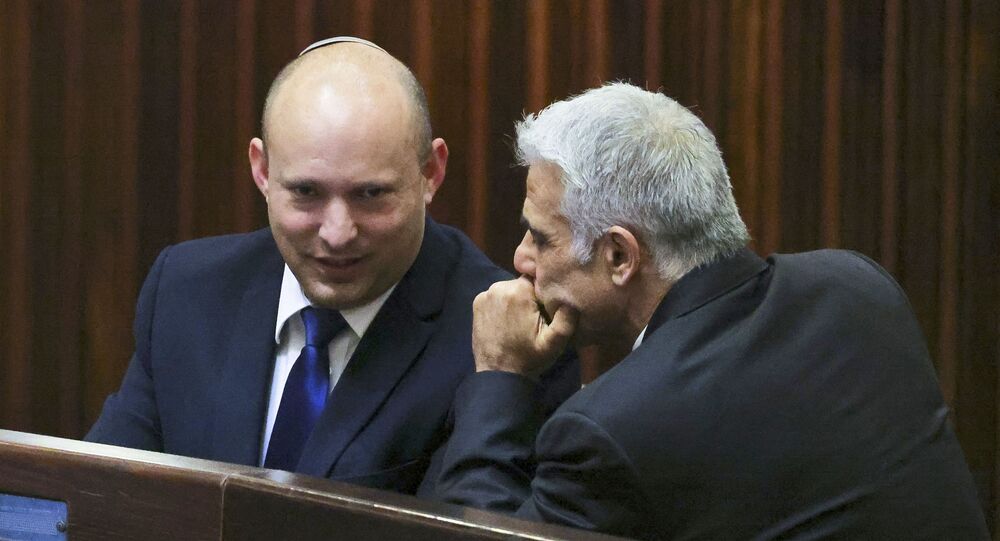 Naftali Bennett, the leader of the Yamina party, is to be Israel's next Prime Minister. Known for his hawkish views, including concerning Jerusalem and his country's settlements, he is unlikely to pursue peace with the Palestinians. And this is what makes some officials in the West Bank worry.

For the first time in 12 years, Israel might soon have a new prime minister. On Wednesday, just hours before his mandate was set to expire, the chairman of Yesh Atid party, Yair Lapid, informed the country's exiting President Reuven Rivlin that he managed to form a coalition that would force Benjamin Netanyahu to leave office.

According to the agreement, reached with the hawkish Yamina party, the person who will be leading Israel will be Naftali Bennett, known for his right-wing views. Lapid will be serving as foreign minister in the government until September 2023. Then he will take over the top job, letting his partner manage the Ministry of the Interior Affairs.

No Reason to Celebrate

For many in Israel, the new coalition was a reason to celebrate. But for the Palestinians it doesn't change much, and Dimitri Diliani, a member of Fatah's Revolutionary Guard, says Palestinians have few expectations from the incoming government.

"That coalition came about as a result of a struggle between two right-wing camps. It wasn't a struggle between pro- and anti-peace groups. So for us, replacing one racist government with another doesn't make that much of a difference. Although we might be happy to see Netanyahu go, we won't be welcoming Bennett."

That reluctance to accept Bennett is understandable. Yamina's political platform has always suggested that Jerusalem, disputed by Jews and Arabs, would belong to Israel only, with no option of splitting the city. It has always spoken against the release of Palestinian prisoners accused of terror activities.

It has vowed to continue the Jewish state's settlements in the West Bank, deemed as Jewish land by his hawkish base, and in 2020 it rejected the division plan of former US President Donald Trump that suggested to split the area between Israel and the Palestinians.

Taking the Prime Minister's office, Bennett is unlikely to make a U-turn on that policy, primarily because his hawkish base will not let him take that route. Neither is he expected to strive to end the Israeli-Palestinian conflict or work towards a two-state solution.

"Just like Netanyahu, Bennett represents everything that is anti-peace. This is why I doubt whether he will be working towards achieving that goal. And if he is pushed against the wall, he will pull out of that government and call for earlier elections".

Diliani is far from being the only person who thinks like that. Israeli media and political analysts have also warned that the coalition - which is only united in its desire to oust Netanyahu - is unlikely to last long.

Neither does it stand a chance when three parties of the seven-member bloc are hawkish, two are left-leaning and the other two are somewhere in the middle.

Although the liberal Yair Lapid and his Yesh Atid party might be able to bridge the gaps between the two opposing sides, chances that they will stay afloat are slim, says Diliani.

"I don't see how this government will be able to survive. Bennett will want to please his settler supporters. Mansour Abbas [the leader of Raam, an Islamic party that joined the coalition - ed.] will want to please the Palestinians. These two don't mix well - like oil and water. And that means that the government will fall and that [the liberal] Yair Lapid will not have a chance to become Israel's PM."

Yet, even if he does, Bennett's tenure promises to spell a number of challenges for the Palestinians, especially when it comes to Israel's settlements. And Diliani says the future promises quite a lot of turbulence and uncertainty.

"We worry that there will be an acceleration of Israel's illegal settlement activity. There will be more suffocation of the West Bank and perhaps another uncalculated and criminal adventure into Gaza. Bennett is bloodthirsty and racist and his base is even more radical than that of Netanyahu."