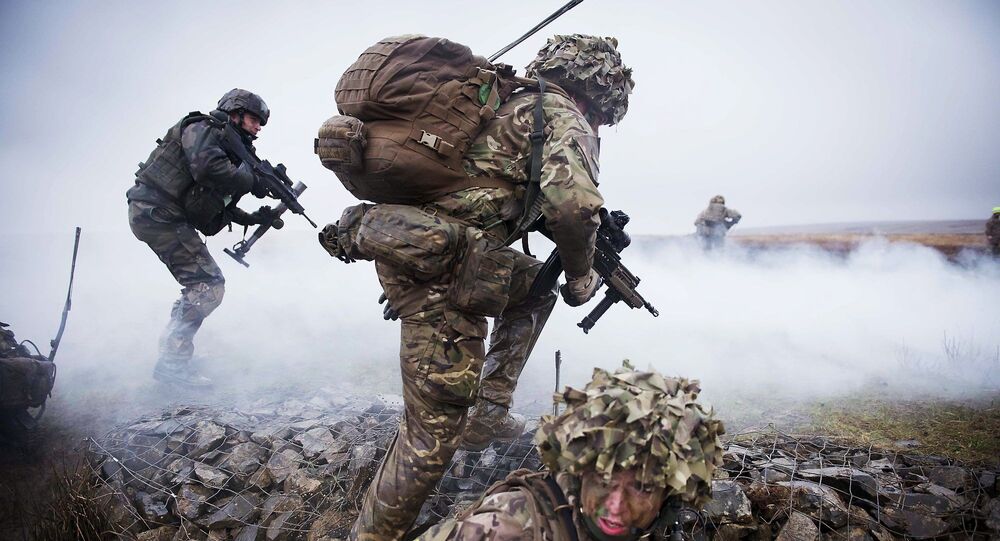 The UK Prime Minister unexpectedly announced the largest increase in military spending since the Cold War, on 19 November 2020. Sputnik spoke to a member of Britain's oldest secular anti-militarist organisation about their response to this surprise decision and why they think it has been made at this time.

Symon Hill of the Peace Pledge Union (PPU), a UK organisation that has been campaigning against militarism since 1934, responded to the recent announcement by the UK government to increase military spending by over £16.5 billion over the next four years. "[I]t's now clearer than ever that tanks and warplanes can't keep us safe from the most serious threats that we face such as pandemics, poverty and the climate emergency", Mr Hill told Sputnik.

Sputnik: What do you think has led to Boris Johnson making this surprise announcement regarding such a large increase in military spending?

Symon Hill: There are several explanations that could be offered, but none of them have much to do with protecting the people of the UK or making the world any safer.

Boris Johnson is facing strong criticism over his mishandling of the COVID pandemic, with problems including shortages of PPE equipment earlier in the year and the ongoing failures of the track-and-trace system. He's facing accusations of cronyism and even corruption, and even newspapers that usually support Johnson have attacked him over his resistance to proposals to extend free school meals in England.

Johnson's sudden announcement of large-scale military spending draws some attention away from these problems. It will help him curry favour with his party's traditional supporters and the pro-war press. At a time of change in US politics, it sends a message that the UK government will continue to be subservient to the USA: all recent US presidents have called for higher military spending by the UK, well aware that when the US takes military action, they can nearly always rely on UK governments to send British troops to join in, regardless of the wishes of the British people.

This decision also reflects the shocking influence of arms companies within the corridors of power. There is a constant revolving door between the government and the arms industry. For example, the former head of MI5 has just moved straight into a post as a director of the arms company Babcock. Former Foreign Secretary Robin Cook wrote that the chairman of BAE Systems had "the key to the garden door at Number Ten".

Sputnik: Do we know what exactly it is that they plan on spending this money on?

Symon Hill: So far, announcements have been pretty vague. There is talk of cyber-security and a promise of an "RAF space command" that will launch the first British military rockets from Scotland by 2022. It remains to be seen whether any of this will happen. Arms companies are famously unreliable when it comes to meeting orders from the UK government. They are frequently late and over-budget. For example, Babcock and Lockheed Martin managed to be a full six years late in delivering a new project to provide the core of UK military flight training. This isn't even unusual. Arms firms can be confident that their friends in the Ministry of "Defence" will continue to print off the contracts.

So I doubt that many people are holding their breath for British military rockets by 2022. If they do appear, they will only add to military tension and make no-one any safer.

Sputnik: Why has your organisation expressed concern over this announcement?

Symon Hill: We don't believe that security lies in weapons and preparation for war. The things that make people in Britain secure are largely the same things that can make people secure anywhere else in the world - decent housing, enough to eat, freedom from poverty and the fear of poverty, healthcare, education, welfare support when needed, freedom of expression and the love of friends, families and neighbours. If you are queueing at a food bank, worrying about losing your job or struggling to feed your children, is the knowledge that the government is building military rockets really likely to make you feel more secure?

Sputnik: Doesn't it make sense that the UK military will need an injection of cash if it really does face a multitude of threats and challenges all over the world?

Symon Hill: The UK already has the eighth highest military spending in the world and the second highest in NATO.

Most of the threats we face cannot be resisted with weapons. After a year in which our security has been threatened by a deadly virus, it's now clearer than ever that tanks and warplanes can't keep us safe from the most serious threats that we face, such as pandemics, poverty and the climate emergency. Militarism is itself a threat, not a response to a threat.

The militarist lobby in the UK talks up the threat of war with Russia. Meanwhile, Putin and his allies talk up the threats from the West. Russian governments and NATO governments use each other's militarism to justify their own. As the British section of War Resisters' International, the Peace Pledge Union stands with people around the world - in Russia, the USA and anywhere else - who resist militarism wherever it comes from.

Sputnik: What is it that your organisation is calling for?

Symon Hill: As a pacifist organisation, the PPU works with people around the world to build a world without war. Of course we don't expect this to happen overnight! However, those who dismiss it as an unrealistic aim should remember that the abolition of slavery, the call for equal rights for women and the end of apartheid have all at times been dismissed as unrealistic aims.

More immediately, we want to see a reversal of this decision on military spending. The money should be used to tackle the most serious threats to the security of people in Britain and the world, funding responses to climate change, to the COVID pandemic, and to the unemployment, homelessness, poverty and mental ill-health that are following on from the pandemic.

There is talk of using the army to vaccinate the British population once COVID vaccines have been approved for use. If only the political will were there, this could mark the first step in rededicating military resources to civilian use, employing such people in civilian emergency services instead of an authoritarian armed force, and using our resources to serve human needs instead of arms dealers' profits.