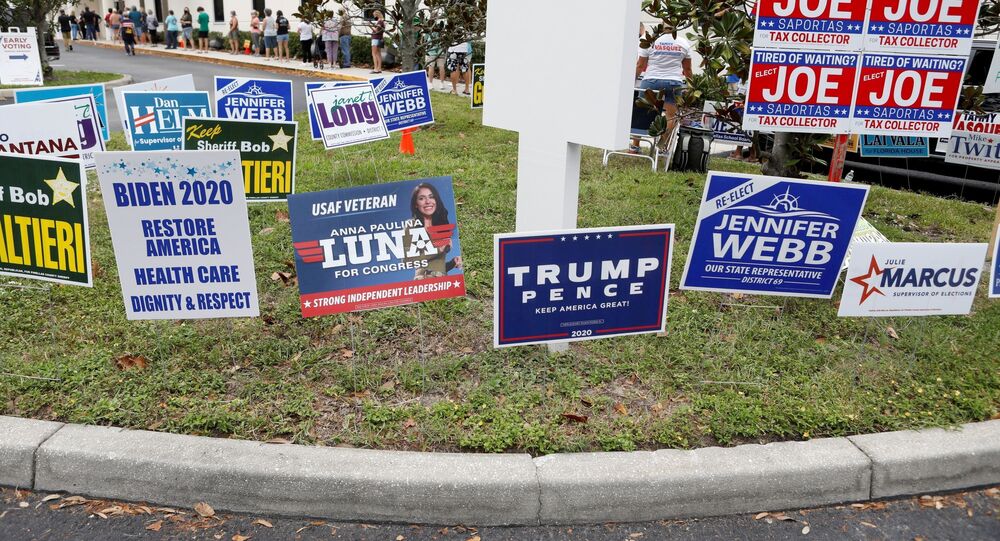 As the US presidential campaign entered its final day on Monday, the results of recent opinion polls provided by The Guardian tracker have showed that US President Donald Trump has overtaken his opponent Joe Biden in two swing states, while the latter is ahead in six.

William Stroock, a US political analyst and author, spoke in an interview with Sputnik about whether such polls can be trusted and what is to be expected from Donald Trump if he wins the upcoming election.

Sputnik: Opinion polls show that Biden's ratings and chances of winning are higher than Trump's, but we saw the same thing in 2016 with Clinton; nevertheless, Trump won the White House. In general, what are your personal beliefs and guesses about who will win the 2020 election?

William Stroock: Horserace polling in Western democracies from America to the UK to Israel is badly broken. That being said, there are polls that show a Trump victory. Establishment media dismisses these polls because the firms conducting [them] are right-leaning.

But these firms correctly called the 2016 election. If the polls showing Biden well ahead were right, he wouldn’t be campaigning in Pennsylvania right now. A recent Gallup poll showed 56% of Americans think they’re better off now than four years ago. An NBC poll said 50% of Americans think so. That’s your re-election number.

Trump and the GOP have a massive ground game with which to turn out voters. The GOP has chipped away at Democrat voter registration advantages in states like Pennsylvania and Florida. Trump has also made great inroads with African American and Hispanic voters.

And don’t forget about "shy" Trump voters. Some people just won’t tell strangers for whom they’ll vote. Trump voter enthusiasm has reached apocalyptic levels, with spontaneous rallies, car caravans and boat parades. Trump has a strong re-election message, while Biden’s only message is that he’s not Trump.

I think Trump will win all the states he won in 2016 and a few, probably Minnesota, Nevada and New Hampshire. He’ll win the popular vote outright.

Sputnik: President Donald Trump and his top aides are planning a huge overhaul of his Cabinet if he wins a second term, scuttling officials in key health-related and intelligence jobs who Trump views as disloyal, slow-acting, or naysayers. Is it typical in the US to change the Cabinet after a president wins a second term? Is there really such an urgent need for Trump to radically change key positions in the Cabinet?

William Stroock: It is not unusual for Cabinet officers to move in and out of an administration. Trump has had problems from the beginning getting people loyal to him rather than to the DC set. Overall now, Trump has people in the Cabinet who are loyal to him, though it seems likely that Secretary of Defence Mark Esper is out.

Trump should fire Robert Wrey, director of the FBI, and Gina Haspel, director of the CIA. They don’t work for him, they work for their agencies. Dr Fauci says whatever he thinks the press wants to hear, he should be gone too.

Sputnik: Of the 23 Cabinet-level posts in the Trump White House, only seven officials have lasted all four years. What are the main difficulties in your view of staying in the White House for a longer period?

William Stroock: There is no doubt that Trump is a difficult boss for whom to work, as shown by the high turnover rate. It seems Trump wants people answerable directly to him, who carry out his instructions to the letter without hesitation. This is not how Washington works. Which is one of the reasons Trump won in 2016, drain the swamp, he said.

Sputnik: During a recent rally, Donald Trump claimed that he “is proud to be the first president in decades who has started no new wars”. What can we expect from the Trump administration’s foreign policy agenda if he were to be re-elected? How will the policies change if Joe Biden occupies the White House?

William Stroock: I expect Trump will get the United States out of Afghanistan and push for a treaty with Kim Jong-un. There will be further pressure on Beijing. Expect more Middle East peace treaties. Otherwise, as British Prime Minister Harold Macmillan once said, "Events dear boy. Events". Biden would revive the Iran Deal, the Paris Climate Accord, the Trans-Pacific Partnership, and other globalist initiatives.

© REUTERS / Brandon Bell
Live Updates: Over 95 Mln Americans Cast Ballots in 2020 Presidential Vote by Monday, Tally Shows
Sputnik: How would you assess the narrative around Hunter Biden's laptop leaks? How much might this hurt his father's presidential campaign, as we’re seeing rather controversial evidence of misconduct from the leaked files?

William Stroock: Hunter Biden is a total disaster to himself and his to father’s campaign. The laptop revelations have hurt Joe Biden in a couple of ways. Biden’s best argument is that he’s a nice old guy and generally trustworthy, but now we know the Biden family does business with some very unsavoury people.

But more importantly, when the laptop is the story, it’s hard for Biden to get his own message out. Trump and his people played this story perfectly. There is no doubt he’s lost some voters.