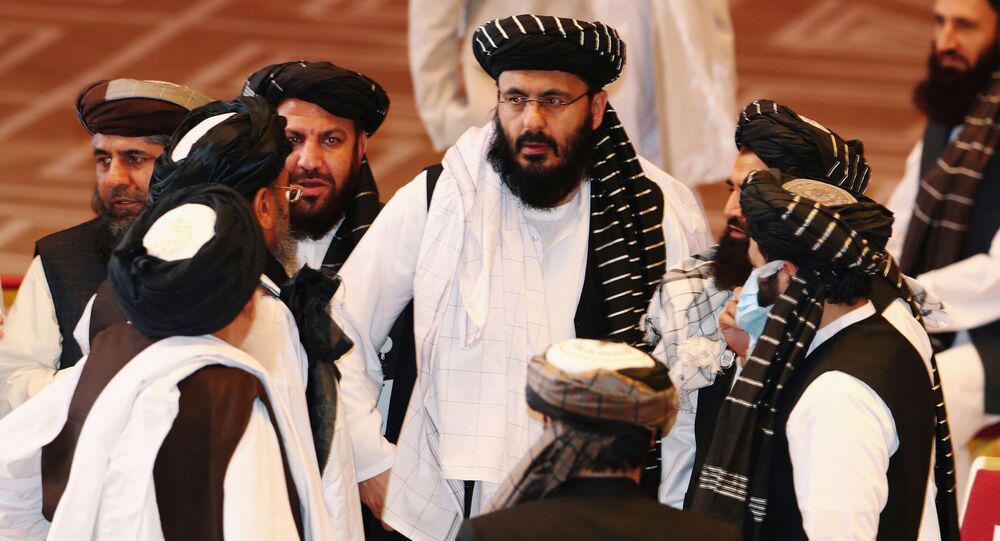 A war of words erupted over Taliban* spokesman Zabihullah Mujahid's phone interview with CBS News, in which he was cited as saying that they hope Donald Trump “will win the election and wind up the US military presence in Afghanistan". After Tim Murtaugh, the communications director for the Trump re-election campaign, rejected the Taliban's "support", the Afghan group's spokesperson tweeted that CBS News had interpreted and published his remarks "incorrectly". "Nothing of the sort has been communicated as publicized by them", he stressed.

Trump's Afghan Plan is a Positive Development in Taliban's Eyes

The controversial statements came amid the Afghan peace talks between the country's government and the Taliban, which started last month as part of the US-Taliban peace deal signed in February 2020 in Doha with the aim of ending the 19-year conflict. If the agreement's anti-terror conditions are met, the US military contingent will withdraw from the Central Asian country by May 2021.

Regardless of the apparent misinterpretation of Zabihullah Mujahid's remarks by CBS News, the truth is that the Taliban views Trump’s Afghan plan as a positive development which would eventually result in the closure of all military bases and withdrawal of all US troops and foreign forces from Afghanistan if intra-Afghan negotiations and the Taliban's efforts to fight terrorist groups such as Islamic State of Khorasan Province* (ISKP) becomes successful, says Sabtain Ahmed Dar, a Pakistani political analyst and author.

"Taliban diplomats see this peace plan as vital for future Afghan generations", the analyst says. "These agreements have been seen as significant and potent initial steps to intra-Afghan negotiations – and therefore to achieving peace and tranquility in Afghanistan – but still they do not ensure that intra-Afghan negotiations will turn out to be a win-win situation for all, because it depends on multiple variables in the context of balance of power system in South Asia."

It is also worth mentioning that it is the first time since 1996 that the United States has accepted the reality of the Taliban in Afghanistan, Dar says, arguing that though the Taliban has long been portrayed by the West as Islamist extremists and supporters of Al-Qaeda*, it has always been a local Afghani group different from international jihadists.

The Taliban, also known as the Islamic Emirate of Afghanistan, is an Islamic political movement and a military organisation that held power over most of the country between 1996 and 2001. Despite the US-led military invasion of 2001, the Taliban has continued to maintain control over a number of provinces and districts in the country over the decades, while refusing to recognise the Kabul government and establishing a separate set of laws and regulations for residents living within the territory it controls.

In order to understand the fundamentals and implications of the US-Taliban accords, it is important to specify what the Taliban and US have agreed upon, according to the analyst:

·         second, the United States agreed to withdraw all of its troops, allied forces and private military contractors in 14 months; the task of closing five military bases and reducing the number of US forces in Afghanistan to 8,600 troops has already been achieved;

·         third, the start of negotiations between Kabul government and Mullah Baradar, the head of the Taliban, would commence with the exchange and release of prisoners from both sides - this started in March, 2020;

·         fourth, the US welcomes the Taliban's prospective role in a new post-settlement Afghan Islamic government as determined by the intra-Afghan negotiations.

At the same time, there is no unity within the Afghani power circles with Dr. Abdullah Abdullah, the head of High Council for National Reconciliation (HCNR), having long been at odds with President Ashraf Ghani.

Following the 2019 Afghan presidential election, Abdullah and Ghani took the presidential oath of office at separate inauguration ceremonies on 9 March 2020. In May, the two politicians signed a power-sharing agreement which envisaged appointing Abdullah as the HCRN chief in charge of the intra-Afghan peace talks with the Taliban.

Ghani's political future appears vague if Trump's possible reelection can complete the remaining obligations of Afghan peace process, Dar believes, suggesting that the Taliban is likely to place their bet on Dr. Abdullah.

"The Taliban’s strategic calculation in the midst of Afghan Peace Process is clear that they have gained military advantage in their homeland since 2001 and to gain political expediency for power sharing and a new constitution, they must engage Dr. Abdullah Abdullah to form a hybrid government in Kabul that would be acceptable to Trump’s administration", the author observes.

Why Biden's Win May Usher in a New Era of Turmoil

However, if Trump loses his re-election bid, his bold peace plan for Afghanistan will be severely marginalised, warns Sabtain Ahmed Dar.

Left-leaning US media sources have repeatedly voiced skepticism over Trump's Afghan peace plan, with The Atlantic claiming that while George W. Bush and Barack Obama sought to annihilate or substantially degrade the Taliban, respectively, the US incumbent president has gone even so far as to ink a deal with the military group.

"Joe Biden is not only a Democrat, friends with war hawks in Washington but a potent representative of the US 'deep state' who has long been part of the US power structure since 1973", the political analyst says. "The Afghanistan crisis and the war bounty in the form of lithium, cobalt, opium, etc. is a great source of income for the US Military Industrial Complex."

While giving a phone interview to Stars and Stripes, the US military newspaper, in early September, Democratic presidential nominee Joe Biden said that he would keep a limited US military contingent in Afghanistan and Iraq to help combat terrorist groups. "These forever wars have to end ... but here's the problem, we still have to worry about terrorism", Biden said.

The US foreign policy establishment used Afghanistan as a foothold to maintain control over Central Asia, and besides this to "disintegrate nuclear Pakistan", the author points out, recalling that the US Operation Enduring Freedom (2001-2014) weaponised political Islam (Jihad bil Saif) against the very Islamic fabric of Pakistan to create anarchy both within the Pakistan Armed Forces and the civilian population.

"This is why pacifists in the United States, Afghanistan, the Taliban and Pakistan would tacitly support Donald Trump for his second term", the political analyst highlights. "Otherwise, the same history of endless turmoil would repeat itself inside Afghanistan if Joe Biden is somehow elected by the Americans in the November vote."

*Taliban, Islamic State of Khorasan Province (ISKP), and al-Qaeda are designated as terrorist groups in Russia.

Taliban Welcome Trump's Promise to Withdraw All US Troops by Christmas