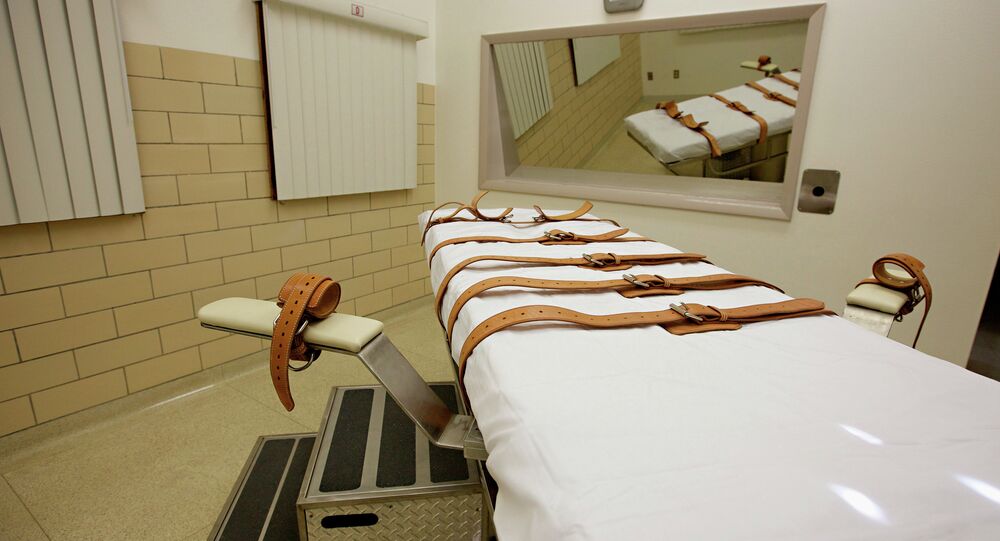 Lezmond Mitchell, the only Native American on US federal death row, was executed on August 26, becoming the fourth death row inmate to die of lethal injection this year and the “first person to be executed by the federal government for an intra-Indian crime,” his attorney said.

Mitchell, aged 38 and sentenced to death by lethal injection for the 2001 killing of a 63-year-old Navajo woman and her 9-year-old granddaughter, was executed on Wednesday and pronounced dead at 6:29 p.m. local time in Indiana - 26 minutes after the lethal injection was administered.

Mitchell had been convicted in taking part in the 2001 killing of a woman and her 9-year-old granddaughter. Leaders of the Navajo Nation had asked President Trump to intervene and commute his sentence to life in prison.

“Mr. Mitchell’s execution represents a gross insult to the sovereignty of the Navajo Nation, whose leaders had personally called on the President to commute his sentence to life without possibility of release,” Mitchell’s attorneys Jonathan Aminoff and Celeste Bacchi said in a statement.

“The very fact that he faced execution despite the tribe’s opposition to a death sentence for him reflected the government’s disdain for tribal sovereignty.”

Paul Wright, the founder and executive director of the Human Rights Defense Center and editor of Prison Legal News (PLN), explained to Radio Sputnik’s Loud and Clear hosts John Kiriakou and Brian Becker on Thursday that the decision confused many, because despite the fact that the crime took place on sovereign Native American land, it was handled as a federal case.

Daniel Lee, the father of the murdered girl, told the Associated Press that he supports the “eye for an eye” approach, rather than that of the Navajo Nation - which is anti-death penalty.

“He took my daughter away, and no remorse or anything like that. The Navajo Nation president, the council, they don’t speak for me. I speak for myself and for my daughter,” he added, as reported by Fox News.

According to court documents, the 9-year-old girl had her throat slit twice by Mitchell and co-defendant Johnny Orsinger, who were offered a ride by the victim’s 63-year-old Navajo grandmother.

The grandmother was ultimately stabbed by the duo a total of 33 times on the Navajo reservation, and the granddaughter was subsequently stoned to death after not immediately succumbing to the original throat wounds.

Despite the argument presented by Lee, Michael Slim, grandson of the older victim and cousin of the younger, appeared to have adopted a different view of the case, as he had written to Mitchell in the past year and keeps “thinking good thoughts about him.”

“We are all guilty of sin, so it’s not fair for us to condemn someone,” he said, according to the AP. “It’s not my job to say ‘we should kill him.’”

Mitchell’s execution came about after the US Supreme Court handed down a Tuesday decision denying the stay request of Mitchell’s defense team.

There was no dissent, but of Mitchell’s Request for a Stay of Execution, Justice Sotomayor noted that the Federal Death Penalty Act needs to be ‘clarified.’

Wright emphasized that at the time Mitchell committed the double murder, the administration of then-US President George W. Bush was coming under fire for its disproportionate death row sentencing.

“At the time, 90% of the men on death row were of Hispanic or African-American descent,” he pointed out.

He argued that then-Attorney General John Ashcroft then used Mitchell as a “pawn” in his campaign to place more non-Hispanic and non-Black individuals on death row.

A three-judge panel of the US Court of Appeals for the Ninth Circuit ruled in April that Mitchell did not have the right to interview jurors in his trial for evidence of racial bias. According to PBS’ Cronkite News, the court’s decision upheld a previous US District Court ruling which argued Mitchell had not presented the “extraordinary circumstances” that would allow jurors to be interviewed. Only one of the jurors was reported to be Native American.

“It is worth pausing to consider why Mitchell faces the prospect of being the first person to be executed by the federal government for an intra-Indian crime, committed in Indian Country, by virtue of a carjacking resulting in death,” wrote Judge Morgan Christen of the Ninth Circuit Court, reported the outlet.

She went on to express doubt within her opinion, stating there had been a “betrayal” of tribal sovereignty.

“This imposition of the death penalty in this case is a betrayal of a promise made to the Navajo Nation, and it demonstrates a deep disrepect for tribal sovereignty.”

Nevertheless, Mitchell’s execution went on as planned and marked the fourth federal execution of the year. The previous three were conducted, per the direction of US Attorney General Bill Barr, in Indiana in July - marking the first federal executions in the state in 17 years.