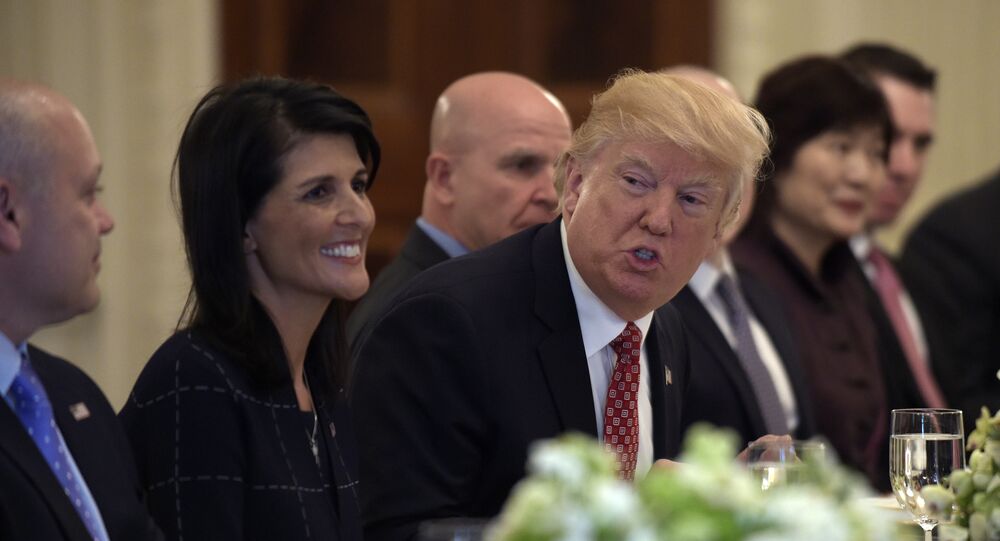 'New Shining Star': Will Nikki Haley Become GOP's Presidential Hopeful Either in 2024 or 2028?

In recent years, Nikki Haley has emerged as a national leader within the Republican Party, according to many in the media, who have noted the former Trump administration's official's spectacular political rise. International observers have discussed Haley's chances of becoming a GOP presidential hopeful during the next election cycles.

Ex-UN Ambassador Nikki Haley could make a good Republican presidential candidate either in 2024 or 2028 as well as a vice president in 2020, The Guardian alleged on Friday, citing the rumours floating around in Washington.

According to the media outlet, Haley combines a solid conservative record, foreign policy experience and strong appeal among US minorities due to her Indian Punjabi ancestry, which may one day bring her to the Oval Office.

Haley May Be a Favorite for Republican Nomination in 2024

"Extremely good at fundraising yet running her very own non-profit organization at the same time paired with Haley’s expertise in foreign affairs, observers agree that Haley could become a serious contender should she ever decide to be one in the first place", notes Klaus Jurgens, political analyst and journalist, outlining two possible scenarios for Haley's presidential bid:

·         First, if Donald Trump wins his second term, the Republicans would need "a fresh face" to hold on to the presidency after he departs the White House in 2024. Haley’s chances for a nomination are extremely good.

·         Second, if Trump loses, "frustrated Republican voters would be looking for a new shining star and Nikki Haley is a safe bet perhaps for 2024".

"Of Indian-American origin and duly elected as the first US governor anywhere with this background, Haley would basically present a conservative platform with a liberal angle, aiming at scoring big time in normally Democrat oriented voter circles, too, aiming at becoming a non-male, non-white US president", Jurgens emphasises, suggesting that amid the uncertainty created by the pandemic and anti-racism protests, Haley can become "the GOP’s trump card".

It is highly likely that Haley runs for the presidency in 2024, no matter the outcome of the 2020 contest, agrees Dr Rubrick Biegon, a lecturer in international relations at the University of Kent.

"She would be a relatively formidable candidate on paper", the academic presumes. "Haley would seem to have appeal with some segments of the electorate that have moved away from the Republican Party in recent elections, namely suburban women."

On the one hand, her record over the years was fairly conservative, so "that may endear her to the GOP base". On the other hand, the fact that she's a woman of "colour" might make it easier for her to attract votes of the more independent-leaning electorate, according to Biegon.

There will be a crowded field of Republican contenders in 2024, including Scott Walker, John Kasich, Ted Cruz, Tom Cotton and others, foresees Robert Spitzer, an American political scientist and author. However, even under these circumstances, Nikki Haley is "very well positioned to become a party leader and vie for the nomination for president", he observes.

The author remarks that the former UN ambassador is not so closely tied to Trump to be dragged down with him in the case of his defeat, which can also be seen as her advantage.

However, having named Haley "a fascinating candidate for the Republican Party", Laura Wilson, a political science professor at the University of Indianapolis, expresses concerns with regard to the ex-UN ambassador's chances of winning a race for the White House.

"As an Indian-American woman, she represents more diversity than traditional Republican candidates", Wilson presumes. "President Trump’s own base is loyal specifically to him as a candidate and politician; they represent a small but thus far solid part of the Republican Party and it is difficult to foresee another victory for Republicans without that support."

The observers' views on whether Haley could become Trump's new running mate in 2020 differ as well.

According to Klaus Jurgens, a window of opportunity may open for the ex-UN ambassador if "Trump starts to worry about his re-election chances": in order to give a boost to his campaign, the president may replace his current candidate for vice president "with no one other than yes you guessed it, former South Carolina Governor Nikki Haley", the political analyst hypothesizes.

Still, Wilson argues that while it is always possible, changing out vice presidents at this point would be politically risky and hard to explain.

"Vice President Pence has enjoyed generally good approval numbers, particularly relative to President Trump", she stresses. "He originally carried the religiously conservative and Midwest voters for the ticket and replacing him with someone like Haley would be hard to explain for the large swath of voters who supported the ticket because of Pence."

The political science professor does not rule out that "the greatest advantage of a switch like this is invigorating the ticket, particularly important if Joe Biden selects a woman as his vice presidential running partner as a way to attract female voters". In the event of this, Haley would be able to "undercut Trump’s challenge with women voters and voters of color, aiming to bring that support to the Republican ticket", Wilson explains.

"Beyond identity politics, she has both state and national government experience, but so does Pence and he has already served a term in the office and thus has an advantage against Haley in having that specific experience", the political scientist concludes.

This is not the first time that Haley has been mentioned as a potential candidate for the vice presidency: in 2012, then-Republican presidential hopeful Mitt Romney allegedly considered her as a running mate; in January 2016, The Economist listed her among possible vice-presidential contenders.

Nikki Haley Was Under Consideration to ‘Step in as Vice President’ Ahead of 2020 Race, Book Claims