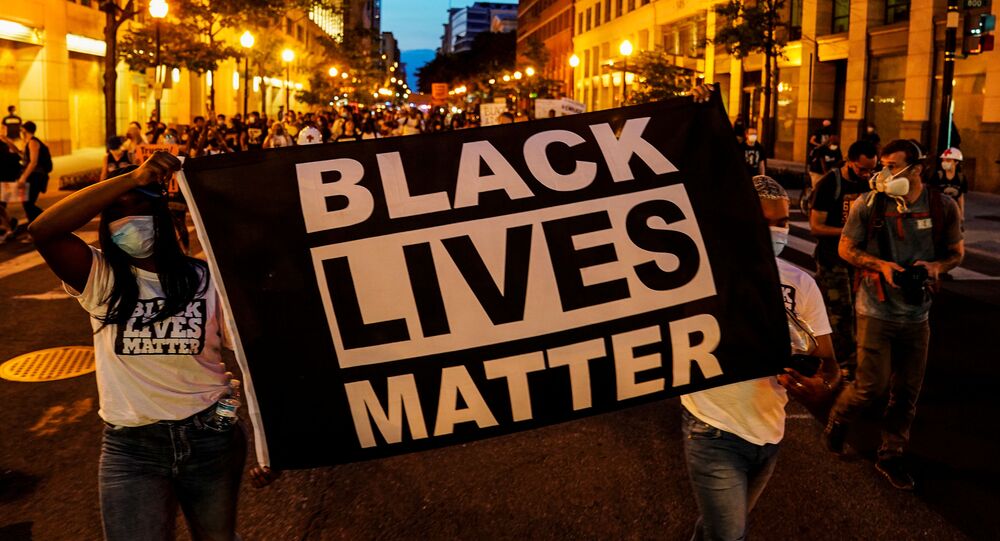 On Tuesday, the Contra Costa County District Attorney's Office announced that two individuals would be charged with three misdemeanor counts, including a hate crime, after painting over the Black Lives Matter mural in Democratic-run Martinez, California.

The incident came on the heels of a nation-wide vandalism spree amid the Black Lives Matter protests, which saw dozens of statues taken down by rioters under the pretext that the monuments were "honouring racist figures"; In many cases the vandals went unpunished. One might wonder what's behind the double-standard approach.

BLM Activates Specifically Ahead of Elections

There are many examples of Democratic local authorities expressing a "special" attitude towards Black Live Matter protesters who were, in particular, allowed to take over the Capitol Hill neighbourhood of Seattle and establish a similar "City Hall Autonomous Zone" in New York City.

​"[The protesters] enjoy protection by the state representatives and city councils they helped get elected," opines Robert Bishop, a retired Certified Public Accountant (CPA) and business executive. "The individuals charged with the hate crime could have made a better political statement by simply 'blackening out' the V in Black Lives Matter".

There’s no need to caption this. Just listen. pic.twitter.com/g1b5MNnmW0

​According to Bishop, there is a peculiar pattern of "identity politics" used by the Dems and their liberal sponsors before the elections. To illustrate his point, he offered to take a look at Google Trends.

The previous sharp spike in interest in the Black Lives Matter movement was registered in July 2016; in 2020 a new cycle of rising interest reached its peak in June, just months before the presidential elections.

The Black Lives Matter movement's origins go back to the fatal shooting of Trayvon Martin by George Zimmerman in 2012. However, it had attracted little media attention until the Ferguson protests of 2014-2015, when large liberal donors and celebrities started to fork out to boost the movement.

Ken Zimmerman, the director of US programmes at Open Society Foundations, told The Daily Beast in April 2017 that Riddell's conclusions were not true: according to Zimmerman, there was "no way to directly fund an amorphous movement like Black Lives Matter, even if George Soros wanted to".

Who are Milking BLM and Why Do They Remain in the Shadows?

Though OSF's director alleged that funding BLM was somewhat impossible, Politico revealed in November 2015 that "the biggest donors on the left" considered sponsoring the movement and arranged a meeting with BLM leaders at the annual summit of the Democracy Alliance (DA) of which George Soros is a prominent member.

However, in some sense, Zimmerman's notion of the movement's amorphousness is spot on, given its haphazard structure and non-transparent funding schemes, touched upon by Robert Bishop in his previous interview.

The Black Lives Matter Global Network Foundation, Inc., which runs the Black Lives Matter website, is currently regarded as the front organisation of the movement. However, there are others, such as the “Black Lives Matter Foundation,” based in Santa Clarita. Though the two entities earlier announced that they were not affiliated, the American investigative think tank Capital Research Center has found that both entities received grants from Thousand Currents, their fiscal sponsor.

According to the think tank, entities funding Black Lives Matter (along with, presumably, the BLM Global Network Foundation) through Thousand Currents include, in particular, the NoVo Foundation, the W.K. Kellogg Foundation, and Borealis Philanthropy. The latter is especially interesting being an "intermediary" financially supported by such behemoths as the Ford Foundation, Soros' Open Society Foundation, and the Bush Foundation, to name just a few, according to Influence Watch.

"Many of the private foundations were founded decades ago and the wealthy families that controlled them have gradually lost control over the passing of each generation," Bishop explains. "The foundations are now under the control of progressives who are promoting the myth of egalitarianism."

Generous liberal donors are also funnelling money into the Movement for Black Lives (M4BL), formed in 2014 as "a space for Black organisations across the country" and described as "a national network of over 50 organisations engaged in the Black Lives Matter movement". In July 2016, the Ford Foundation, the second-largest philanthropic entity in the US, announced that it had made $40 million six-year investments in the organisations and networks that comprise the Movement for Black Lives through the Black-Led Movement Fund (BLMF) specifically created for that purpose, together with Borealis Philanthropy.

Currently, BLMF is specifically sponsored by the General Service Foundation, the Moriah Fund, the Nathan Cummings Foundation, and Soros' Open Society Foundations among others. The Black-Led Movement Fund (BLMF) is sending grants to many black-led entities, including chapters apparently affiliated with the Black Lives Matter Global Network Foundation. As for M4BL, it is also collecting grants through its fiscal sponsor, the Alliance for Global Justice.

It appears that despite Zimmermann's concerns, both the OSF and other big liberal donors eventually found a way to fund the "amorphous" Black Lives Matter movement. Still, the funding scheme of the Black Lives Matter-associated organisations remains murky and complicated, according to Bishop. Besides this, its no coincidence that most of the entities are using "fiscal sponsorships", designed for temporary or episodic fundraising.

© REUTERS / Leah Millis
A group of protesters burn American flags and leaflets with the flag, even as other protesters disagreed with the act, during a protest against racial inequality and police violence near Black Lives Matter Plaza, during Fourth of July holiday, in Washington, DC. 4 July 2020.

He highlights that "American charities that operate internationally such as Soros' OSF are not yet regulated properly, perhaps by design".

Ortel notes that as for 2014 activities by BLM, there's no evidence in the public domain that any of the entities was or is validly organised as a charity or pursued genuine politically unbiased charitable purposes. "If I am correct, OSF (and other donors) should face penalties for making prohibited 'taxable expenditures' to entities purporting to be Black Lives Matter," he says.

According to Ortel, "soliciting funds to foment violent revolution is certainly not valid fiscal sponsorship or lawful tax exempt activity", let alone the fact that the co-director of Thousand Currents is a former convict who was sentenced to 58 years in prison on weapons and explosives charges.

"Primary oversight of these falls to state-level officials who are elected," the analyst elaborates. "These officials themselves need money for their campaigns so perhaps they tread lightly when offences are alleged against charities run by large donors to political parties and candidates, such as George Soros."

What is unfolding now appears to be an unholy alliance of Democratic politicians, liberal donors and Black Lives Matter protesters mobilising public opinion against Trump and his America First agenda ahead of the elections, according to the observers.

"Politicians and parties have insatiable appetites for money, which they claim they spend on causes and candidates," Ortel says. "But the truth is no one checks carefully enough to ensure all money collected is declared and from legitimate donors, or that declared contributions are actually spent in lawful ways. Meanwhile, elected officials can enrich donors (and themselves and their families) or they can persecute rivals or enemies."

So, there is an active market trading for political influence and it is especially easy by using large and poorly controlled "charities" run by dynastic political families, according to him.

Meanwhile, Black Lives Matter appears to be a perfect ally to the Dems, not only in their attempts to unseat Trump but also in the "radical restructuring of the United States": "the Democratic Party leadership likely saw and sees much in common with the leaders of 'BLM', many of whom are aspiring to tear down the present system to forge a new, as yet unspecified replacement," Ortel concludes.