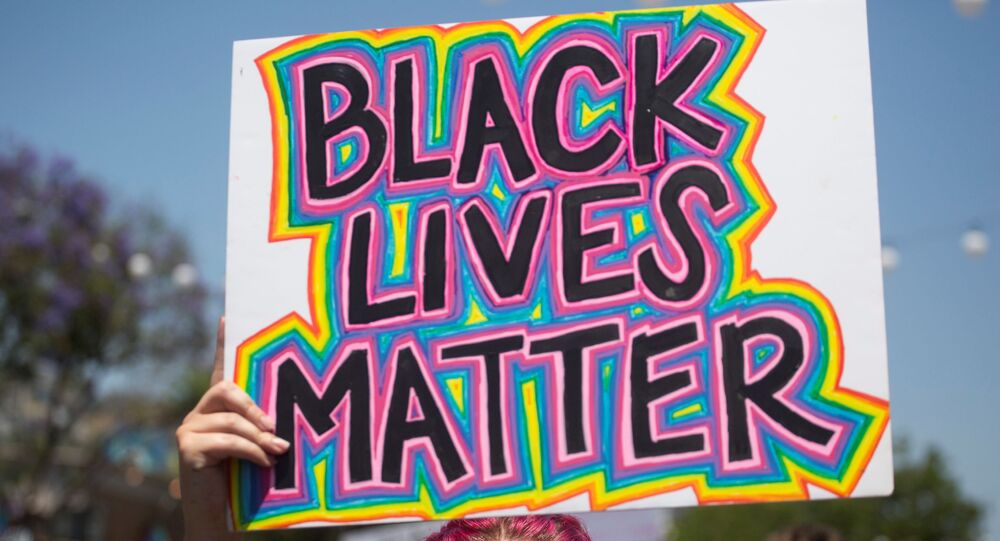 Though the Black Lives Matter Global Network positions itself as a charity, its funding and spending are not transparent, while its activities appear partisan and less than peaceful, say Wall Street analyst Charles Ortel and Robert Bishop, retired corporate CPA, suspecting the entity may be involved in potential fraud and money laundering schemes.

Worldwide protests against police brutality have opened the door to a fundraising bonanza for the Black Lives Matter (BLM) movement which has obtained millions of dollars amid the George Floyd protests. At the same time, however, people have started to wonder where exactly the money is going.

To add to the controversy, media speculations emerged in mid-June that over $4 million raised by employees of Apple, Google, and Microsoft had allegedly gone to a "wrong" BLM organisation.

BLM Global Network Has Never Been Registered With IRS

The confusion was predictable given that about 13 "BLM" entities can be found on the Internal Revenue Service (IRS) website with most of them not correctly organised and operated, say Wall Street analyst Charles Ortel and Robert Bishop, a retired Certified Public Accountant (CPA) and business executive.

This circumstance prompted Candace Owens, a conservative African American activist, to allege that the Black Lives Matter Global Network is not a charity but "a full-fledged corporation that does not have any locations". However, PolitiFact.com, a project operated by the Poynter Institute, argued in response that the entity is incorporated and "operates as a charity" having a fiscal sponsorship with the Thousand Currents.

According to its website Black Lives Matter, Inc is NOT a charity. It is a full-fledged corporation that does NOT have any locations. Can anyone tell me then where the hundreds of millions BLM has raised goes? Can anyone tell me in what state BLM was incorporated & by who?

​Indeed, on 6 September 2016, the BLM founders concluded a fiscal sponsorship agreement between the Black Lives Matter Global Network Foundation and International Development Exchange (IDEX), a 501(c)(3) tax-exempt nonprofit. (The same year IDEX was renamed Thousand Currents.) On 16 October 2017, BLMGN was registered as a "corporation" with the status "exempt" in the state of Delaware.

Still, it does not seem logical, according to Bishop: "Typically, fiscal sponsorship is used when a national disaster occurs, i.e., Hurricane Katrina, when there isn't enough time to form a charity lawfully, and it must rely on an existing charity as its sponsor. It was never meant to be a permanent relationship like BLMGNF and Thousand Currents", he explains.

The Black Lives Matter movement was founded by Alicia Garza, Patrisse Cullors, and Opal Tometi in 2013 and went on to prominence during the Ferguson protests in 2014-2015. Reports said that amid the Ferguson unrest, celebrities and tycoons funded the movement and bailed out protesters.

In November 2015, Politico revealed that "the biggest donors on the left" considered funding the movement and arranged a meeting with BLM leaders at the annual summit of the Democracy Alliance. It's unclear whether any deals were struck, yet two major questions arise: first, why it took so much time for the socially active movement to properly set up an organisation; second, why they have shied away from kicking off a full-fledged charity over the past seven years given that their audience and big donors were willing to donate.

Besides this, the fiscal sponsorship agreement typically requires the sponsor to send comprehensive information to the IRS on how its partner's donations have been spent and make "Form 990" and audits public.

Although Thousand Currents' 2019 Consolidated Statement of Functional Expenses (page 5) describes how the non-profit spent the money during the year, the report does not detail how BLM used the $1,799,165 received from the sponsor in 2019. Neither does the charity provide any copies of fiscal sponsorship agreements with the BLM Global Network that could have shed some light on the conditions of their cooperation.

"Thousand Currents in its 2019 annual financial statements (page 7) discloses that it provides fiscal sponsorships but does not disclose the arrangements. There is no transparency to the donors", Bishop emphasises.

The charity did not respond to a Sputnik journalist's request for copies of fiscal sponsorship agreements with the BLM Global Network, as well as details of the latter's financial spending in 2019.

Why is BLM Using ActBlue in Addition to Thousand Currents?

While it's Thousand Currents who is meant to raise money for the BLM Global Network, there's yet another tax-exempt entity doing the same job for the foundation, namely ActBlue Charities. Once a netizen pushes a donate button on Black Lives Matter's official website, he or she is redirected to ActBlue.com, a Democratic and progressive fundraising group.

"I donated to BLM Global Network Foundation to trace the disposition of funds, and it passed through the leftist organisation ActBlue's credit card system", Bishop recollects. "The receipt showed a donation to BLM Global network, and the tax donation receipt was for ActBlue Charities. This is deceitful. I sent an email accusing ActBlue of diversion of funds, and it responded by disclosing that the funds were forwarded to Thousand Currents".

According to investigative journalist John Solomon, the progressive fundraising group "takes a cut of all donations before passing it along". Given the amount of donations intended for BLM, it appears that this partnership is quite profitable for ActBlue. One could ask as to why the BLM Global Network is using such a scheme. Additionally, the scheme does not add to the transparency of BLM's already opaque financial operations, according to the Wall Street analyst.

"Sending money to 'BLM' from ActBlue through Thousand Currents likely implicates all purported organisations and others in charity solicitation frauds that cry out for policing, swiftly", Charles Ortel opines.

However, neither the Black Lives Matter website, nor ActBlue elaborated how the funds are being transferred or how much money ActBlue sent to Thousand Currents to support purported BLM activities in 2019, in response to a Sputnik journalist's request.

The controversy surrounding BLMGN does not end here, according to Bishop and Ortel.

"My interpretation of the IRS statutes is that if BLMGN wanted to promote social justice activism, it can't be in a charity, but a social welfare organisation 501(4)(C)", the retired CPA says. "Even then, it is questionable since the BLM movement is, in my opinion, promoting destructive anti-social behaviour. Also, 501(4)(C) charities are prohibited from using fiscal sponsorship. Thousand Currents should have a written agreement with BLMGN to fund targeted activities".

On the other hand, if the BLM Global Network positions itself as a "charity" it should be "strictly barred from using any BLM resource to promote or advocate against a political candidate", emphasises Charles Ortel.

The organisation has recently kicked off a WhatMatters2020 campaign "to maximise the impact of the BLM movement by galvanising BLM supporters and allies to the polls in the 2020 US Presidential Election".

Though the foundation does not name its preferred candidate, it is clear that it's not the incumbent president: last Friday, the BLM Global Network's co-founder Patrisse Cullors told CNN that Trump "not only needs to not be in office in November but he should resign now". Does this mean that the BLM Global Network supports a Democratic candidate?

President "Trump not only needs to not be in office in November but he should resign now," says co-founder of the Black Lives Matter Global Network Patrisse Cullors. "Trump needs to be out of office. He is not fit for office." pic.twitter.com/T6mLZ11cEv

​In September 2019, the group published a statement on its website in response to the first 2020 Democratic national debate, calling upon Democratic candidates to focus on the aspirations of black voters. "Traditionally, Black folks are the Democratic Party’s most loyal constituency", Cullors admitted in the statement. "Since 1964, no Democratic presidential candidate has captured less than 80% of our vote".

Earlier, Cullors acknowledged in an interview with Morgan State University Professor Jared Ball in 2015 that the organisation "do[es] have an ideological frame" and that she and another founder, Alicia Garza, are "trained Marxists". Judging from the BLM Global Network co-founder's own words, the organisation is left-leaning and promotes a "progressive" agenda.

Bishop, meanwhile, draws attention to the fact that one of Thousand Currents' co-directors is Susan Rosenberg, who worked with Weather Underground, a radical left-wing organisation, and was sentenced to 58 years in prison on weapons and explosives charges in 1985. Having spent 16 years in jail she was pardoned by President Bill Clinton in the last days of his tenure.

"The 'movement' appears wedded to tearing down the current system which, if true, is certainly not a lawful, tax-exempt purpose", Ortel underscores. "Charities receive exemption from taxes because they, in theory, lessen the cost and burden of government. What we see so far, in the words and actions of many BLM 'leaders' is not peaceful, potentially charitable activity, but incendiary insurrection that should, in many cases, be prosecuted".