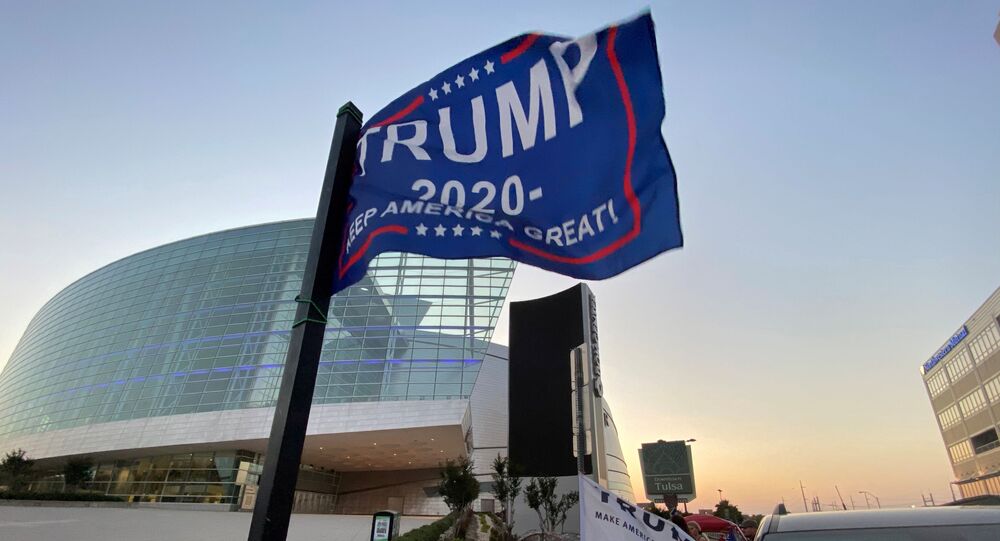 US President Donald Trump on Wednesday revealed that he seeks to turn the nationwide protests to his political advantage. Speaking to supporters in Phoenix Arizona, the most recent venue for the Republican’s 2020 presidential campaign, Trump vowed to prevent “the left-wing mob” from pushing the US into chaos.

A week ago, Brandon Straka, a self-described former liberal and founder of the #WalkAway movement, which encourages and supports those on the left "to walk away from the divisive tenets endorsed and mandated by the Democratic Party", was kicked off an American Airlines flight for refusing to wear a face mask when asked to do so, in what was viewed by the crew as a violation of the new COVID-19-induced rules.

Sputnik has reached out to Straka, who was travelling from New York’s LaGuardia via Dallas to Tulsa, where US President Donald Trump was due to hold a rally, to find out more about the incident and to discuss Trump’s campaign as well.

Sputnik: So, what exactly happened when American Airlines did not let you on the plane without a mask? How would you explain the public outrage this incident caused?

Brandon Straka: Well, I got on the plane as I do, I travel often three or four times a week for my work, so it's not unusual for me to be on an aeroplane and I've never worn a mask of any of the times that I've travelled within the last three months and it's never been an issue. No one has ever called it to my attention. But on this particular day, I think an overzealous flight attendant came to me and said, 'Where's your mask?'; I said, 'I don’t have one'.

She said, 'you have to wear a mask or you'll be kicked off the plane'. I said, 'that's actually not a law' and she said, 'it is the law' and we got into a bit of a debate about that. Another flight attendant got involved, also sort of corroborating her version of events that this was a law, which it is not, and then eventually the pilot got involved and the manager got involved. At that point, I just said, you know, it's really shocking to me that nobody has even bothered to ask me if I have a condition or anything that prevents me from being able to wear a mask.

One of the announcements that they make when you get on an aeroplane always is to please be courteous and respectful to those who are unable to wear a mask. So, their own policy is that not everyone has to wear a mask if they have a reason why they cannot, and nobody bothered to ask me that. I was trying to call that to their attention and next thing I knew I was asked to get off the aeroplane, which I did, and they rescheduled me on a couple other flights and I didn't wear a mask on the following two flights on American that day and no one said anything about it.

Sputnik: Why didn’t we see the same outcry over health security in response to the BLM protests?

© REUTERS / Ringo Chiu
Why Black Lives Matter Global Network's Fundraising Bonanza Rings the Scam Alarm
Brandon Straka: Bottom line because I'm a Trump supporter and because Black Lives Matter aligns with a leftist progressive ideology. Specifically, as Black Lives Matter has stated very specifically recently their ultimate goal is to get rid of Donald Trump. The very same media and the very same politicians who are telling the rest of us that we have to close our businesses, forego our pay checks, go into financial ruin, socially distance, wear masks, adhere to stay-at-home orders... are now celebrating and championing the reverse of those very things for anyone who goes out to protest Black Lives Matter or Antifa groups.

They're celebrating that these groups are gathering by the thousands. They're not wearing masks. They're not socially distancing. They're not following stay-at-home orders but they know that they are allowing and enabling these groups to go out publicly and do this, while they capture it on camera and put it on the national news constantly. This is exactly the same kind of tactics that they used in 2016, which backfired spectacularly, and I imagined it will backfire again. Ultimately, there's just a double standard that exists. That if you're fighting for a cause that they deem to be worthy or appropriate then there are no rules.

Sputnik: You’ve been to Trump’s rally in Tulsa, Oklahoma this weekend. How will you describe the atmosphere there?

Brandon Straka: The atmosphere in Tulsa was really incredible. I mean people were outside waiting for days in the heat and in the sun. By the time we got inside there was still just tremendous energy.

I think for a lot of people, it felt great to just be out in public again; be around people, the MAGA movement, which feels like family. There's every type of person there; there's black, brown, white, gay, straight, every type of American comes together at a MAGA rally and so I think it just felt really incredible to feel like people were amongst family again.

Sputnik: How would you assess the media coverage of the rally, as we’ve seen reports about empty places and Trump supporters ‘leaving him’?

Brandon Straka: It was widely misreported about the numbers at the rally. I was there, I would estimate that there were easily 12 to 14,000 there. That was my guest that night and then I started reading reports about how the arena was half empty, about how there were 6,200 people there, which is positively absurd. There were some empty seats up on the third level, that is true, but you also have to take into account that I think the majority of the older demographic that supports Donald Trump probably felt fearful about coming out to the event.

There were Black Lives Matter protestor standing outside that were preventing people from being able to get inside and were actively intimidating and threatening people that were trying to get inside. There were actually quite a lot of people that didn't get inside not to mention that it's being reported that there was a section where they were taking people's temperatures to get inside, and that the volunteers taking in temperatures had been ordered to leave their posts, so people were not able to get past that security barrier.