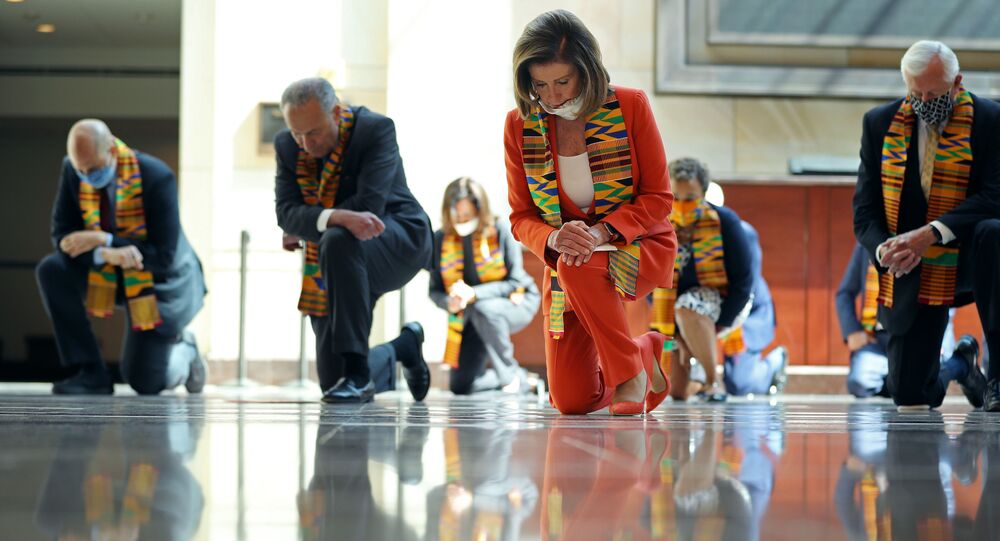 Democrats are trying to capitalise on the ongoing Black Lives Matter movement in the same way that they earlier sought political points by bashing the administration of US President Donald Trump for its response to the coronavirus, say pundits, while asserting that Dem party political struggles are costing ordinary Americans.

On 16 June, US President Donald Trump inked a new Executive Order on Safe Policing for Safe Communities, an attempt to improve policing and prevent abuse by law enforcement agents. During the Rose Garden signing ceremony the president said that he had grieved for lives lost and expressed support to those "brave men and women in blue who police our streets and keep us safe".

"To go forward, we must seek cooperation—not confrontation. We must build upon our heritage—not tear it down." pic.twitter.com/1xUxkr3BAP

Democrats immediately subjected Trump's new executive order to harsh criticism: "One modest inadequate executive order will not make up for his decades of inflammatory rhetoric and his recent policies designed to roll back the progress that we've made in previous years", said Senate Democratic leader Chuck Schumer.

'Democrats Oppose Almost Everything Trump Does'

Earlier this month, House Democrats crafted a police reform initiative entitled the Justice and Policing Act amid Black Lives Matter (BLM) protests over the killing of George Floyd, a 46-year old African American, by white police officers in Minneapolis. Democratic mayors and governors have lent a sympathetic year to BLM calls for defunding or even dismantling police forces nationwide.

It is no surprise that none of Trump's initiatives have received praise from the Democrats, says Paul Valone, a political commentator and executive director of Rights Watch International, suggesting that the Dems seek power only and not compromise.

"At present, the US is in the throes of a political power struggle, the likes of which have not been seen since the American Civil War", Valone suggests. "In their quest to recreate the US as a socialist (and, quite probably, autocratic) state, elements of the left have demonstrated there is little they won’t do to gain power. In particular, they are bent on denying President Donald Trump, who has proven himself a traditionalist, a second term in office", the pundit opined.

Valone's thoughts parallel the way Democrats have criticised Trump for his handling of the COVID pandemic and the way the White House addressed its response to the massive nationwide George Floyd protests. The Dems decisions contradict each other, the political commentator notes, adding that the opposition party may not be aware of the purported contradiction.

"Democrats have assumed contradictory positions on the coronavirus pandemic, first condemning the re-opening of the economy, which would facilitate Trump’s re-election, and almost simultaneously promoting mass protests which worsen the pandemic but also damage Trump’s re-election prospects", he offers, claiming that "rationalization of the contradiction has been, at best, superficial".

Daniel Pipes, an American historian, writer and commentator, echoes Valone, saying that the Dems "loathe Donald Trump in an acutely emotional way" and "oppose almost everything he does. If their opposition on COVID-19 contradicts their opposition on Black Lives Matter, they hardly notice or care", he opines.

Klaus Jurgens, political analyst and journalist, agrees with both conservative Trump supports, as, according to him, it seems that the Democratic Party both "tries to misuse COVID-19 as presidential election vote harvester" and "cash in on police mismanagement" when it comes to the Black Lives Matter protests.

The political analyst asserted that while Trump did not "invent" the global COVID-19 pandemic, nor trigger recent racial tension: "Bias towards non-white citizens is an unfortunate reality in the USA and it was there during Barack Obama and Ronald Reagan and is still there under Donald Trump", Jurgens offers, adding that "the Democrats did as little as the Republicans to erase it for good".

According to the sentiments of the political analyst, the methods under use by the Dems are not how a "trustworthy opposition" should deal with sensitive national issues.

Democrats, alongside Republicans, have not only fallen short on improving the situation, they appear to be fanning the flames, claims Valone.

"Violent protest and false accusations of systemic racism in law enforcement, combined with efforts to literally abolish police departments, are designed to tear down the present social and economic structure, enabling leftists to replace it with a socialist authoritarian model", the commentator claims, not ruling out a threat that the left may refuse to accept the legitimacy of a Trump victory in the November elections.

While Democratic mayors are pushing ahead with defunding or even dismantling some parts of police forces in a bid to mitigate racism and police brutality, some African Americans do not support the idea.

On 15 June, Rep. Karen Bass, the chairwoman of the Congressional Black Caucus, suggested that calls to "defund the police" are "one of the worst slogans ever", as it misdirect away from the real problem of the defunding of social services in those communities that need it most. "We have not invested in health, social or economic problems in our communities and we leave the police to pick up the pieces", she said during a Washington Post live broadcast on Monday. "Police officers should not be responsible for cleaning up society's problems".

We have not invested in health, social or economic problems in our communities and we leave the police to pick up the pieces.

Police officers should not be responsible for cleaning up society's problems.

We need to rethink public safety and invest in solutions that work. pic.twitter.com/m414Z03Iex

​A recent YouGov/HuffPost poll indicated that the idea of “defunding the police” has little support from the public and the black community in particular, with about a quarter of African Americans endorsing the initiative and 49 percent opposing it.

A majority of US blacks, however, acknowledge that "the system is not sound at all and requires significant changes" and are calling for massive police reform.