New Delhi (Sputnik): Despite implementing the world’s most extensive lockdown for around two months, the approval rating of Indian Prime Minister Narendra Modi is up; making him more popular than other world leaders. However, some have criticised India's government for using military assets to express solidarity with those fighting COVID-19.

Prime Minister Narendra Modi-led government in India, along with the service chiefs, faced flak for deploying military assets across the country, including at sea, to express gratitude towards civilian front-line workers on Sunday.

“Given the deep resources of transport, logistics, medical facilities and manpower, our military could have served citizens in meaningful ways and even helped repatriate starving, itinerant migrants in an organised manner. But if flypasts and petal showering is considered their optimal use; so be it,” Arun Prakash, former chief of the Indian Navy tweeted.

© AP Photo / Aijaz Rahi
Indian Armed Forces Express Gratitude Towards 'Corona Warriors' with Flypasts Even as Cases Grow
Indian Prime Minister Narendra Modi had welcomed the announcement of showering petals and flypasts across the country and said that India had waged a strong fight against COVID-19 due to the courageous frontline warriors.

Contrary to popular opinion, there are those as well who have justified the act, saying that it is akin to the training and logistic activities carried out by the armed forces.

“A common man can be fooled by all these cover-up words, but not professionals who know the inside systems,” Lt. General Rameshwar Roy (retired) said.

In spite of criticism from a section of media and political parties, US-based Morning Consult Political Intelligence earlier this week revealed that Modi's approval rating in India had soared to 68 percent in comparison to 63 percent in January this year.

Political analysts who have followed his work since the early days of his career have said that it is one of the intrinsic aspects of Modi’s politics.

“Modi was an active member (Pracharak) of Rashtriya Swayam Sewak Sangh (RSS). The quality to manage the crisis in very effective manner comes only from the experience he gained during early days of his life,” Harshvardhan Tripathi, Senior Fellow at Shayama Prasad Mukherjee and close onlooker of right wing organisations in the country, told Sputnik. 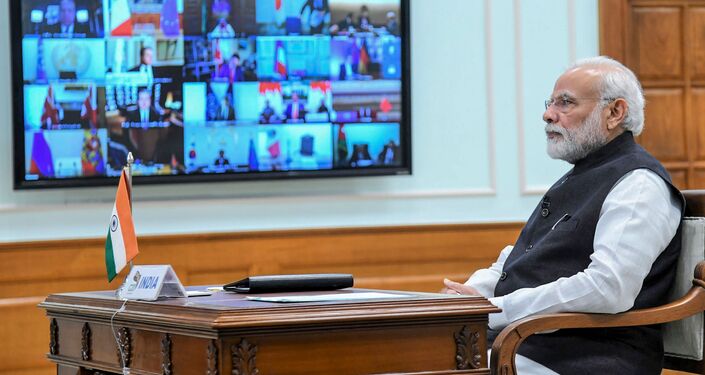 © AFP 2020 / HANDOUT
In this handout photo taken and released by Indian Press Information Bureau (PIB) on March 26, 2020, India's Prime Minister Narendra Modi attends a videoconference with G20 leaders to discuss the COVID-19 coronavirus, in New Delhi
Ahead of rising to prominence in the national legislature, Modi had experience in handling the Machhu Dam disaster in 1979, the 1998 Kandla cyclone, and the Gujarat drought in 2000.

The 2001 earthquake — which completely destroyed over a million houses in several districts of his home state Gujarat — was his first challenge to tackle disaster as an administrator. With the help of around 3,000 engineers, Modi, who was the then chief of Gujarat, not only rebuilt it but made it one of the country's best-performing states within six months.

The attempts of garnering public support for the lockdown announcement surprised political analysts during the first phase itself, when the general public clapped and lit lamps in response to a televised appeal by Prime Minister Modi to express solidarity towards medics and front-line workers.

“Prime Minister Modi has, time and again, proven his skills to shift an adverse situation in his favour, whether it was the Bhuj earthquake, the Kedarnath floods or Kashmir. The COVID-19 situation is completely different from any other crisis but he believes in his temperament while managing the situation with public support,” Tripathi added.

© REUTERS / Amit Dave
Economist Zeroes in on Five Steps India Must Take to Remain Relevant in Post COVID-19 World Order
After announcing lockdown on 24 March, Modi had categorically stated that saving lives was important but later he decided to open the economy partly to restore the livelihood of millions of migrant labourers, farmers and people engaged in medium-scale industries.

Even though economic activities are going to restart in 80 percent of the country from Monday, Modi has spent at least half of the last 60 hours planning to boost the economy including searching new markets across the globe for industries. He has invited suggestions from 35 state chiefs and industries on the way to ease the restrictions, which have been in place for the last 40 days.

“In every fight against crisis, Modi followed three basic principles: impose faith in the country’s federal structure, evoke cultural values among  countrymen and motivate the party cadres,” Tripathi reasoned for symbolic gestures such as showering petals on health workers.

The 69-year-old knows that in a country with a population of 1.3 billion, you must evoke cultural values or nationalism to bind all the people into one thread and without the support of millions of BJP and RSS voters, else he will not succeed merely as a government functionary. 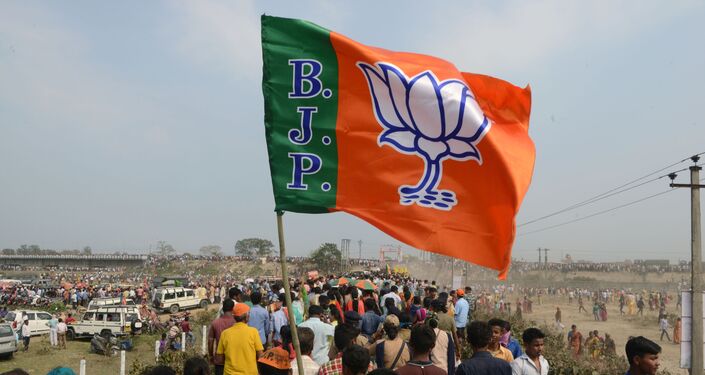 © AP Photo / DIPTENDU DUTTA
Indian supporters of the Bharatiya Janata Party (BJP) carry a party flag on their way to attend a campaign rally while wearing masks of Indian Prime Minister Narendra Modi ahead of the national elections in Siliguri on April 3, 2019

Modi, who spent almost six years as Prime Minister, analysed the COVID-19 crisis as a bigger challenge than the two World Wars in the early days of the outbreak. However, economic conditions across the world compounded his challenge, which is already more gigantic in proportion than any other crisis he handled in the past.

But, as mortality rates remained lowest in the world among countries where over a million people live, and the prediction by the International Monetary Fund about the country’s economic growth rate (1.9 percent in 2020), people imposed immense faith in his leadership, as evident from his approval ratings by Morning Consult Political Intelligence.