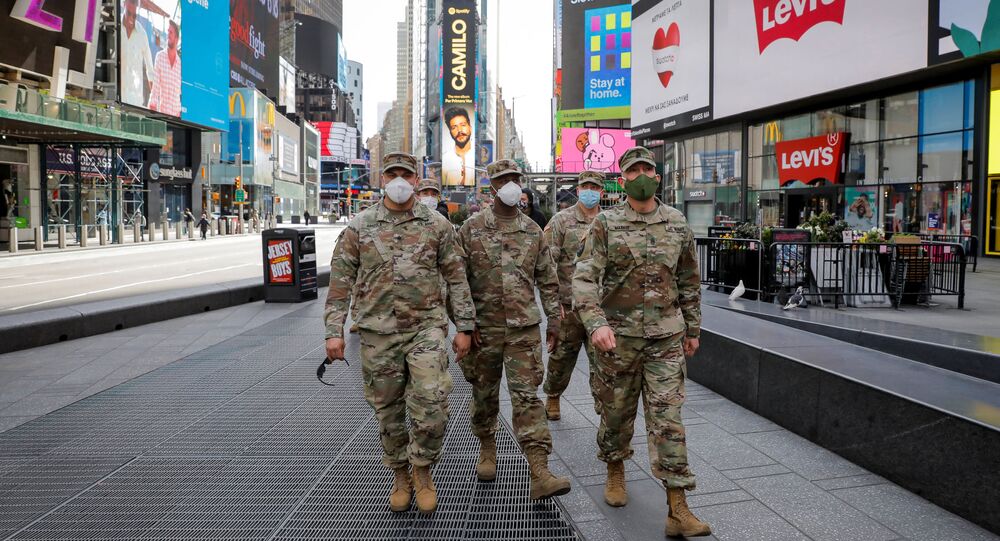 The Capital Region's joint military task force activation and mobilisation of National Guard troops have prompted speculation about a looming government evacuation and introduction of martial law amid the COVID-19 pandemic. US security and political observers have debunked the claims, suggesting that the media is deliberately stirring up fears.

"The recent alarm bells being sounded in some Western media about a military takeovers of the US government because of the coronavirus infection rate increases in the Washington DC, Maryland, and Virginia regions are being greatly over exaggerated, most likely for anti-Trump propaganda purposes", says Scott Bennett, a former US Army officer and political analyst, bemoaning that the "media talking heads on CNN, NBC, and other networks… simply parrot propaganda designed to grow uncertainty, fear, and chaos in order to grow the American police state".

On 16 April, Newsweek sounded the alarm over the activation of the Joint Task Force National Capital Region (JTF-NCR), a 10,000-strong military grouping charged with protecting and evacuating US civil and military leaders from Washington DC and surrounding counties. According to the magazine, the activation is no coincidence, as Washington DC, Maryland, and Virginia may face a New York-like epidemic, "that could potentially cripple the government".

"The simple fact that the military has been activated in certain aviation commands and homeland security-type missions does not mean that the government relocation is imminent", argues Bennett. "The coronavirus, for all of its paranoia and propaganda, does not rise to this level. It is rapidly being exposed as a psychological operation exploiting people’s natural fear of invisible viruses and diseases to exercise hyper-control over the population and test the limits of citizenry’s willingness to submit to violations of their Constitutional rights".

There is nothing particularly alarming about the JTF-NCR standby mode, echoes Dr Philip Giraldi, a former CIA case officer. He notes that he frequently sees helicopters flying overhead practicing evacuation procedures in Virginia, about 50 miles from Washington, which is not too far from where he lives.

The Joint Force Headquarters National Capital Region (JFHQ-NCR) has been carrying out "secret" aerial trainings in the capital area for quite a while already, according to July and December 2019 Bloomberg reports. The mission, involving at least 10 UH-60 Black Hawk helicopters, has been going on since 1 October 2018 and is reportedly aimed at responding to a terrorist attack or natural disaster, with its duration "undetermined".

The government evacuation would only take place if the situation gets very bad and if there would be civil unrest so bad that the police would be unable to handle the situation, the CIA veteran explains.

"It would also be a sign that the government is losing control of the country", Giraldi says. "I think there will be considerable unrest due to failure to fully contain the coronavirus, but we are not at the point yet to panic. Not yet anyway".

It is unlikely that the government evacuation operations would require JTF-NCR's 10,000-strong personnel, believes Mark Avrum Gubrud, an adjunct assistant professor in peace, war, and defence at the University of North Carolina. It is similarly "difficult to see how the pandemic itself would create a need for such an evacuation", he adds.

However, the professor worries that the JTF-NCR mission may create "risks of the abuse of authority, and even a potential for the inappropriate use of force against the public".

The rumours about the potential use of military force and even an introduction of martial law have been swirling despite the Pentagon's reassurances after thousands of National Guard troops were mobilised in every US state and territory in response to the coronavirus pandemic.

"The rumours that the National Guard may enforce martial law in the United States are demonstrably false", asserts William C. Banks, distinguished professor emeritus at Syracuse University College of Law. "Martial law is not authorised by the Constitution or any other law in the US. Instead, it is defined by the absence of law. Martial law can only occur where existing institutions of government, including the courts, are closed and unable to function".

Those circumstances "do not and almost surely will not exist here", according to Banks. Being controlled in each state by the governors, the US military may, as they are now, provide critically needed public health and logistical support, the professor elaborates.

"These claims are false", agrees Robert James Spitzer, an American political scientist and commentator "There is no plan, or reason, for declaring martial law in the US. It is a rumour designed only to sow doubt and anxiety among Americans about their government".

"We have found nothing to support conspiracy rumours surrounding supposed deployment of the National Guard or other conjectured usurpation of power by the federal government", echoes Paul Valone, a political commentator and executive director of Rights Watch International.

The political commentator observes that the First and the Second Amendment – the individual right to keep and bear arms – provide the first and second layers of protection against potential attempts at abuse of power: "As such, it provides significant motivation to keep politicians’ actions within the limits of the US Constitution", he concludes.