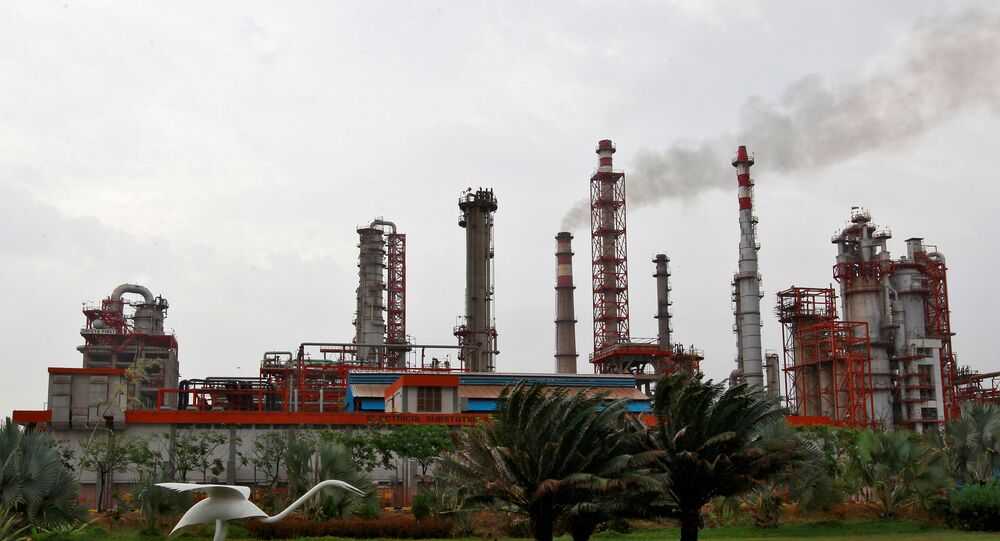 As the prices of WTI crude oil crash at historic lows this week, there is wider debate whether India, which buys Brent crude oil, will benefit from the plunging numbers.

“Some refineries are designed primarily for Middle East crude but most of the newer refineries can take any crude, so India can buy much more from US,” former secretary of the Indian petroleum ministry, SC Tripathi, replied to Sputnik, as many suggest that Indian refineries can be used to process crude oil from Middle-East countries.

India--whose 83-percent domestic requirement is met through imports--primarily purchases oil from nations including Saudi Arabia, Iraq, and Kuwait. However, in recent years, the Indian government has diversified oil purchases as a means of forcing lower prices from OPEC producers.

India, being the world’s third largest buyer of crude oil, has been spending around $85 billion on oil imports annually, and Delhi has estimated that a drop of $10 per barrel in crude prices could save the nation some $15 billion.

Earlier, it was expected that shipping costs for crude oil from US to Asia would fall after May but, according to a report in the Wall Street Journal, VLCC (very large crude carriers) ships that can transport up to 2 million barrels of oil, are charging $72,500 a day for a year-long contract, compared to $30,500 a day a year ago.

Apart from extraordinarily high shipping costs, Tripathi pointed to restrictions in the export of US crude oil.

“India is already purchasing from the US but in small quantities as transport was taking longer and becoming costlier. Also, the US was not allowing free export and every consignment required an export license from the US,” Tripathi said.

Global petrochemical energy giants, including BP and Total, are scaling up crude oil reserves, taking advantage of the low prices. However, given the storage capacity for India's strategic oil reserve, experts suggest that country can not save much from lower prices.

“India has limited capacity for the storage of oil so that option is there but limited in terms of the size and capacity. Absolutely. India should expand the storage capacity,” Narendra Taneja, one of leading energy expert of country, said.

Nevertheless, Delhi has begun building a 6.5 MMT strategic petroleum reserve at two locations, Chandikhol in the eastern state of Odisha, and Padur in the southern state of Karnataka.