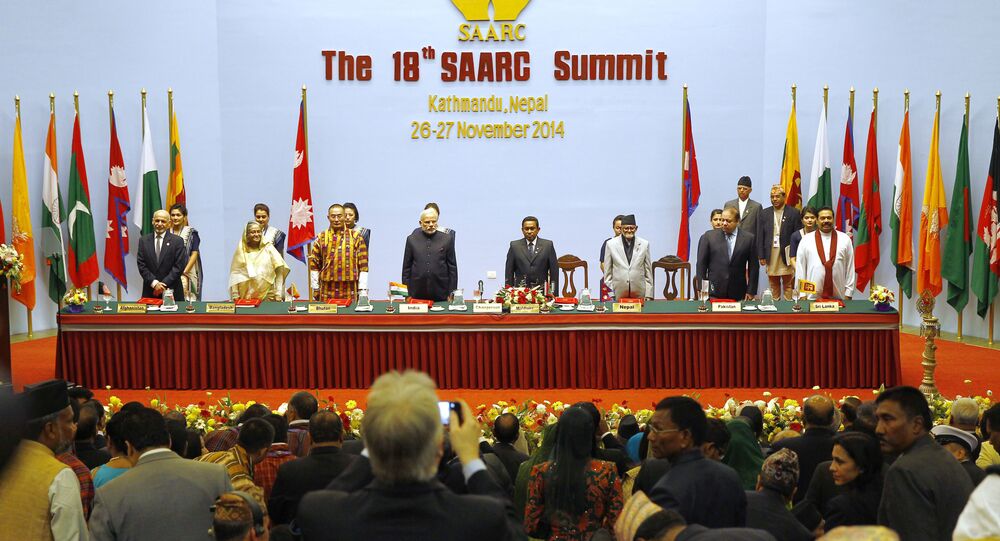 New Delhi (Sputnik): The eight-member South Asian Association for Regional Cooperation (SAARC) was founded in 1985 with the aim of achieving regional and economic cooperation. However, its relevance and existence has become questionable due to the ongoing conflicts between India and Pakistan.

Disagreements over the distribution of COVID-19 emergency funds among member states has not been the only time that Pakistan has impeded India’s effort at the forum, but it certainly indicates that any revival of SAARC remains a distant dream, says former Indian diplomat Gopalaswami Parthasarathy.

“I find it a waste of time to be involved in an organisation where Pakistan does not share the views on free trade, investment or anything with others”, he explains.

The COVID-19 emergency fund is an Indian initiative where member countries distributed funds as per their capability to tackle the pandemic in the region. After pledging to contribute $3 million, Pakistan, last month, demanded that the fund should be “administered by the SAARC Secretariat and that the [means] for the fund’s utilisation should be finalised through consultations with the member states as per the SAARC Charter”.

The annual summit of SAARC had been suspended after India and other member countries boycotted the 2016 scheduled meeting in Islamabad following a series of militant attacks on Indian military camps.

Parthasarathy, who was previously Indian High Commissioner to Pakistan, believes “SAARC has been undermined and destabilized by Pakistan and most of its time is wasted in raising erroneous, irrelevant issues like making China a member of the SAARC.”

While China is one of the nine observer members in the organisation, talk of China joining SAARC as a permanent member were raised in 2014. The proposal was immediately rejected by India while Pakistan supported it. Back in 2014, Liu Zongyi, a scholar at the Shanghai Institute of International Studies, had even termed it as India’s “attempt to retain its supremacy in the South Asian bloc”, adding that its arch rival is "afraid" that an anti-India group will take shape if China joins the eight-member forum.

Pakistan has failed to comply with SAARC agreements time and again, the former Indian diplomat points out while noting that Pakistan did not even get to the first stage of implementing the free trade agreement.

“It (Pakistan) has refused to implement the SAARC Free Trade Agreement. SAARC will not remain relevant as long as Pakistan continues behaving the way it has behaved. We had a long term plan. We decided that SAARC will become a free trade area by 2010, a customs union by 2015, and a common market by 2020,” says Parthasarathy.

Pakistan, along with Afghanistan, Bangladesh, Bhutan, India, Maldives, Nepal and Sri Lanka, signed the South Asian Free Trade Area (SAFTA) — a free trade arrangement of the SAARC which came into force in 2006 — but was never implemented.

“It is question of being practical. With the south Asian free trade agreement being implemented by every country except Pakistan, it is not relevant to pursue Pakistan. Pakistan doesn’t seem to understand that we have common borders with everyone except Afghanistan. They don’t have common borders with anybody in SAARC. We have got land connectivity, we have got sea connectivity, and we don’t need Pakistan. In case of Afghanistan, we use the Iranian corridor through Chahbahar,” Parthasarthy emphasised.

Raising security concerns by claiming that India would steal sensitive information, Pakistan even backed out of the ambitious SAARC Satellite project after welcoming the idea in 2014. Now the South Asia Communication Satellite project caters to th ecommunication needs of all SAARC members - except Pakistan.

Pakistan had asked to be a partner and insisted on being part of technical team while sharing costs with India. However, its demands were rejected.

Parthasarathy terms the Bay of Bengal Initiative for Multi-Sectoral Technical and Economic Cooperation (BIMSTEC) as the next best alternative to SAARC.

“We have found that we will have to look at an organization which excludes Pakistan to go ahead with regional cooperation. BIMSTEC was started for different reasons as part of ‘Look East’ but BIMSTEC fitted the bill. At the same time, there are separate agreements going on with Afghanistan and Maldives, which are not part of BIMSTEC,” he says.

Found in 1997, BIMSTEC is an international organisation consisting of Bangladesh, India, Myanmar, Sri Lanka and Thailand, Nepal and Bhutan.

However, SAARC members, who are also part of BIMSTEC, do not see it as an alternative. Even though Bangladesh, Bhutan and Sri Lanka snubbed the SAARC summit in Pakistan in 2016, in the past years they have been reiterating the relevance of resuming talks among SAARC nations, including Pakistan.

Recognising terrorism as the single largest threat to peace and stability in the south Asian region and the world, SAARC members agreed on cooperation among states under the Bangalore Summit in 1986 Declaration while terming the methods and practices of terrorism as criminal. The member states have also signed the 1987 SAARC Regional convention on Suppression of Terrorism.

Emphasising that India doesn’t need Pakistan, the former diplomat says “in terms of terrorism, we have cooperation with everyone”. He mentions how India warned Sri Lanka about the deadly terror attack in 2019.

Parthasarthy says that India will never get tired of trying to revive SAARC and “our efforts are genuine”.

The SAARC members —Afghanistan, Bangladesh, Bhutan, India, Maldives, Nepal, Pakistan, and Sri Lank — are currently dealing with the COVID-19 outbreak and have contributed to an emergency fund to fight the pandemic.

‘Each Member to Decide Implementation’: India Hits Out at Pakistan on Use of SAARC Emergency Fund