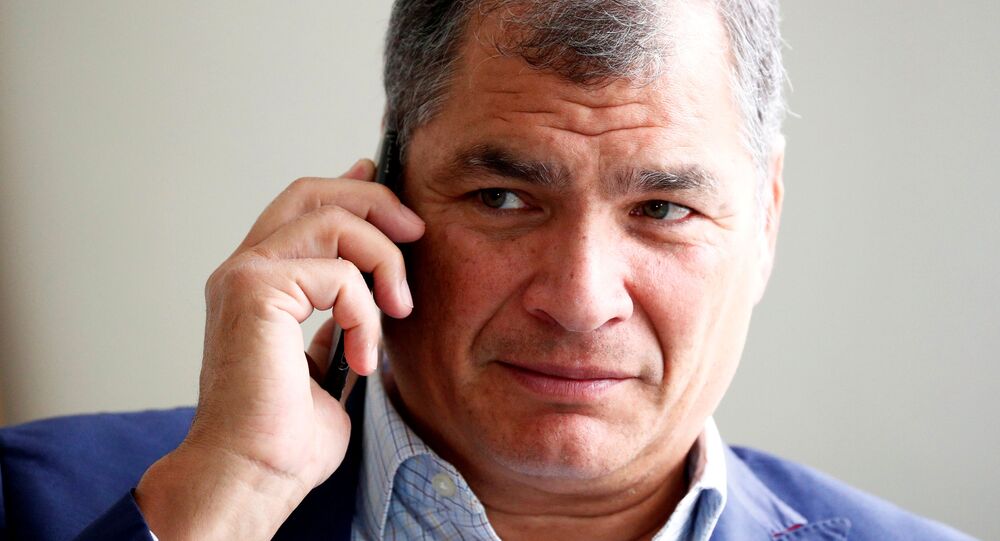 A top court in Ecuador found the country’s former President Rafael Correa guilty on corruption and bribery charges, and sentenced him to eight years in prison on Tuesday. Though the decision was handed down by the court, one expert tells Sputnik that sitting President Lenin Moreno is at the heart of the conviction.

"Well, this was what they were looking for: managing justice to achieve what they could never do at the ballot box. I'm fine. I am concerned about my colleagues,” Correa said following the Tuesday decision. “Surely we will win internationally, because everything is bulls**t, but it takes years. It depends on your vote that this nightmare ends.”

​Denis Rogatyuk, an independent journalist, writer and researcher, joined Radio Sputnik’s By Any Means Necessary on Wednesday to discuss the convictions handed down by the Ecuadorian court and provide insight regarding possible corruption in the current Ecuadorian government.

Rogatyuk explained to hosts Sean Blackmon and Jacquie Luqman that this is not the first time Correa has been charged by the Ecuadorian attorney general, as he has had “at least 25 other legal cases against him on various charges - most of them lacking procedure, [lacking] evidence, being politically motivated or a combination of all three.” Because of this, none of the previous cases “stuck,” he noted.

According to Rogatyuk, this case is different because there is alleged hard evidence showing the acts of corruption carried out by Correa and the prosecutor’s reported cooperation with former functionaries of his administration, including a receipt issued to former legal secretary to the presidency Alexis Mera during Correa’s presidency. The alleged receipt listed an $80,000 transfer of funds to his administration from an unknown source, Rogatyuk said.

“This piece of evidence was quickly disregarded by the legal team of Alexis Mera, as it did not bear signature,” he revealed.

Likewise, Correa’s legal team has pushed back against the idea that he pocketed some $6,000 from a solidarity fund during his presidency.

“I had a recurring overdraft, and I borrowed 6,000 USD from the solidarity fund we had at the presidency (made up of our own contributions) and I paid it back to the last penny (I have monthly checks of 500 USD). Don’t be ridiculous!” Correa tweeted in August 2019, revealing his counterevidence.

“Unfortunately, these kinds of counterarguments haven’t been taken into account by the court,” Rogatyuk explained, noting the court has a number of “irregularities.” In fact, Judge Iván León - one of the justices overseeing the case - is a cousin of Moreno.

Rogatyuk went on to highlight that the entire proceedings involving Correa and others charged in relation to his case has been criticized and claimed to be a political tool for the sitting president. This belief is further fueled by the fact that Correa and former Vice President Jorge Glas were barred from running for office for 25 years.

While the entire world is dealing with the COVID-19 novel coronavirus, with varying levels of success, Ecuador is experiencing one of the worst outbreaks in Latin America. Current data from the John Hopkins University dashboard reports at least 4,450 confirmed novel coronavirus cases in the country and some 242 deaths from the contagious disease.

Rogatyuk said that the ongoing crisis in Ecuador has afforded the Moreno government more authority, which the administration has made use of to give “police and military extra powers to repress populations” and “fast-forward some of the legal cases now going through the prosecutor general - that case against Correa being one of them.”

In addition to the former president’s recent conviction, Interior Minister Maria Paula Romo claimed on April 2 that she had evidence implicating Correa as part of a fake news campaign designed to “generate chaos via social networks,” she said, as reported by Reuters.

Fausto Jarrin, an attorney for Correa, rejected Romo’s claims in a statement provided to the outlet and asserted that his client did not make “political calculations” on social media. “He does not need an apparatus to spread fake news, that’s ridiculous,” the lawyer expressed.

According to Rogatyuk, the actual numbers of COVID-19 infections and deaths in Ecuador are higher than the figures being reported.