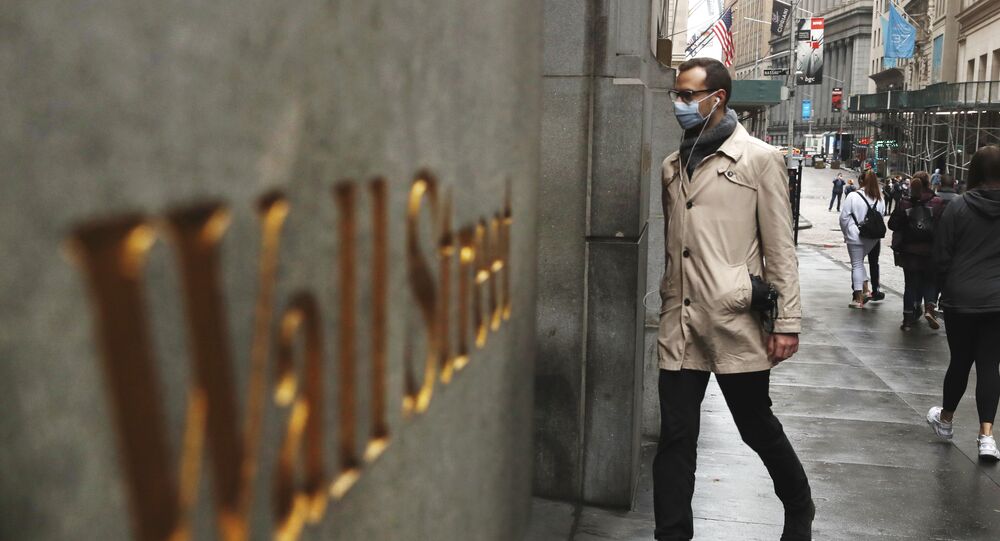 'Fear is More Contagious Than Any Virus' - Professor

Despite Thursday’s rebound, the three indices remained down more than 20 percent on the year, leaving them in bear markets. The Dow is off 29.6 percent for 2020, the S&P500 is down 25.3 percent while Nasdaq has lost 20.3 percent.

Alexander Azadgan, a professor of International Political Economy, and also the editor-at-large with United World International Analytical Centre has shared his views on the matter.

Sputnik: US stocks fell sharply with the Dow Jones index tumbled nearly 3,000 points despite the Federal Reserve’s latest attempt to ward off concerns of a possible economic downturn. How high are the chances that we might be facing the Global Financial Crisis 2.0?

Alexander Azadgan: Interesting things always happen around the election. Last time this thing happened in 2008, Mr George Bush Junior came into office with a crisis and left with the crisis. And guess what? The bailout was 700 billion dollars again. That continued with President Obama - close eight hundred billion dollars, all under the guise of saving the money. Now, this we have to entertain all sides - that could very well be true. You know, the principle of Occam's Razor is that the simplest explanation is usually the correct one.

In this case, the simplest explanation would be this is a malignant viral medical health crisis around the world. If you don't think the world economy is going to collapse; we're all going to die; it's going to be population control - blah, blah, blah. What I can tell you is that in times like this, when there is a lot of fear injected, there is a bunch of savages running around in turbans and madras and caves in Afghanistan supposedly causing 9/11, but still monster or whether it's some viral monster, wants you to know that people panic.

Value of their stocks sometimes plummets. Panic adds to panic. I always say fear is more contagious than any virus. And then they start selling. Now, who buys these things? The super-rich. The 1 percent. The Wall Street establishment. And then what happens then? We have that going to having a bull market. Bull market reaches its top and bottom because what do we, the economists, euphemistically call it? We call it a market correction, which means they're to devalue the market. The rich are going to buy.

It's going to go through a bear market and it's up and down, you know, bipolar, zero-sum game. And I think the people of the world are alert and awake to this kind of situation. If this thing gets out of control. Many retail establishments are closed. Much of that supply comes from China. They could backfire. Let's just say they are not happy with the way we're handling it, Mr Trump is handling it. After all, this wasn’t a trade war between China and the trade. But I'll tell you that a trade war is full economic warfare. Slow down to supply.

© AP Photo / Richard Drew
Dow Plunges Over 1,300 Points as US Economic Relief Plans Fail to Quell COVID-19 Concerns
The logistical might slow down. Employers will have to close the stores because of the virus and other reasons, economic and then to have to lay off people on all conditions would lend a hand to Mr Trump being in deep trouble and not getting elected. On the other hand, from a psychological perspective, whenever you have a crisis, guess what? Guess what kind of people gets elected? People would like a strong, brash, obnoxious type an over testosterone male person coming to power. So in that sense, it may help President Trump. It's like a snail.

They'll try to move on a razor's edge. I can tell you more facts until we have more. I forecast it will be more downturn in the stock market. That's a very easy forecast because that would justify the so-called quantitative easing. Quantitative easing is basically a euphemism, again, by us economists for socialism for the rich and predatory capitalism for the poor. Exactly what Bernie Sanders is saying. Regardless of whether you agree with him or not agree with him, this is exactly what it is.

Sputnik: How would you assess the financial trust towards the US after this Dow Jones fluctuation?

Alexander Azadgan: Future sometimes can only be understood when you look backwards. When you look at the last crisis in 2008, which really continued until 2012, the Chinese were expressing deep concerns. You could not believe how reckless those involved and the entire political and economic establishment were handling things. Deeply, deeply disappointed. They started dumping dollars very slowly. They don't want to shoot themselves. They have tremendous reserves of the dollars and investing in other currencies and also obviously gold and other precious metals.

So I think I have to say, our reputation, our financial reputation as a source of stable investment was blown into the wind quite a while ago. The only thing we are doing is that when we have a situation where people are not investing in the United States, what do you do? We tried to create chaos. People are investing and there are people investing and it’s nowhere as much as we are in China. So then what happens after that happens? People come back and invest in this in this market.

Sputnik: How hard can the ramifications of this economic meltdown overall be?

Alexander Azadgan: Depends on when to get a hold of this thing. We are told that it has 18 months to develop some kind of vaccination. How they come up with that number is beyond me. I can tell you what my chemists and pharmacist professors say. What we do know is that the best and the brightest are supposedly working on this day and night. It depends on when the numbers turn. The last few days ago, the Chinese are announcing that they reached the peak, and it's slowing down.

And at that point, economists will come and say, guess what? 'The market correction, self mechanism, market correction. All is good. Go back and shop'. And what happened is that they just blew some middle-class person.

Sputnik: How would you assess the media coverage of the COVID-19 outbreak?

Alexander Azadgan: Shameful. We had a very important debate Sunday night in the United States. Between the last two remaining democratic candidates - between Mr Sanders and Biden. No audience present, three senior anchors were asking questions. And very interestingly, after the debates finished, of course, they rooted for Biden establishment, liberal mainstream media in this country, mainstream established media, even though people felt that Sanders won. And then immediately after that, they ran into their fear-mongering of the virus.

I don't want to mention any news channel - just call them the fake news channel. They are covering this from a pathologically obsessive-compulsive disorder sort of way, 24/7. You have every other hour to have breaking news. In the old days breaking news used to mean something. Oh, look, you know, you have two people that are dead - breaking news. It is just being ludicrous. People are hoarding water, lots of toilet paper. I'm sure everybody has heard that joke around the world. And it's just basically ridiculous.

I really wonder what happened to the land of the free home with the wage. We have become home of the coward and intergalactically stupid. So the media coverage has been shameful. Absolutely shameful. Information is vital. We all know need to know how to protect ourselves from this thing. Don't start pandering fear and paranoia and desperation and depression and anxiety. And this is their speciality. That's how they fooled us - the war in 2001, Afghanistan, in 2003 against Iraq. That's how they sold us the war in 2011 against Libya and Syria, 2015 - against Yemen. This is what they do, and they are complicit with those behind the curtains.

Sputnik: Some analysts say that the crisis in Europe is the crisis of unity and European identity as they failed to contain the crisis and provide help for devastated Italy. Would you agree with that?

Alexander Azadgan: Yes, I would. You have the yellow vests back in the streets in France. It's getting minor coverage in US media, internal US media. I'm not talking about CNN International, I’m talking about domestic CNN for rather unintelligent people. Europe was already in a state of crisis. Europe has been - I know it’s a controversial statement I'm about to make - Europe was already being taken hostage by Mr Erdogan, with floodgates for the immigrants. Eastern Europe is in a state of crisis if this actually happens.

© AP Photo / Richard Drew
Dow Jones Slides 10% as US Share Price Worries Continue
The Turkish open floodgates in 2015. August, September, it started. And of course, Brexit has been taking place. Nobody is unknown, uncharted waters, uncharted territories. We already had all these preconditions and legitimate concerns to Europe and the virus seems to be spreading rather fast in Italy. I don't want to get into the politics of Italy. Interesting that after China and Iran, Italy is number three. You just have to see how this plays out. Decisions are being made at the highest echelon of power in Brussels and in Washington. And based on those decisions, especially economic decisions, then we can go ahead and analyze it and see it.