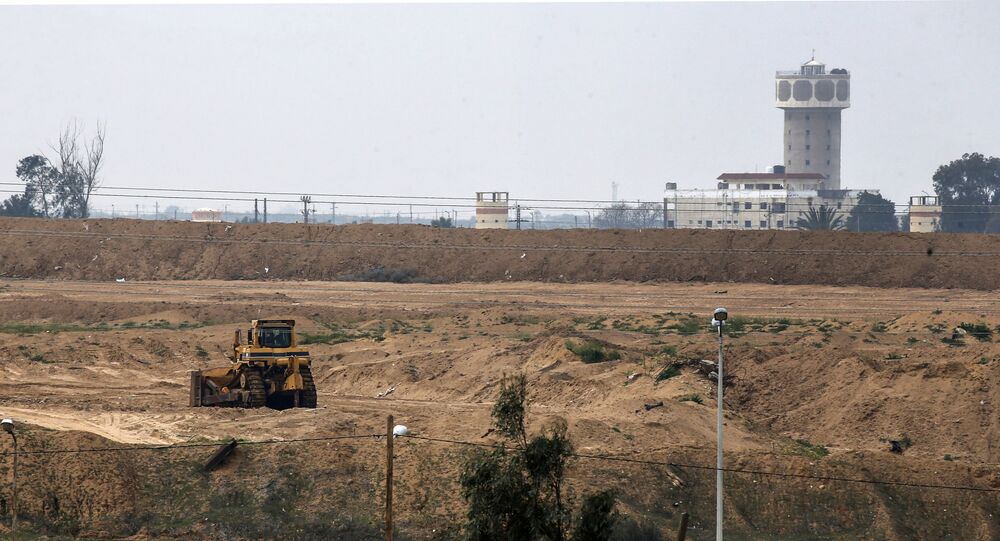 Egypt's military has spotted a three-kilometre-long tunnel running from the Gaza Strip to the heart of the Egyptian border town of Rafah and said that it's not planning to sit idly by, watching how Gaza-based militants undermine the country's security.

In late February, Egypt began the construction of a new border wall along the Gaza Strip, saying the goal was to prevent the infiltration of extremist elements emanating from the Hamas-controlled enclave.

When completed, the wall will stretch for about two kilometres, and will be six meters high and five meters deep; this will also decrease the construction of cross-border tunnels dug by Gaza's militants and used to smuggle arms and people.

Egypt is not the only country to have done so. A year ago, Israel announced it would start the construction of a fence separating the country from the enclave, in addition to the barrier that has been built between 1994 to 1996.

But for Hussam Al Dagani, a Gaza-based analyst from al Umma University in the Strip, the Israeli barrier is a whole different concept.

"Egypt's wall came to protect the country's citizens and most Gazans see their activity as such. What Israel built under our nose is an apartheid wall aimed at strangling the Palestinian people," he said, referring to the blockade imposed by the Jewish state after 2007, when the Islamic group Hamas seized control over the Strip, ousting the enclave's previous government headed by President Mahmoud Abbas.

Israel, however, sees the situation in a different light. In 2001, militants linked to Hamas launched their first rockets that hit Israel's southern communities. When Hamas took power six years later, the situation rapidly deteriorated. Over the course of years, militants from the Islamic group and its allies have launched more than 20 thousands rockets into Israel.

During this time, Hamas has also stepped up its tunnel construction activity. If before 2006, the estimates were that the Islamic group possesses some 2,500 tunnels, with most  used for smuggling purposes, Hamas' takeover changed that equation.

Many tunnels started serving military purposes and the group began a project to build a maze of underground concrete bunkers featuring multiple entrances and exits underneath residential buildings.

Hamas' Ups and Downs With Cairo

Cairo has also eyed Hamas activity with concern. During the years of the late president Hosni Mubarak Egypt imposed restrictions on Gazans willing to cross the border and flooded Hamas tunnels with gas and sometimes water in a bid to destroy them.

When Mubarak stepped down, following the eruption of mass protests against him in 2011, Hamas breathed with relief. The new head of state Mohammed Morsi, a member of the Muslim Brotherhood movement of which Hamas is an integral part, vowed to improve ties with the Islamic group, sending waves of panic in Tel Aviv that started fearing Israel's peace treaty with Egypt would be in danger.

But once he was toppled in 2013, Hamas was dealt a severe blow. President Abdel Fattah Al Sisi destroyed more than 1,500 tunnels, continued the strict border-crossing policy for civilians and stepped up his army's presence in the Sinai peninsula in an attempt to prevent infiltration of militants into the Egyptian territory.

Yet, Al Dagani is certain that relations with Egypt are on the right track. "Hamas acknowledges the fact that Egypt is the most influential Arab country and it understands the motives that Egypt pursues [namely to secure its citizens]. Therefore, Hamas is willing to cooperate with Cairo to make sure nobody violates the agreements."

"Egypt too realized that Hamas is part and parcel of the Palestinian society and as such Cairo knows it needs to work with Hamas to maintain regional stability," explained the expert.

Apart from being dependent on Egypt as a connection to the outside world, Hamas also relies on Cairo for diplomatic assistance.

During Israel's operations of 2008, 2012 and 2014 it was Egypt that mediated a ceasefire between the rivals, and it is a delegation of Egyptian diplomats and security personnel that constantly defused the brewing tensions between the Jewish state and the Islamic group by holding talks with all parties to the conflict.

"Egypt has an important role for the Palestinians. By maintaining good ties with Israel, Cairo can play a pivotal part in pushing towards a Palestinian state and it needs to happen sooner rather than later."