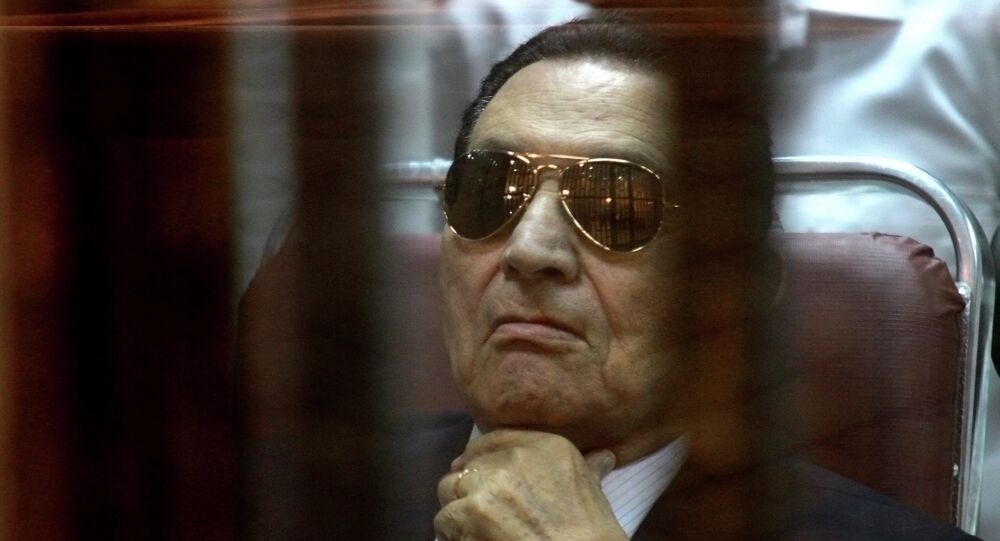 Egypt's former President Hosni Mubarak, who was toppled in the wake of the Arab Spring in 2011 and who passed away yesterday at the age of 91, will reportedly be buried shortly following afternoon prayers in Cairo.

Hosni Mubarak, the man who governed Egypt for thirty years stepped down in February 2011 following the eruption of popular protests against him with people venting their anger at the lack of economic reforms, the growing gaps between the rich and the poor, and the nepotism surrounding his rule.

"The general mood on the Egyptian street is that people won't miss Mubarak. Many forgot about him but we are all saddened by the news of him passing away. After all, he was one of the best presidents we've had", said Ahmed Gamal, a 44-year old creative designer at one of Cairo's advertising agencies.

During his tenure, Mubarak overhauled Egypt. Apart from cementing relations with the US who since 1980 has injected some $40 billion into the military and sent $30 billion in economic aid, he also introduced a number of significant economic reforms.

These included the increased role of the private sector rather than government involvement, the reduction of taxes and tariffs as well as a number of initiatives aimed at improving the country's competitiveness.

Investments in infrastructure also saw a significant boost during his time in office with the former president improving Egypt's network of roads, connecting remote towns to electricity and sewer systems, and building new neighbourhoods and towns to cater to the demands of the country's growing population.

Egypt's tourism industry blossomed too. In 2010, a year before the revolution that ousted him from office, the country made more than $12 billion in revenue, compared to subsequent years when Egypt struggled to pass the $9 billion mark.

Achievements were also registered in domestic and foreign policy. Ruling Egypt with an iron fist, Mubarak cracked down on representatives of the Muslim Brotherhood* and other Islamic groups remembering the damage they caused with the assassination of his predecessor Anwar Al Sadat.

On the international front, he managed to juggle between good relations with Israel not losing the support of other Middle Eastern and African states and even mediated between Israel and the Palestinians on a number of occasions.

The Winds of Change

But for Ahmed, as well as many other Egyptians, a change was necessary.

"His first 20 years in power were a blessing for Egypt. In the last decade of his rule, he was detached from the Egyptian people and neglected such paramount issues for ordinary citizens as education, health, and democracy. This eventually led to his fall", explained Ahmed.

In 2010, a Gallup survey found that roughly 50 percent of Egyptians were dissatisfied with their education system. Nor were they pleased with the direction their country was taking. Some 80 percent of those asked said they wanted more democracy as a key for Egypt's development.

Now, however, nine years down the line and after another revolution that ousted the Muslim Brotherhood from power, Ahmed believes Egypt has not moved an inch.

"President Abdel Fattah Al Sisi does invest in infrastructure building cities and initiating projects but we are still missing some basics - that is education and health".

The growing amount of poor people is also a major concern for Ahmed.

In 2019, one of Egypt's leading newspapers Al Masri Al Youm reported that the country's poverty rate stood at 32.5 percent, compared to 2015 when it was 27.8 percent.

"Egypt has been through a trauma and partially it was the blame of Mubarak. It will take time until we get up from our knees and restore our country", he summed up.

*Muslim Brotherhood is a terrorist organisation banned in Russia and other countries.