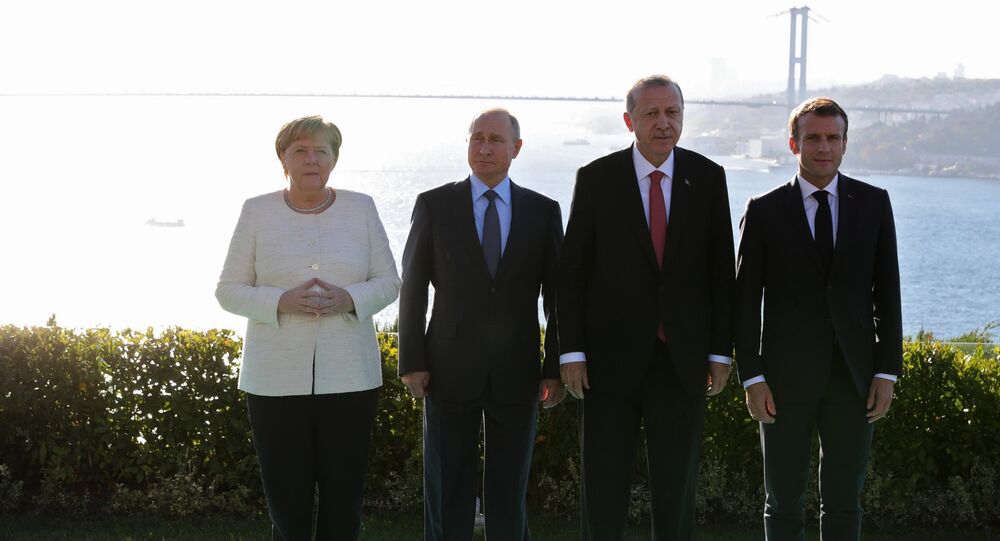 Why Merkel & Macron Likely to Support Moscow, Not Ankara at Proposed March Talks

The Turkish president signalled Tuesday that the 5 March talks with his Russian, German, and French counterparts on the Idlib crisis are still under consideration. Middle East experts Ghassan Kadi and Chris Assad have explained why there are only a few options on the table for Ankara at the potential talks.

On Monday, Russian Foreign Minister Sergei Lavrov made it clear that reaching an agreement with al-Qaeda* offshoots in Syria is unacceptable, shredding US Special Representative for Syria Engagement James Jeffrey's claim that the US does not view Hayat Tahrir al-Sham* operating in the region as really being "such a terrorist organisation".

Lavrov and Kremlin spokesperson Dmitry Peskov signalled Russia's dissatisfaction with Turkey's failure to deliver on its 2018 Sochi pledge to separate moderate militants from terrorists in the province and disarm terrorist elements who are still continuing to attack Syrians and Russian military installations.

Turkey Won't Have Many Options in March Talks

According to Ghassan Kadi, a Middle East expert, blogger, and political analyst of Syrian descent, first, no one can guarantee that the 5 March summit will come to fruition.

"Second, let us not forget that it was Erdogan’s initiative to ask Macron and Merkel for this favour, because he knows he is in trouble", the Middle East expert opines. "He will be going to the meeting as the underdog looking for a face-saving exit. He will be the beggar not the chooser. If the summit eventuates, it will most probably endorse the need for Erdogan to commit to the Sochi (and Astana) agreements without having to revisit the details".

Meanwhile, Western mainstream media is circulating the stories of Syria's "worst humanitarian crisis" engulfing Idlib, pinning the blame on Damascus and Moscow for it. For its part, the London-based Syrian Observatory for Human Rights is disseminating news about civilian casualties as the result of alleged Russian air raids on the area of Jabal al-Zawiya, which was recently proven to be false by the Russian Ministry of Defence.

Christopher Assad, a Canada-based political analyst of Syrian origin suggests that Russia will come up with a final offer on the Idlib standoff given that the Sochi and Astana agreements are not being observed in the province.

"I predict a very short summit where the Russians would establish the facts and suggest one scenario: Germany and France would convince Erdogan to withdraw all his troops from all Syrian territories, with the exception of a 16-kilometre wide strip at the Turkish border with Idlib which can be used to keep all the terror groups, regardless of their affiliations", Assad presumes.

According to the observers, Turkey may try to use the refugee card to convince Germany and France to take its side.

Presently, Ankara claims that since it already home to some 3.6 million Syrian refugees Turkey will not be able to handle the burden of a new influx of asylum seekers amid the Syrian Army's advance.

Erdogan has repeatedly played the refugee card to extract financial aid from Europe threatening to let 3 million displaced Syrians into the Old Continent that is still trying to cope with the migrant crisis dilemma.

In December 2019, Brussels announced that €6 billion in aid to Turkey had been "fully mobilised" while Ankara is now demanding more referring to hundreds of thousands of refugees who are fleeing Idlib Province.

"Of course he would use all kinds of excuses, refugees to Europe and to Turkey, humanitarian issues, loss of opportunity to share power in Syria through his moderate opposition, etc.", Assad foresees.

However, Kadi and Assad do not believe that Berlin and Paris will throw their weight behind Erdogan because of that as they have had enough of these threats. It's more likely that they would persuade him to reach a compromise with Moscow, the experts believe, especially given that neither Germany, nor France, nor the US are willing to step in if Turkey engages in a direct clash with the SAA by launching its "imminent" military operation in Idlib, previously mentioned by Erdogan.

"The bottom line is, NATO and their regional clients are fully aware of the possibility of total defeat in the eastern Mediterranean", Assad observes.

© AFP 2020 / Omar Haj Kadour
A Syrian rebel fighter remotely-fires a rocket from a truck-mounted launcher at a position in the countryside of Idlib towards regime forces positions in the southern countryside of Syria's Aleppo province on February 10, 2020.

Four-Way Summit Unlikely to be a Breakthrough

The Middle East experts are not holding their breath in anticipation of what is going to happen on 5 March: according to them what really matters is now taking place on the ground in Syria.

"After all, by that date, it is very possible that the combat situation will be much more dire for Erdogan and that he will find himself with no choice other than to comply with his commitments or face utter defeat and humiliation", Kadi suggests.

For his part, Assad expresses the firm belief that Syria "will not stop its military operation in Idlib unless Erdogan pulls out his forces immediately from the province".

"Syria has decided to liberate all of Syria, Idlib included", the political analyst highlights. "They started their liberation of Idlib and will not stop until the objective is met. There is no rational military or political reason for them to do so. The only way to defuse the crisis in Idlib is for Erdogan to accept the Russian offer. Otherwise, he will end up in deep trouble and a war".

*Hayat Tahrir-al Sham (aka al-Nusra Front), al-Qaeda are terrorist organisations banned in Russia and many other countries.