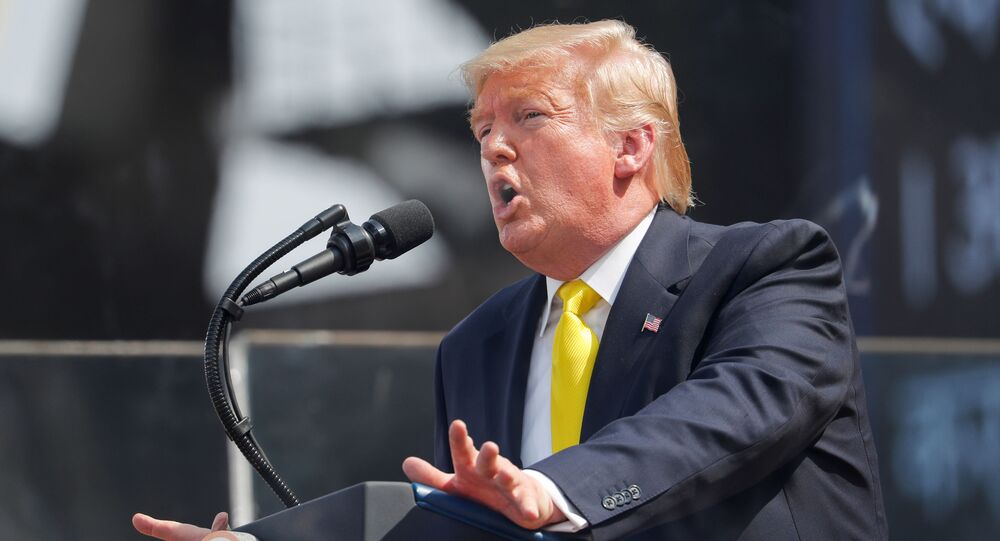 New Delhi (Sputnik): There has long been speculation that US President Donald Trump might offer to mediate between India and Pakistan. This intensified after Trump used his Ahmedabad address to suggest that New Delhi should promote peace in South Asia through dialogue with its neighbours, including Pakistan.

US President Donald Trump’s comment on Pakistan during his "Namaste Trump" speech in Ahmedabad city on Monday has raised questions as to whether he will offer to mediate between India and Pakistan when he meets Indian leaders in New Delhi on Tuesday.

Dismissing the scope of an offer on mediation, Harsh Pant, Head of the Strategic Studies Programme at Delhi-based think tank Observer Research Foundation, says: “His comments about Pakistan were more aimed at the Afghanistan problem where they need Pakistan’s help as there are reports of deal being signed between the US and the Taliban on the 29 of this month. So he wants Pakistan to be in good humour.”

Over 100,000 Indian people went silent for a moment after Trump described relations with Islamabad as “good” and he went on to describe “big progress” made by Pakistan to combat terrorism. Trump also expressed hope for a reduction in tensions, “greater stability and the future of harmony for all of the nations of South Asia”.

Noting that Trump also mentioned India and America working together on fighting Islamic extremism, Pant says that his comment was not aimed at mediation.

“I don’t think mediation is on the cards. His major priority is Afghanistan. He is in India for different reasons. He wants to go back to his base and telling them that 'look, I have withdrawn forces from Iraq and Afghanistan,' the promise that I made to you. His priority is to find way out of Afghanistan and there he needs Pakistan,” Pant says.

It was evident from the beginning that Pakistan was at the centre stage of peace talks with the Taliban, which aims to end the 20-year-old war in Afghanistan. Pakistan Foreign Minister Shah Mehmood Qureshi said on Saturday that the peace deal would be signed in the presence of Pakistan because it was quite impossible to deliver on it without Pakistan’s participation in the final agreement.

“Pakistan convinced the world to make efforts for a political solution to the Afghan problem through dialogue. It was hard to convince Taliban for the peace process, but Pakistan made them join the process,” Qureshi added.

The peace process was suspended after Donald Trump fumed over the killing of 12 people, including an American soldier, in September 2019 ahead of a crucial meeting between the US President, Taliban leaders, and Afghan President Ashraf Ghani in Camp David. Pakistan made strong efforts to release two abducted western hostages from the Taliban in November 2019 in order to resume the dialogue once again.

With India having high strategic stakes in Afghanistan including infrastructure development, the Indian side is expected to discuss the possible implications of a US-Taliban Peace Deal on its $3 billion investment in civil infrastructure.

India will be raising the Afghanistan issue with Trump and trying to understand what Trump has in mind post withdrawal of troops, what kind of posture America will have in the region, Pant said adding that there is a need to understand Trump’s assessment of regional security after the US troop withdrawal.

Commenting on relations between the Taliban and Pakistan, he said that both work in tandem in Afghanistan, which means that India will have concerns about not only its own footprints in Afghanistan but also about the future of Afghanistan itself.