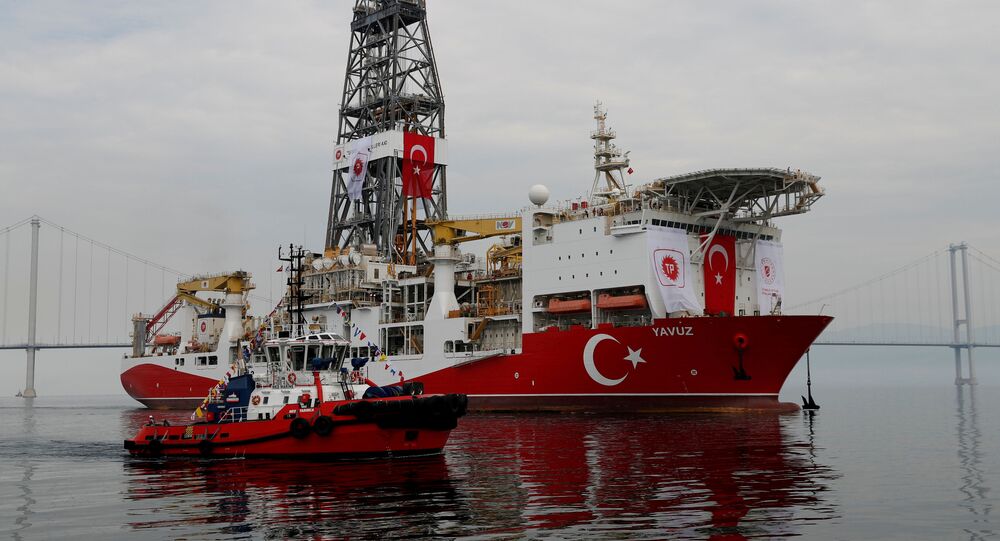 Turkey's decision kick off exploration activities in the Eastern Mediterranean under an agreement previously signed between Ankara and the UN-recognised authorities of war-torn Libya is likely to provoke an international outcry, international observers foresee, explaining Recep Erdogan's move on the eve of the Berlin conference on Libya.

On 16 January, President Recep Tayyip Erdogan announced that Turkey would start exploration activities in the Eastern Mediterranean this year citing a November 2019 deal, struck between Ankara and Fayez al-Sarraj, the head of the Government of National Accord (GNA) in Libya, which delineated maritime borders laying claims of sovereignty over the areas in the energy-rich eastern part of the sea.

"We will start search and drilling activities as soon as possible in 2020 after issuing licenses for the areas", the Turkish president said during a two-hour speech in Ankara, adding that the vessel Oruc Reis would soon begin offshore seismic exploration in the region.

The Eastern Mediterranean has been one of the world's most perspective regions for hydrocarbon discovery over the last ten years. The Leviathan gas field was explored in 2010 off the coast of Israel and the Zohr deposit was found in 2015 off the Egyptian coast.

Erdogan's move contradicts a plan by Greece, Cyprus, and Israel to construct the Eastern Mediterranean (EastMed) pipeline to deliver natural gas to Europe. As the Turkish president outlined Thursday, from now on it will not be "legally possible" to conduct exploration activities or lay pipelines in areas between Turkey and Libya without both countries' approval.

Dr Cyril Widdershoven, a veteran global energy market expert, suggests that by striking the delineation deal with Sarraj Erdogan is seeking, first, to break up any possible cooperation between Greece, Cyprus, Israel, and Egypt in the Eastern Mediterranean; second, to increase pressure on Athens and Nicosia; third, to block any in-depth offshore energy exploration in the region; and, fourth, to get back some of the outstanding multibillion dollar Libyan debt to Turkish companies, who have not been paid since the collapse of Libya into failed statehood in the wake of the 2011 revolt and killing of Muammar Gaddafi.

Widdershoven does not rule out that, in addition, Ankara "wants to grab a part of the oil and gas wealth that Libya holds", opening up more hydrocarbon exports to Turkey.

Dr Thomas O’Donnell, analyst and consultant on the global energy system, offers an explanation about what is behind Turkey's active pursuit of hydrocarbon resources. According to him, Ankara "fears" to become "overdependent" on energy supplies from Russia – via TurkStream – and Iran.

"From the energy point of view Turkey has a problem in the domestic market and natural gas", he notes.

Apparently therefore, Ankara has moved "very aggressively" to claim offshore gas deposits located between Turkey and Cyprus and struck the recent maritime agreement with the UN-recognised government in Tripoli, the analyst believes.

He agrees with Widdershoven, that at the same time, the Turkish leadership is seemingly trying "to block the ability of Cyprus and Israel and Egypt to market gas".

According to O’Donnell, the US, EU, and many other countries do not recognise Ankara's drilling rights off Cyprus' northern coast under an agreement with the de facto Turkish Republic of Northern Cyprus, nor will the powers accept the maritime lines between Turkey and Libya's exclusive economic zones recently drawn by Ankara and the GNA, which de facto controls just 10 percent of the country.

"It’ll become almost impossible to market that gas [for Turkey]. The only thing they could do is bring it back home", he says.

Yannis Koutsomitis, a political and economic analyst from Belgium, echoes the observers by suggesting that "it is obvious that Erdogan aims to exploit Turkey's leading position over Libya's Government of National Accord and collect the spoils of war", most notably, the Eastern Mediterranean's vast natural resources.

"It is highly likely that Egypt, the UAE, and possibly Greece, France and Italy too, will object to Turkey's highly questionable plans", Koutsomitis envisages.

Erdogan's 16 January statements with regard to Turkey's upcoming seismic activities in the Eastern Mediterranean came ahead of a key conference in Berlin concerning the establishment of a truce between the Government of National Accord (GNA) and the Libyan National Army (LNA).

The upcoming gathering was preceded by a Moscow summit between the GNA and LNA leaders, brokered by Russia and Turkey that ended with LNA Commander Khalifa Haftar taking a pause to further consider the ceasefire agreement.

On Friday, a diplomatic source signalled that Haftar may sign a deal with Sarraj during the 19 January Berlin summit. For his part, the Turkish president told reporters the same day that the LNA commander was "unreliable" arguing that the latter has continued to bomb Tripoli.

According to Koutsomitis, the Berlin conference could fall short of expectations if it does not deal with the current developments in the region as well as energy issues concerning the Mediterranean regional powers and global players.

"[German Chancellor Angela] Merkel says that the Berlin conference will only be about a permanent ceasefire and not be about Libya's sea zone but I'm afraid that peace is not achievable in Libya unless there is an international agreement on how to treat the country's vast oil reserves and offshore hydrocarbon potential", the Belgian political analyst concludes.

‘Playing the Libya Card’: Turkey’s Erdogan Gambles on Foreign Adventure to ‘Save His Rule’