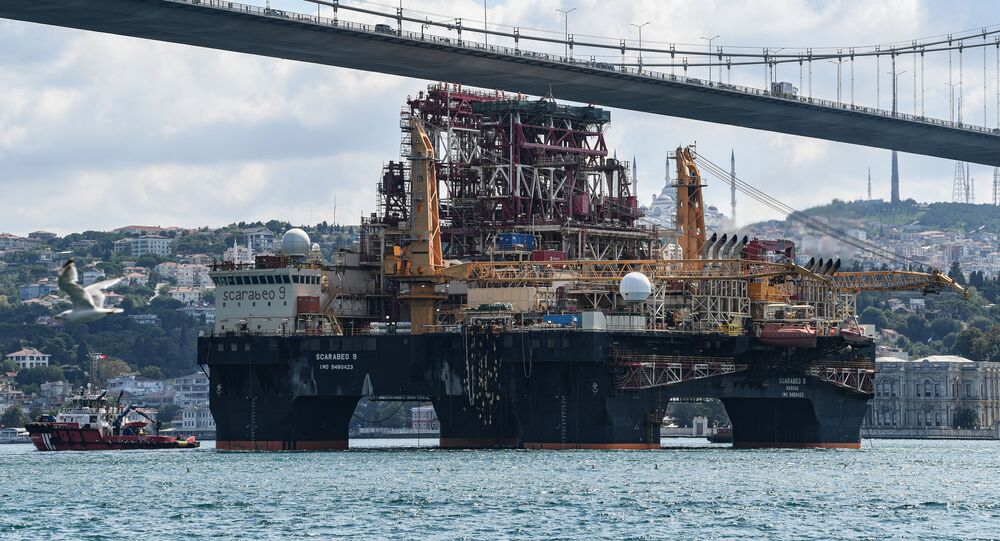 MOSCOW (Sputnik) - Turkey on Wednesday unveiled plans to conduct further oil and gas exploration in the eastern Mediterranean Sea, after signing a memorandum of understanding with Libya’s UN-backed Government of National Accord (GNA) last week, just days after the Greek Prime Minister condemned gas drilling off the coast of Cyprus.

"As with other areas, the companies that we will grant licenses to will start oil and gas exploration and production studies in maritime jurisdictions within the scope of this agreement," Fatih Donmez, Turkish energy and natural resources minister stated, as quoted by the Anadolu news agency.

Donmez recalled that Turkey has already conducted drilling at four sites off the coast of Cyprus, and a fifth site is currently being explored. Turkey stresses that all agreements concerning hydrocarbon drilling in the Mediterranean correspond with UN laws.

On 27 November, Turkey and the GNA signed two agreements, one of which determines a portion of Turkey’s maritime jurisdiction in the eastern Mediterranean. The new maritime border established by the agreement runs through a zone in the Mediterranean that Greece and Cyprus claim as theirs.

On Monday, Greek Prime Minister Kyriakos Mitsotakis condemned Turkish hydrocarbon drilling off the coast of Cyprus, arguing that it undermined European Union efforts to embrace renewable energy sources. Greek Foreign Minister Nikos Dendias announced on Tuesday that the Greek prime minister will have talks with Turkish President Recep Tayyip Erdogan at the ongoing NATO summit in London regarding these disagreements.

Egypt, Cyprus and Greece have urged Turkey to abandon explanatory gas drilling off the Cyprus coast after Ankara announced it had sent the Yavuz drillship to an area where Greek Cypriot authorities had already awarded exploration rights to European companies. Turkish President Recep Tayyip Erdogan has vowed to continue drilling off the coast of Cyprus.