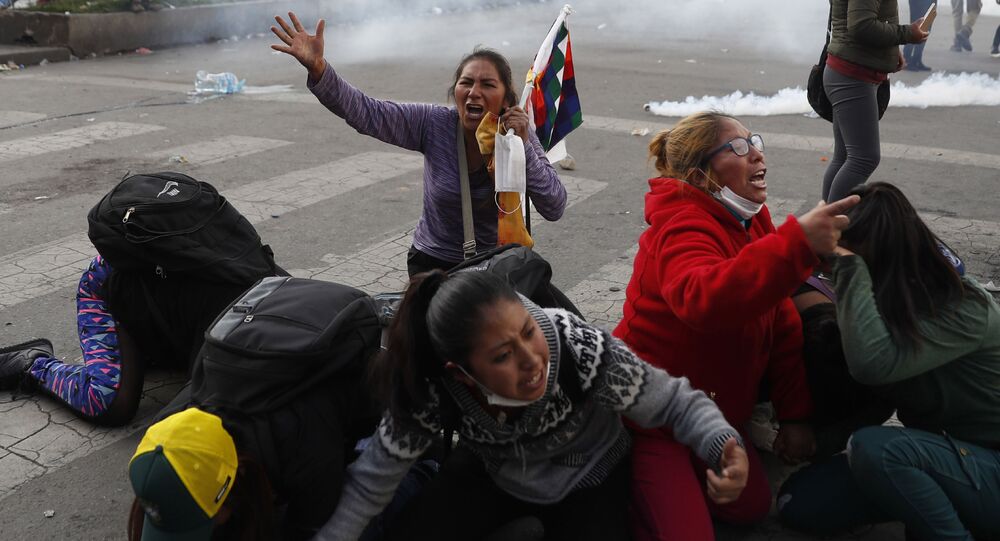 Violence and political chaos in Bolivia continued Tuesday, when six people were killed after the Bolivian military opened fire on unarmed civilians who were blocking a gasoline plant in the city of El Alto. Meanwhile, supporters of former Bolivian President Evo Morales demand the resignation of self-proclaimed interim President Jeanine Añez.

The violence inflicted on civilians by the Bolivian armed forces is the expected aftermath of a military coup, Ben Norton, a journalist with The Grayzone and co-host of the Moderate Rebels podcast, told Radio Sputnik’s Loud and Clear hosts John Kiriakou and Brian Becker.

“Because simply, it is a junta that is holding up the elite rule of a small percentage of the population of these rich, right-wing elites and trying to repress the vast majority of the population, which is the poor, working-class indigenous majority who now knows what life can be like if they actually have a government that represents them and acts in their interest and uses the plentiful natural resources of Bolivia to fund social programs, to combat poverty, to fund education and health care,” Norton said. “So, people are in the streets to fight to defend that, and the response has been absolutely brutal.”

“We need to keep in mind that not only is it this specific massacre - there have been other massacres - but this a policy being directed from the top intentionally by the so-called interim president,” Norton explained.

Last Friday, five supporters of Morales were massacred in bloody clashes with local police in the central Bolivian department of Cochabamba, AFP reported.

“And specifically, Añez a few days ago signed a directive, an executive order exempting all soldiers and police forces from the legal repercussions of whatever crimes they commit in order to so-called ‘restore order,’ is the language of the executive order. So, essentially, this is a license to kill. This is carte blanche for the security forces to essentially kill whoever they want, to massacre protesters without any fear of legal punishment by the so-called government, which at this point is simply the military junta,” Norton said.

“This is such an extreme move that even many of the supporters of the coup have actually now been criticizing the military junta, which yet again is another example of why you should be opposed to military coups,” he continued.

“A lot of these figures, including some liberal democrats who supported the coup at first, are now rightfully criticizing it. But it's too late, because they helped actually support the coup in the first place. What we’re seeing is not new in Latin America. There is a long history of these kinds of US-backed, elite, right-wing military juntas,” Norton explained.

Morales is currently in Mexico, where he has been granted asylum due to concerns for his safety. He has accused opposition leaders Carlos Mesa and Luis Fernando Camacho of orchestrating a coup against his leadership after they claimed there were irregularities in the October 20 presidential election, which Morales won by more than the margin that requires a runoff. The Organization of American States (OAS) contributed to the military coup by calling for a transparent vote count and a second round of presidential elections following the Movement for Socialism leader’s win.

According to Norton, the election irregularity storyline has gained traction in the corporate media, despite being based on falsities.

“There are vague and ambiguous accusations of irregularities, and then eventually, those unverified accusations spiral, and they become, over time - much as if you play the telephone game as a kid - they become much larger accusations and much more serious accusations of rigging. And this goes back to the Organization of American States (OAS), which throughout process totally discredited itself. And I will say the OAS is not an organization that is looked upon highly in Latin America,” he noted.

“The US funds 60% of its budget; the US helped create the OAS during the Cold War as the coalition of anti-communist countries, but in this coup in Bolivia, the OAS has just destroyed its credibility beyond recognition, specifically by helping to play a leading role in the coup by spreading these acusations without any evidence that supposedly the government of Evo Morales stole the election in fraud,” Norton explained.

However, despite Latin America’s history of military juntas taking power, Norton believes that “dictatorial regimes” like the one currently controlling Bolivia won’t last long, as people continue to rise against such authoritarianism.

“The US role in Latin America for many decades has been to prevent democracy, because they know that when the majority of working class and poor indigenous people can vote, they are going to vote for someone who is going to take away the undeserved wealth of rich elites and use it to benefit the full population. Right now the biggest obstacle is absolutely the US government and the Trump administration and these right-wing elites and the right-wing elites of Colombia and Brazil, who are all extremely authoritarian and not fully committed to democracy,” he continued.

“We are seeing the people rising up. I think that eventually these kinds of elite, military junta, dictatorial regimes are going to fall, because simply the math of the population shows that they don’t have the popular support they need to sustain themselves.”