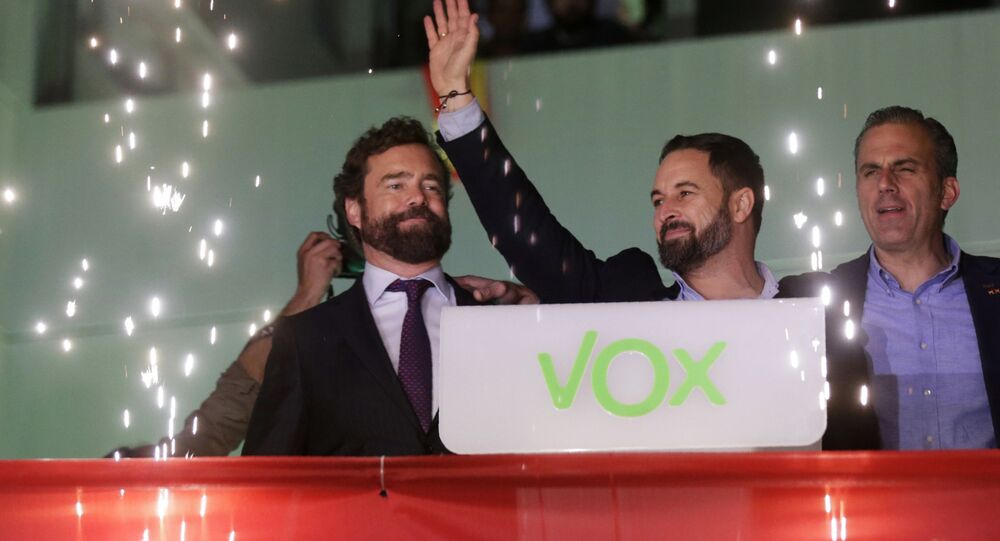 MOSCOW (Sputnik) - With Spain's Vox party storming into the top parliamentary triad following the snap election in the country, it is all about winning now, no matter what further course of action the frontrunners, the Socialist Workers' Party (PSOE) and main opposition People's Party (PP), choose to follow, Vox spokesperson Alonso de Mendoza said.

"Whatever Pedro Sanchez now does, it will reinforce Vox, no question about that," de Mendoza said.

He further outlined the three most probable scenarios of how things might proceed.

"The first option of Pedro Sanchez is to try to form a coalition on the Left, but the PSOE and Podemos have lost seats, and they absolutely need the support of the Catalan separatists. So if they negotiate with the Catalans, this will reinforce Vox very much, because we absolutely refuse any concession to the separatists," the Vox spokesperson said.

Another option is for Sanchez to call for another snap vote, but that would be unacceptable for the people and only enhance Vox's reputation, de Mendoza opined.

"The third option for Pedro Sanchez – and he will be put under pressure by the establishment to choose that exit door – is to try and create a grand coalition with the PP But for the PP of Pablo Casado, this would be the kiss of death. It would mean that Vox will be the only party on the right which is in the opposition. We are clear on all main issues that Spain is faced with, and the PP would only lose to Vox at the coming elections," he said.

© CC BY-SA 3.0 / Esetena / Palace of Senate of Spain. Madrid. Spain
Snap Parliamentary Election Takes Place in Spain on Sunday
Of the Spanish Congress' 350 seats, the PSOE has claimed 120 — down by 3 — followed by the PP with 88 seats — up by 28 — and Vox with 52 seats — up by 28. The first two are traditional rivals but can theoretically accept a coalition and make it beyond the 176-seat threshold for forming a majority government.

"So Vox can not participate to a government this time, but we are comfortably ‘at the balcony’ and will be firm in our democratic opposition," Mendoza concluded.

On Sunday, Spain held a snap general vote in a bid to end the political stalemate that the government has been in since the previous vote in April. The results suggest that uncertainty might repeat itself, as the PSOE once again won the vote but fell short of an outright majority.