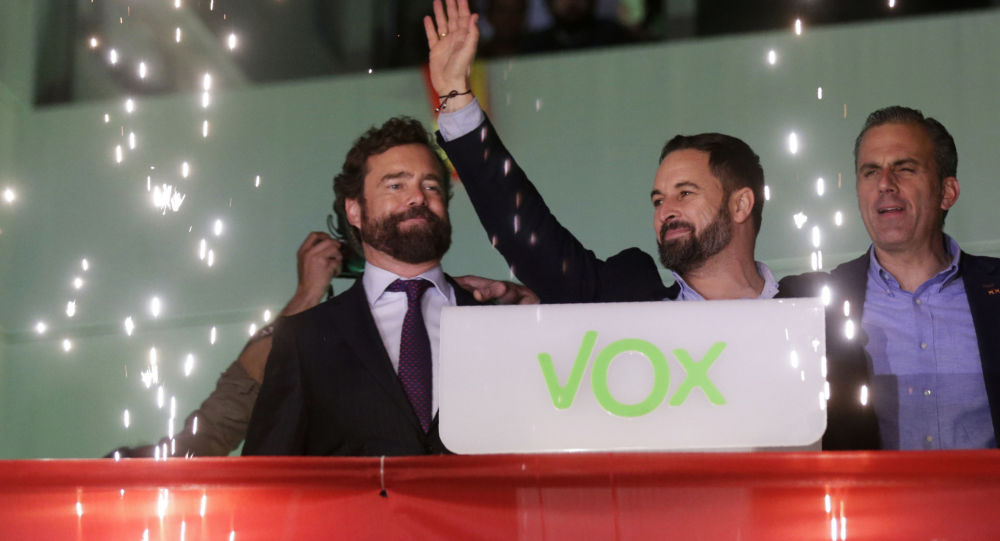 The elections on 10 November in Spain revealed two major developments in the balance of political forces within the country: the success of VOX and the failure of Ciudadanos, Carlos Fernández Esquer, professor of Political Science at the Autonomous University of Madrid, says.

According to Carlos Fernández Esquer, the success of VOX (Voice) is that the political party has received 52 seats and gained 15% of the votes.

The professor of political science believes that this success was due to several factors; the main one was largely related to the crisis in Catalonia, which continues to polarise Spanish society.

Another factor that has affected the election results could be the electorate’s fatigue with Ciudadanos (Citiizens Party), Esquer explains. This party has lost many seats, gaining less than 7% of the votes and only 10 seats in Congress.

“This failure is quite striking because until recently this party was the third political force and could reach an agreement with the PSOE (Spanish Socialist Workers Party), which Ciudadanos has rejected, and they are now paying for the consequences of the re-election,” he says, stressing that Ciudadanos and their leader Albert Rivera have suffered “a total failure.”

Esquer had to look a long way back to find a similar electoral failure. The last time it happened was back in 1982 with the UCD (Union of Democratic Center).

“Since then, I believe, there has been no party that has lost so many votes. It should be borne in mind that in the April elections, Ciudadanos gained just over 4 million votes and their number dropped to a little more than 1.5 million. That is, the party lost 2.5 million voters in just 6 months, which is simply unbelievable,” Esquer calculated.

What alliances should be forged to form a government?

Esquer believes that the problem related to government formation is very complex, “even devilish.”

Right now there are at least three options. The first is that the left bloc will try to once again reach an agreement, which is supported by the independence parties, such as the Esquerra Republicana (Left Republicans of Catalonia). Doing this now would be very complicated because of how the Catalan conflict is progressing, the professor says.

“Another unprecedented option for Spain could be a large coalition between the PSOE and the People’s Party; but we have no prerequisites for this. Say, this is the only clear majority that would give an absolute majority to be able to rule the country during the legislature and approve the budget,” Esquer said.

The third option is a minority government of the PSOE (Spanish Socialist Workers’ Party), from which some right-wing parties, such as Partido Popular (People's Party), Ciudadanos and others, abstained in a technical way to enable the inauguration and the start of the new government.

“But these are all very complicated scenarios, and without them it is quite possible that a third election of the year will be convened,” he said.

However, the situation may improve if the parties decide to change their attitude, and instead of looking at competition, they seek more collaboration and cooperation.

“If they don’t change their attitude, the situation will obviously become more complicated than after the April elections,” Esquer concluded.