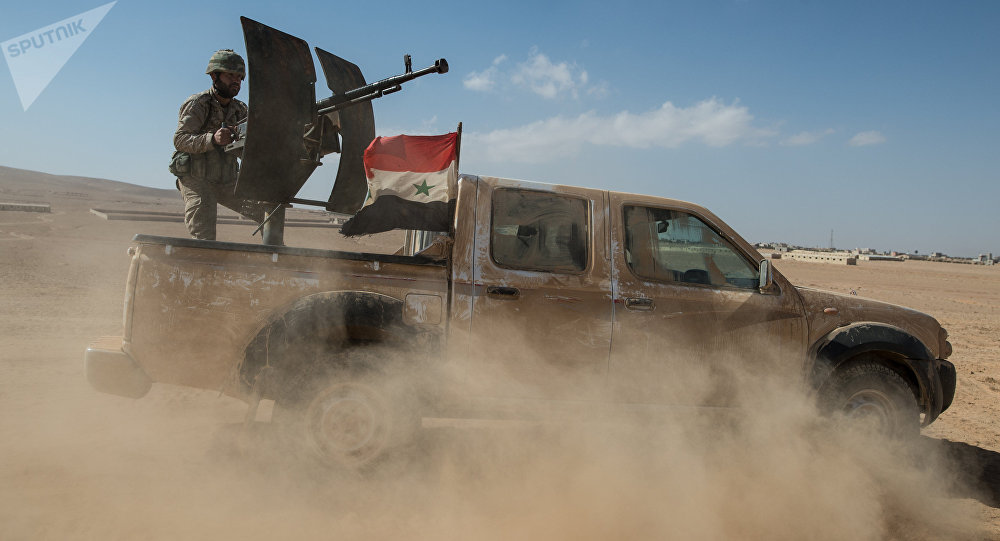 According to various reports, Kurdish forces have been withdrawing from the 120-kilometre (75 miles) wide and 30-kilometre (20 miles) deep Turkey-proposed "safe zone" in north-eastern Syria. However, the situation on the ground is changing rapidly, international observers say, describing scenarios of further developments in the region.

On 17 October, Turkey and the US struck an agreement on a five-day truce in north-eastern Syria amid Ankara's Operation Peace Spring, launched earlier in the month in a bid to expel the Kurdish-dominated Syrian Democratic Forces (SDF) and Daesh* remnants from the region. The People's Protection Units (YPG) – the backbone of the SDF – is viewed by Ankara as an affiliate of the Kurdistan Workers' Party (PKK), designated as a terrorist organisation in Turkey.

Having found themselves in dire straits, the SDF reached an agreement with the Syrian Arab Army (SAA) in mid-October seeking to resist Turkey's advance. In just a few days, the SAA has made considerable progress: Syrian government forces have reportedly deployed to Tabqa, Raqqa, and Kobane, previously controlled by the US-backed SDF. News emerged on Sunday that the SAA had surrounded Turkish troops in the Syrian border town of Ras al-Ain.

As for Manbij and Ain al-Arab, their fate is due to be discussed during the upcoming Sochi talks in Russia, as Turkish Minister of Foreign Affairs Mevlut Cavusoglu outlined in an interview with Kanal 7 on 20 October.

Meanwhile, the US is withdrawing all of its nearly 1,000 troops from northern Syria, with hundreds of trucks having crossed the border of western Iraq on Monday.

Given the rapidly changing geopolitical environment in the region, the question arises as to how the situation will unfold in the near future and whether it will morph into a larger conflict involving the Turkish-led forces and the SAA.

Philip Giraldi, a former CIA counter-terrorism specialist and military intelligence officer, believes that an escalation of the conflict into a regional war is unlikely.

"If it were to come to an actual war, Turkey is much more powerful than Syria", the CIA veteran emphasises. "But it will not come to that. Turkey sees a vital national interest in establishing a safe or neutral zone along the Syrian border due to the threats from the several Kurdish groups. It will do just that using proxies or its own soldiers if necessary".

According to Giraldi, Damascus "will have to put up with it", but obviously "some formula with Ankara will likely be worked out".

He highlights that while Erdogan definitely has popular support at home for establishing a safe zone, the population of Turkey "is strongly opposed to anything more aggressive vis-à-vis Syria".

"Bear in mind that Erdogan's position is weak due to his recent major defeat in local elections, so he will have to be careful in how he proceeds to protect his own voter base", the former CIA field officer stresses. 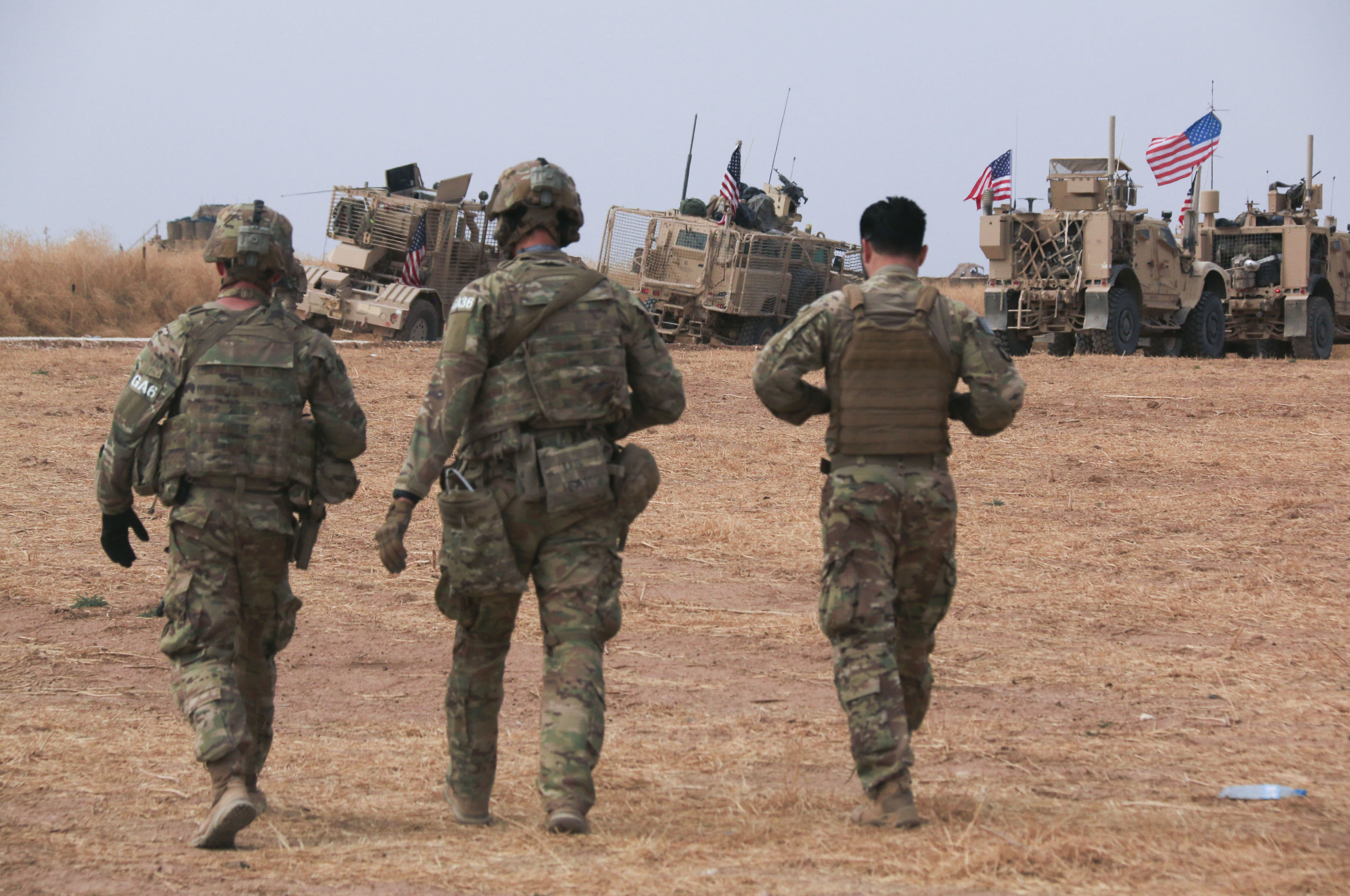 Mark Sleboda, a US military veteran and international affairs and security analyst, points out that the upcoming meeting in Sochi between Presidents Erdogan and Putin on 22 October "will be crucial as the two countries negotiate the future of post-American occupation North East Syria [NES]".

The security analyst noted that Turkey and the Russian-backed Syrian government are now in a race and war of manoeuvre to maintain control over the territory, resources, and strategic space that the US is withdrawing from.

According to him, the ongoing truce "is really just an opportunity for both sides to consolidate their position and gains and negotiate the way forward".

"The US no longer controls NES and has little leverage left to determine its future", he notes, stressing, however, that the US is planning to leave 200 Special Ops servicemen to keep control of Syria's oil fields, as well as the Al Tanf base in the south. "Their position is weakened, but they aren't completely out of the game yet".

Sleboda does not rule out that the forthcoming negotiations between Moscow and Ankara may result, at least for the short term, in yet "another frozen conflict and the de facto partition of significant portions of northern Syria into a Sunni Islamist protectorate of Turkey" with millions of Sunni Arab Syrian refugees and foreign proxy fighters being relocated there.

The security analyst notes that the Turkey-backed Syrian National Army is "a consolidation and rebranding of the majority of the various sectarian Islamist and jihadist militias" previously pushing for regime change in Syria over the course of the Syrian conflict since 2011.

In October 2019, the Turkish think-tank SETA presented a graph naming the militias that jointed the Turkish-backed Syrian National Army. According to the think-tank, out of the 28 factions comprising the SNA, 21 were previously supported by the US, with three of them being trained and funded by the Pentagon and 18 by the CIA via a joint US-Turkish intelligence operation to support the armed opposition. Being led by Salim Idriss, the "defence minister" of the Turkish-backed "interim government", the SNA positions itself as heirs to the US-backed uprising against Damascus and Syrian President Bashar al-Assad.

"This proxy 'Syrian National Army' is sectarian and dedicated to the overthrow of the Syrian government in Damascus and forming a Sunni Islamist regime, another form of the Islamic Caliphate, in Syria", Sleboda suggests.

If Turkey succeeds in carving out a considerable part of north-eastern Syria under the pretext of a "safe zone", it is difficult to see how the Syrian government in Damascus could successfully negotiate with the Wahhabist/Islamist motivated Turkish-backed military proxies there and integrate them in a future government, the security analyst foresees.

© REUTERS / Stoyan Nenov
Turkey-backed Syrian rebel fighters return from the Syrian border town of Tal Abyad, as they are pictured on the Turkish-Syrian border in Akcakale, Turkey, October 19, 2019.

'All of North East Syria Will Come Under Control of Damascus'

Christopher Assad, a Canada-based political analyst of Syrian descent, holds an opposite stance with regard to the future of the troublesome region.

"All of NES [North East Syria] will come under Syrian government control relatively soon because Syria and Russia will assure Turkey of their commitment to secure the border", he says. "This would occur within the framework of an agreement that would also exclude the Turkish plan to implement a refugees' resettlement zone".

As for the military balance of power, Assad insists that "the pendulum has certainly moved in favour of the SAA/YPG forces who are deployed all over the region now".

"Turkey will not risk any further confrontations with a determined SAA and a well-armed YPG", he opines.

According to the political analyst, the US and Daesh remnants "will probably regroup in a last ditch effort to scuttle any rapprochement between the YPG and the SAA on one hand and between Syria, Turkey, Iran and Russia on the other".

Although the US decision to withdraw from Syria seems to be final, it can still try to affect the outcome of the final political settlement of the war in Syria, according to Assad.

Having started Operation Peace Spring on 9 October, the Turkish Armed Forces (TAF) and the Syrian National Army (SNA) have outgunned the Kurds. According to some estimates, around 440 Kurdish fighters were killed, while 26 were captured and 24 others surrendered just in the first days of the operation. The Turkish campaign has also resulted in 190,000 displaced people, as well as in civilian casualties. In addition, at least 750 Daesh-linked suspects escaped the Ain Issa detention camp amid the Turkish-led military operation, according to the Kurdish-led self-proclaimed administration of the region.