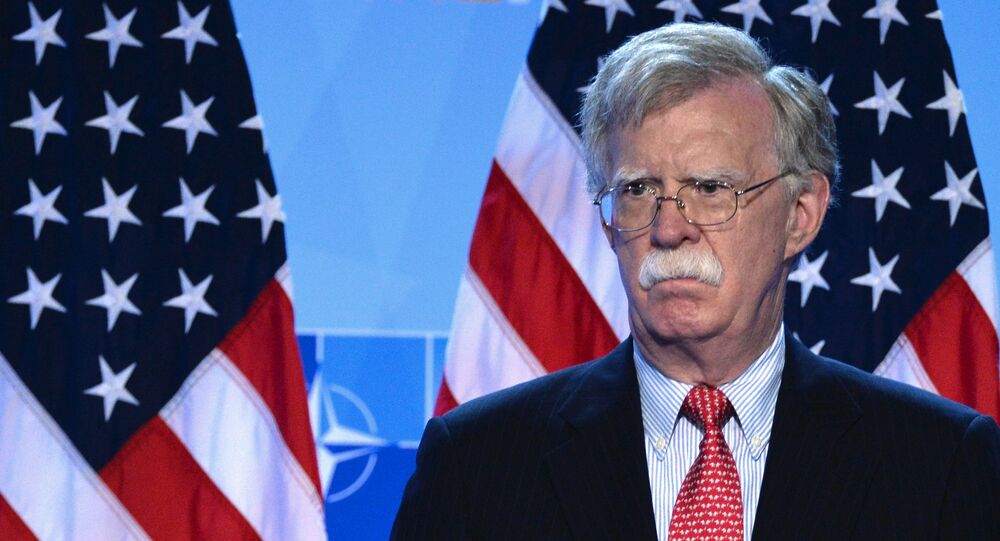 On 10 September, National Security Adviser John Bolton was abruptly sacked by President Donald Trump. American political scientists have said that their surprise is that it did not come sooner, going on to explain how US foreign strategy could change after Bolton's departure.

Bolton's ouster came on the heels of Trump's cancelled meetings with the Taliban and, separately, Afghan President Ashraf Ghani concerning a potential peace deal and US pull-out from the region.

"I disagreed strongly with many of his suggestions, as did others in the Administration, and therefore I asked John for his resignation, which was given to me this morning", the US president tweeted on Tuesday, thanking the ex-national security adviser for his service.

According to The Washington Post, ominous clouds began to gather on the ex-national security adviser's horizon much earlier. In August, Bolton, an ardent proponent of US military intervention, was absent from key National Security Council briefings on an Afghan peace agreement aimed at ending the 18-year-long war.

Fox News cited yet another White House source also claiming that "many of Bolton’s policy priorities did not align with POTUS".

Trump and Bolton: Isolationist vs Interventionist

American political scientists have shared their versions of the inner struggle in the White House, stressing that Trump's move caught no-one by surprise.

"The main reason for Bolton’s resignation is the irreconcilable differences with Pompeo", Dr Gal Luft, co-director of the US-based Institute for the Analysis of Global Security (IAGS) suggests. "The two men’s styles and opinions did not correspond on most issues and in the absence of a strong secretary of defence to balance things, the tension blew over in the aftermath of the Taliban meeting debacle".

The think tank co-director highlights that Bolton was "an odd choice for a president who [has been] governed by non-interventionist instincts" since day one.

"It was inevitable that Bolton's views would come into conflict with those of President Trump", he says. "Frankly, I'm surprised that Bolton lasted this long".

According to the professor, Trump's determination to withdraw from Afghanistan and the Middle East, negotiations with North Korea, and the president's decision to not retaliate against Iran when it shot down a US drone over the Persian Gulf were in direct contradiction to Bolton's hard-line foreign policy stance.

"The 'straw that broke the camel's back' was probably the president's invitation to meet with the Taliban at Camp David", Franklin presumes. "For Bolton, whether or not the meeting took place that was too much".

For his part, David Schultz, a political science professor at Hamline University, believes that Bolton's problem was two-fold: first, "he had very strong opinions and he was not afraid to share them, even with the president"; second, "the Trump administration’s foreign policy team has already changed several times in less than three years" which reflects the president's "own lack of a worldview or consistent way to think about foreign policy".

"National Security Adviser John Bolton’s resignation/dismissal is the latest illustration of President Trump’s tumultuous relationship with top White House staff", presumes Meena Bose, political science professor and director of Hofstra University’s Kalikow Centre for the Study of the American Presidency. "A combination of policy differences and personality conflicts likely led to the departure, and the next person to hold the office will need to address both".

Now, that Bolton is out, the question arises as to how his dismissal may affect the Trump administration's foreign strategy.

·         First, it "increases the chance for a trade deal with China, including some accommodations on Huawei".

·         Second, it "eliminates areas of tensions in the Sino-US relations", especially when it comes to Taiwan.

·         Third, it "increases the chance of Trump pushing for a meeting with Iran’s president at the UN later this month", the scholar suggests.

He opines that as the 2020 election is nearing, "Trump needs to pull an ace out of his shrinking deck, a sudden and game-changing act that would redefine his legacy and enhance his popularity while retaining the support of his base".

According to the think-tank co-director, one may expect "a Trump-Rouhani handshake in the coming weeks"; "a deepening of the dialogue with Russia"; and an eventual pull-out from Afghanistan.

David Schultz holds an opposite stance: "Look for little change in the Trump administration’s post-Bolton foreign policy", he predicts.

He notes, however, that having "a total free hand" now, Trump is likely to be "even less inhibited in seeking talks with Iran and North Korea without preconditions", something that Bolton vehemently opposed.

Nevertheless, further engagement with Tehran, Beijing, and Pyongyang does not seem to be "a piece of cake" for the US administration.

Two days before Bolton was fired, Secretary of State Mike Pompeo signalled that Washington hopes to return to denuclearisation talks with North Korea. However, on Tuesday, Pyongyang reportedly fired at least two unidentified projectiles towards the sea, just hours after offering to resume negotiations with Washington.

Earlier, during the August G7 meeting in Biarritz, Trump did not rule out a meeting with his Iranian counterpart Hassan Rouhani. Still, Tehran stands by its demand that restrictions be lifted before any negotiations.

As for China, Washington and Beijing have entered yet another phase of tit-for-tat trade restrictions that started on 1 September.

Who Will Fill Bolton's Shoes?

Bolton's dismissal has also prompted a lot speculation as to who will fill his shoes while the country is bracing for the 2020 presidential election.

"It won’t be easy to recruit a replacement for Bolton because the White House is now viewed as a place where no one can survive for long", says Dr Gal Luft, placing his bet on Assistant to the Chairman of the Joint Chiefs of Staff Major General Rick Waddell and United States Special Representative for North Korea Stephen Biegun as potential successors to John Bolton.

For his part, David Schultz presumes that "any replacement for Bolton will have to be someone who gets along with Pompeo". According to political scientist Brian Hook, Pompeo’s advisor "might be a leading candidate".

According to Dr Thomas Whalen, there is "strong speculation" that Rob Blair, an aide to White House Chief of Staff Mick Mulvaney, "will get the nod".

Trump's Third National Security Adviser Bites the Dust: Bolton Is Out, What's Next?