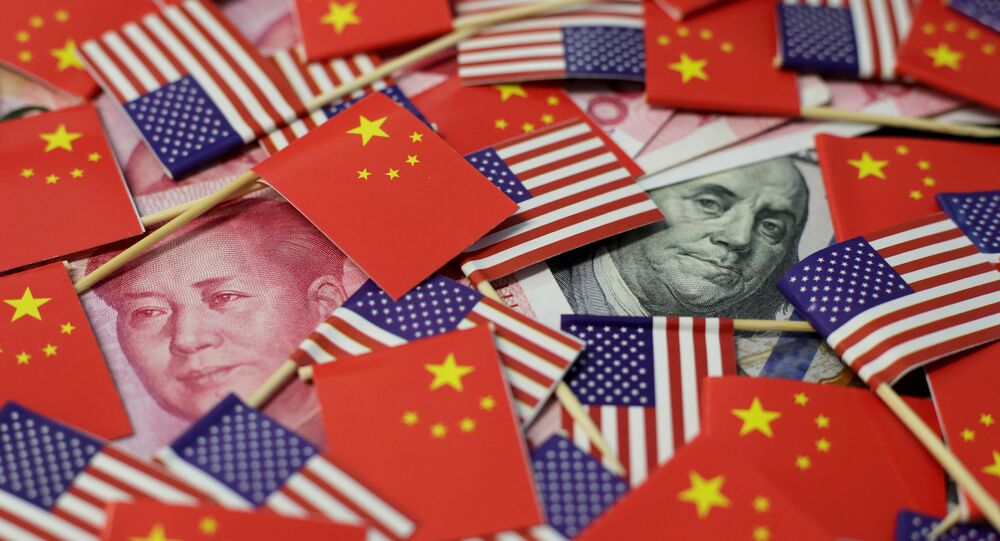 MOSCOW (Sputnik) - When new tariffs of 15 percent on Chinese goods worth $300 billion take effect on September 1, the total value Chinese goods facing harsh import duties when entering the US market would reach $550 billion, covering almost all of Chinese exports to the United States in 2018.

US President Donald Trump announced in a post on Twitter on August 24 that he planned to raise tariffs on Chinese goods amid stalled bilateral trade negotiations.

Following Trump’s instructions, the Office of the Unites States Trade Representative (USTR) issued a notice on August 28 detailing the plans to raise tariffs on $300 billion worth of Chinese goods from 10 percent to 15 percent.

Figures from the USTR showed that Chinese exports to the United States stood at $557.9 billion in 2018.

Trump’s decision to raise tariffs rate on Chinese goods came after China announced retaliatory tariffs on US goods valued at $75 billion on August 23.

According to the statement released by the Customs Tariff Commission of the State Council, China plans to charge 10 percent and five percent import duties on $75 billion worth of US goods by September 1 and December 15, respectively, matching the scheduled new tariffs announced by the USTR.

"China should not have put new Tariffs on 75 BILLION DOLLARS of United States product (politically motivated!)," Trump complained in a series of posts on Twitter on August 24, when announcing the retaliatory plan of tariffs hike.

As trade negotiators from both countries continued to engage in face-to-face negotiations, both sides looked to be unwilling to make significant concessions that could lead to an agreement to resolve the trade frictions.

During the most recent two-day trade talks in Shanghai in late July, both sides only agreed to meet again in September in the United States without making substantial progress.

Despite slowing domestic economic growth amid pressure from steep US tariffs, Chinese leaders are unlikely to offer more concessions before Trump completes his first term in office, political analysts suggested.

"The Chinese leaders are indeed facing enormous pressure [from US tariffs]. But after careful calculation, I believe they would prefer to hold onto their current stance before it becomes clear that Trump would win the re-election in 2020. This is just my personal analysis. But I think the Chinese leaders would rather procrastinate than making big concessions today. Beijing may believe it’s not the right time yet to meet certain demands from the United States. If Trump actually wins the re-election, China would probably not want to wait any longer [before making a decision on concessions]," Ding Xueliang, director of the Institute for China's Overseas Interests, Shenzhen University, said.

According to data from China’s National Bureau of Statistics (NBS), the country’s GDP only grew by 6.2 percent year-on-year in the second quarter, the slowest pace in at least 27 years since quarterly economic data became available in 1992.

Other Chinese economists pointed out that Chinese leaders appeared to be ready to embrace the negative impact of new US tariffs.

"The Politburo meeting [on China’s economy] concluded on the same day when US trade negotiators just arrived in Shanghai. This shows China will do, what the officials often describe as, ‘what needs to be done’ regardless the results of the trade negotiations. It’s obvious that the new economic policies or the decision-making process are not responding to the trade talks. Even the negotiations deteriorates further or the United States introduces new steep tariffs, the new economic policies from the Politburo meeting could continue to be beneficial to domestic economic growth in the long term," Shen Xinfeng, chief analyst of macroeconomics at Northeast Securities, said.

During a regular press briefing on Thursday, Chinese Commerce Ministry Spokesman Gao Feng stressed the negative impact of the escalating trade war on the global economy.

"China has sufficient retaliatory measures. But under the current circumstances, we believe we should discuss how to remove the tariffs on $550 billion worth of Chinese goods to avoid the trade war from escalating further. China is in serious discussion with the United States on this issue. Just like China has stressed repeatedly, the escalating trade war is harmful for China, harmful for the United States and harmful for the interests of all the people in the world, which could even bring disastrous results to the world," he said.

Gao added that trade negotiators from both countries have maintained effective communication.