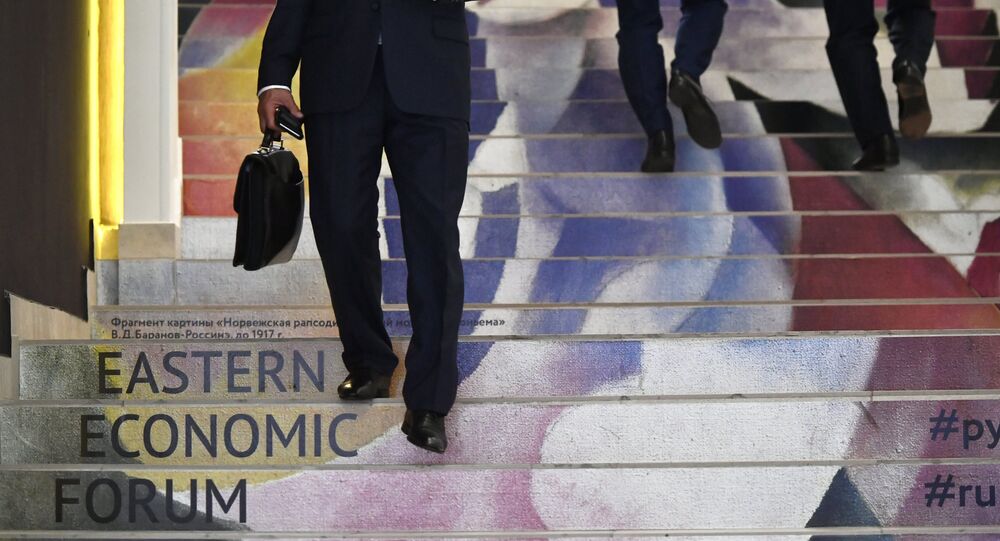 The head of Deloitte CIS Ian Colebourne has said that Russia’s Far East receives about 30% of the foreign direct investment that comes out of the Asia Pacific region.

Managing Partner of Deloitte CIS, Ian Colebourne, has commented on his company's strategies of turning towards to China and Asia on the sidelines of the fifth Eastern Economic Forum that has kicked off in the Russian far eastern city of Vladivostok.

Sputnik: You attend many events like this year’s Eastern Economic Forum, what are the major trends that we can expect to see here during the 2019 event?

Ian Colebourne: As you say, in terms of Saint Petersburg and now the Eastern Economic Forum, I think that the theme around Russia remaining open for business will be very much to the front, to the fore, and clearly the orientation towards the Pacific region, and to Southeast Asia, the opportunity for investment there is certainly something that we’ve seen over the past several years, a lot of attention to that as a region, and probably that has started to come through in terms of the levels of foreign direct investment which has been targeted to the region.

So I think that the overall theme as I say “open for business” and “business is good”, that will be my expectation of the forum.

Sputnik: In your opinion is the strategy of turning more towards the East, to China and Southeast Asia, is it paying off? Does Russia get any gains from that, actual gains?

Ian Colebourne: At a macro level, I think that this is about creating a portfolio of investors, so it’s not a question of one over another; it’s about engagement and spreading that opportunity among investors. As I say, we’ve seen over the past several years, I think this is the fifth Eastern Economic Forum this year, and the FDI coming out of this region is about 30% of all of the foreign direct investment into Russia is into the eastern region, and that’s made up of about 17 different countries across the region.

So it’s not clearly only one or two, it encompasses China, Japan, Australia, South Korea, so a whole host. And I think that we will see quite a bit in terms of engagement with India today and over the rest of the form.

Sputnik: Talking about Russian economy in general, your company recently announced that the market for mergers and acquisitions in Russia has doubled in the past six months compared to a similar period in 2018; does it mean that key Russian businesses are becoming more flexible in adapting to modern reality?

Ian Colebourne: So 2018 was a little soft, it was down on 2017, but we’re seeing, as you say, over the first six months we’re up from about $16.5 billion last year to about $33 billion of transactions, M&A activity over the first six months of this year, which is a good sign. In terms of the sectors their portfolio encompasses energy, as you would expect, as the leading sector, that’s about a third of the total number of M&A transactions or volume of M&A.

Financial sector, also very active, and the third most active area is around technology where you’ve got a broader group of smaller transactions. I think what we are seeing is that this is a product of not only the interest and the opportunity around this market but also probably an adaptation towards what is the new economic reality, and that’s reflected in probably a bit more pragmatism both in terms of buyers and sellers attitudes towards transactions.

Sputnik: One of your key areas of expertise is human capital and I wanted to ask you about current trends in that area. With artificial intelligence and other powerful factors affecting the job market today we see more and more negative predictions for the job market, we saw Elon Musk talking about people losing jobs because of the machinery. Do you think that embracing a lifelong learning strategy is enough to overcome this? Should young people do something more than that at the moment?

Ian Colebourne: I think that the disruption around technology, artificial intelligence, robotics, robotic process automation, so we are seeing that, that’s being piloted, we’re seeing that a lot of our clients are adopting or implementing these programmes. And I think that the anxiety around this is a reflection of the fact that more businesses are piloting those kinds of initiatives.

They’re seeing the opportunities that come through, and in many ways as we’ve seen through our global human capital trends, we think that’s a good thing for employment, in terms of the human experience of employment. So it removes some of the repetitive, mundane activities, and in other activities it means a richer set of information is presented for the individual to sort of consider.

So what we also see is, this is also in terms of lifelong learning, I think this is also a responsibility of individuals, but also this is not something that individuals on their own can respond to. The organisations or the most responsible organisations look at themselves as social enterprises and their impact not only in terms of profitability but the experience of their people and the impact on their communities. So a lot of businesses themselves are investing and providing the facilities around lifelong learning.

And I think we would also expect that this is something which requires legislative support and the broader kind of base, so that universities are adapted to be able to support that need for lifelong learning.

Then in terms of the younger generation, what we see in terms of the jobs of the future is not that these things are excluded but actually that jobs become richer, what we talk about is super jobs. So the data or the machine learning provides an enriched set of information, but it requires the very human skills of being able to interpret that data, apply it and consider it in the human world, and what it means; so there are skills around particularly communication, team working, collaboration, empathy and understanding the impact of decisions, which the machines can’t really supplant us with.

So in many ways those are things which not only you would need that technical skill to be able to understand the data and the analysis of it, but the strength of those interpersonal human kind of communication type skills will become increasingly important. So I think for the younger generation it’s balancing, not only equipping themselves to understand the technology, but also thinking about a broader experience in terms of their studies and things like drama, team working, team skills, like sport, and thinking about how they’re using those things in combination to equip them to deliver against these super jobs of the future.

Sputnik: Your company has been expanding its operations and looking further into Russia’s Far East, how is this going right now?

Ian Colebourne: So you’re right, we opened our office here in Vladivostok two years ago; we’re very happy with the progress. We continue to support a number of our clients based in the region. So this is something I’ve been doing over the past day or so, is meeting with those clients, understanding how their business is going. But also for us in terms of supporting investors from our global organisation, particularly around the Asian-Pacific region and in particular our China team.

We have a CIS desk in Beijing supporting a lot of investment from China into Russia, into the Far East. So for us it’s been critical to being able to have capabilities, experience, people who are able to work with our clients as they come in to the market rather than advising them remotely we have people on the ground to support them.

The views and opinions expressed in this article are solely those of Ian Colebourne and do not necessarily reflect those of Sputnik.