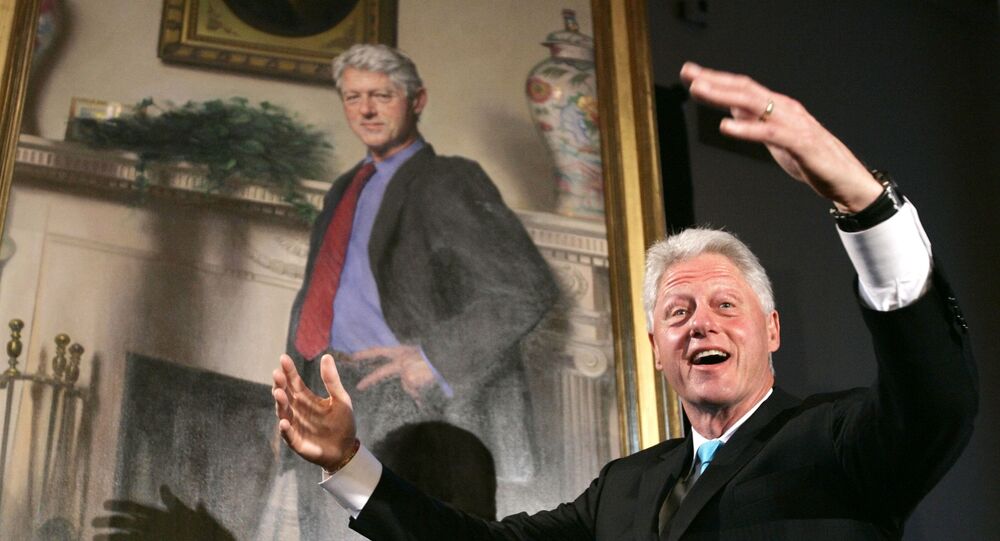 Former President Bill Clinton is trying to distance himself from billionaire paedophile Jeffrey Epstein, who has remained in detention since 6 July, however, Clinton's statement has made matters even worse triggering new questions and suspicions, says Wall Street analyst Charles Ortel.

US District Court Judge Richard M. Berman announced Monday that he would decide on accused paedophile Jeffrey Epstein's detention on 18 July. The billionaire, who was arrested on 6 July and charged with sex trafficking of minors, is seeking to live pre-trial at his Manhattan mansion. However, prosecutors believe that Epstein is a flight risk given his wealth and ties to powerful US figures.

Epstein is well-known for his high-profile connections. The ongoing sex scandal, however, has made the billionaire toxic, prompting prominent politicians to distance themselves from him, especially given Epstein's reported willingness to name names in exchange for a softer sentence.

SCOOP: Epstein's lawyer has already made a proffer to SDNY. Epstein will agree to cooperate with the investigation, including giving up the names of individuals that paid for activities with underage girls in exchange for a maximum sentence not to exceed 5 years - @OANN

​"Epstein is a rich, well-connected, and once powerful investor who, it seems, has been getting away with gross and grossly illegal criminal behaviour for decades", says Charles Ortel, a Wall Street analyst and investigative journalist. "Judging from the public record alone, one imagines that his antics may have involved a raft of prominent American and foreign individuals who have much to fear given these recent developments. For, it is likely that Epstein has much he might attempt to trade in return for leniency from the prosecuting authorities".

The Clintons Trying to Shrug Off Ties With Epstein

On 9 July, former US President Bill Clinton, who once called Epstein "a committed philanthropist", issued a statement saying that he had known nothing about the billionaire's "terrible crimes". The statement also said that the ex-president had made four trips on Epstein's plane – formerly dubbed the "Lolita Express" – in 2002 and 2003 and had held two meetings with the accused paedophile in his Harlem office and New York apartment.

​Bill Clinton's statement immediately triggered controversy, as Fox News broke on 10 July that the former president had dined with the sex offender in 1995 at the Palm Beach home of businessman Ron Perelman in South Florida, citing The Palm Beach Post story published at the time.

Three years ago Fox New's Malia Zimmerman revealed that while Epstein had been trying to evade a lifetime sentence back in 2007 his lawyers claimed that the billionaire paedophile "was part of the original group that conceived the Clinton Global Initiative", a programme founded in 2005 and associated with the Clinton Foundation.

In addition, Zimmerman cited a $25,000 donation made by Epstein through his COUQ Foundation to the Clinton Foundation in 2006 and exposed later by the International Consortium of Investigative Journalists (ICIJ).

Citing the COUQ Foundation's tax disclosures, The Guardian noted in February 2015 that the donation was made specifically in July 2006. That means that the money was sent about two months after the Palm Beach police filed a probable cause affidavit saying that Epstein should be charged with four counts of unlawful sex with minors and one molestation count. However, that very same July 2006 the billionaire was indicted on the lesser count by a grand jury due to some "rare steps" taken by the Palm Beach County state attorney, as The New York Times wrote at the time.

Additionally, Charles Ortel pointed out that "public accounts and records suggest that the issues of likely concern are not as narrow as Bill’s (or the Clinton family’s) relations with Epstein, but relationships among Epstein and his associates and the wider Clinton orbit".

"Specifically, Epstein’s close 'friend' Ghislaine Maxwell [a daughter of British publisher Robert Maxwell – Sputnik] is reported to have solicited and raised funds for the Clinton library project starting, possibly, as early as 1998, when Epstein and Maxwell also organised the COUQ Foundation, run from New York City", the Wall Street analyst, who has been looking into the Clinton Foundation's alleged fraud for the last three years, suggested.

"During these periods, the Clintons needed campaign contributions and arguably held influence of great potential values to Epstein and his associates", the investigative journalist presumed.

However, the controversy surrounding Bill Clinton's statement does not end here, since official flight logs indicate that he took 27 flights on Epstein’s Boeing 727 during at least six different trips, two of which were without his secret service agents, contrary to the ex-president’s claim that he had made just four journeys on the billionaire's private jet and that he had been accompanied by his agents every time.

"The two trips not acknowledged by Clinton were from Miami, Florida, to Westchester, New York, in early February 2002, which appears to be the first time that Clinton joined Epstein, and a trip in Asia", The Washington Examiner reported on 10 July, citing flight manifests.

Meanwhile, investigative journalist Conchita Sarnoff, the author of TrafficKing, who broke the Epstein sex scandal story in 2010, told Fox News @ Night that not only Bill Clinton had taken 27 flights on the "Lolita Express" but also "almost every time that Clinton's name [was] on the pilot logs there [were] underage girls, there are initials and there are names of many-many girls on that private plane".

Investigative journalist Conchita Sarnoff, who has done extensive reporting on Jeffrey Epstein, on Bill Clinton: “Almost every time that Clinton's name is on the pilot logs there are underage girls, there are initials and there are names of many many girls on that private plane” pic.twitter.com/YbWDPkkKMx

​"In the United States for some years now, minor children have not been allowed to travel on planes or internationally alone without written and verified permission", Ortel said. "It would seem, so far, that many of the under-aged persons identified came from troubled situations where parents were either absent or improperly uninterested in the welfare of their offspring".

The Washington Examiner revealed on 11 July that Clinton's press secretary Angel Urena had failed to explain the discrepancy between the number of trips the former president said he took on Epstein's plane and the flight logs. The media outlet noted that Urena insisted that Bill Clinton had never declined the protection of his Secret Service, who had been "on every leg of every trip".

According to Ortel, "we shall soon learn much more from other victims and from co-conspirators who may emerge in due course".