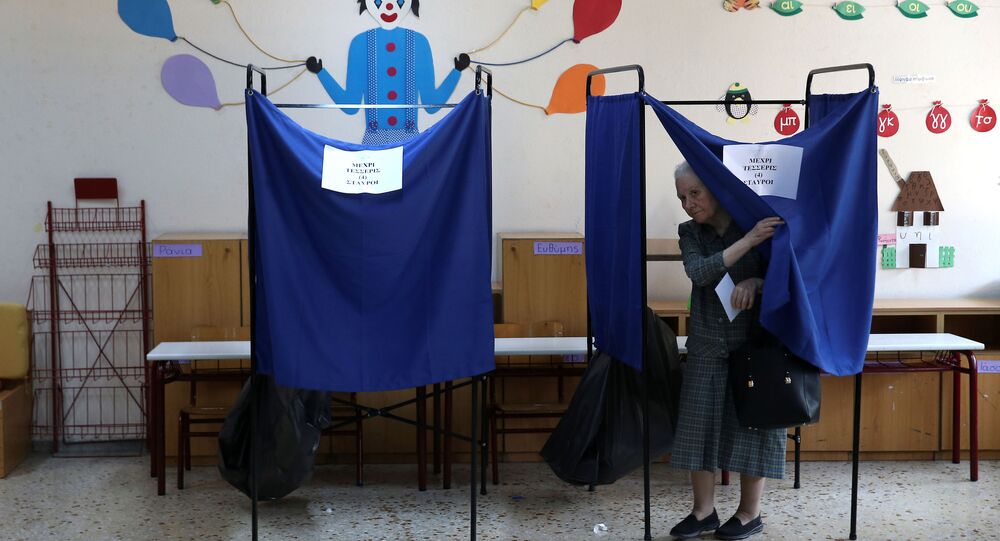 In the Greek elections on Sunday, the conservative New Democracy (ND) party walked away with an absolute majority of seats. Radio Sputnik’s John Kirakou, a Greek-US dual citizen, reported from Greece that while many fewer voters turned out this time than in 2015, those who did had shifted their support to ND from the fascist Golden Dawn.

Walking away Sunday with 39.85% of the vote, New Democracy won 158 seats in the 300-person legislature, while the leader of the outgoing coalition government, Coalition of the Radical Left (SYRIZA), lost 59 seats, dropping to a mere 86.

However, in terms of voter percentages, the numbers are far less dramatic: while newly minted Prime Minister Kyriakos Mistotakis’ ND saw an 11.75% increase from 2015, Alexis Tsipras’ SYRIZA only declined by 3.93%. Only 57% of the voting electorate actually participated in the elections, though.

The last election, held in September 2015 and sweeping the coalition of communist and socialist parties into power, came amid the threat of a “Grexit” and a default on Greek debt. However, Tsipras didn’t send the European Union and its Troika of financial institutions packing, as a majority of voters clearly wished - instead, he signed a new bailout deal that only deepened the already extreme austerity measures in place, plunging the southern European country into a deep recession from which it’s only recently begun to recover, and slowly.

This time, however, “the mood, really, is one of resignation,” Kiriakou told his co-host, Brian Becker, on Radio Sputnik’s Loud and Clear Monday. “This is the third time I’ve been in Greece during an election, and this is the first time I’ve seen an election where there is just no energy, no excitement, just this resignation.”

Kiriakou said the halcyon time of SYRIZA’s 2015 election victory, when the enthusiasm and high turnout among younger voters made it seem as if a new Greece was dawning, “seems to have passed.”

“When you look a little bit beyond the numbers, you see that SYRIZA’s overall support dropped by only three percentage points and that New Democracy’s rise in support came from those ultra-conservative, I would even say ‘fascist’ voters who had previously supported the neo-Nazi party Golden Dawn,” Kiriakou said. “They moved from Golden Dawn to New Democracy and gave them the majority.”

In the shift, Golden Dawn lost all 18 parliamentary seats it had held.

Kiriakou called Golden Dawn’s complete absence from the new parliament “the big shock of this election,” considering they were previously the third-largest party in the Hellenic Parliament. However, he said there’s a “new competing fascist party: it’s a pro-Moscow, pro-Putin fascist party. Its leader is kind of notorious here in Greece, because he has his own show on the shopping channel, the national shopping channel on TV, in which he sells letters purportedly signed by Jesus Christ to people who want to have their diseases cured.”

“So he’s a national joke, but he did well enough to win nine seats in parliament,” Kirakou said about Kyriakos Velopoulos, the leader of the Greek Solution party.

However, the far left “did quite well” too, he said, noting the Greek Communist Party (KKE) will have the fourth-largest representation among parties in the legislature.

“So the conservatives came in first, SYRIZA came in second, the remnants of the old socialist party, Pasok, came in third but with only 22 seats, and then the KKE won 15 or 16 seats,” Kiriakou said, noting there’s still a recount that has to take place. However, he noted that communist votes were split among four different parties, all of whom “each won votes,” and said the KKE would have done “even better” than they did if there’d only been one such party on the ballot.

Kirakou spoke Monday with the newly elected governor of the Dodecanese Islands, who he noted happens to be a family relation, about what he expected from the new government in power.

“I think for sure that the young Greeks, most of them didn’t vote because half of them don’t care, and the other half is really tired of all of the situation in Greece. I think the 42% [of non-participating voters] - it’s a really big number for these elections. That’s what I think.”

“Most of the young people here in Greece are racists, and they support Golden Dawn, but they really don’t know what Golden Dawn is,” the politician said. “I’ll tell you what: Golden Dawn is not just a right-wing party, it is a criminal organization - that’s what I think - and their members are neo-Nazis, and its leadership are mobsters. So they’re charged with murders and various crimes … but after all of this, even now, they’ve influenced a lot of young people here in Greece.”

Kirakou noted that Golden Dawn got the most votes in the islands and along the border with Turkey.

The Sputnik co-host recalled a story his cousin, the politician noted above, told him.

“He’d been working all night long … as he was walking to his car, a group of eight Syrians were walking up from the beach. They had just washed up on shore in a raft. He was trying to communicate with them, he had trouble communicating with them, and finally he was able to discern that they were from Syria and they were refugees. He asked them if they wanted some food: they said ‘yes.’ He went into a restaurant - the restaurants are open all night because this is a tourist area - when he came out they had already been arrested, and they were being taken to the local jail.”

“But just to give you an idea of how most people respect refugees and want to help them: they didn’t lock the cell, they left the cell door open, and they let him bring the food into the jail to feed these guys. They were kissing his hand, they were thanking him,” Kirakou said.

“So that’s where you see the real dichotomy. You see here in the islands … most people, most Greeks, have done literally everything they can to help refugees,” he said. “But then you’ve got that smaller group, much smaller group, that has been susceptible to an anti-immigrant backlash, and those are the voters that went to Golden Dawn.”