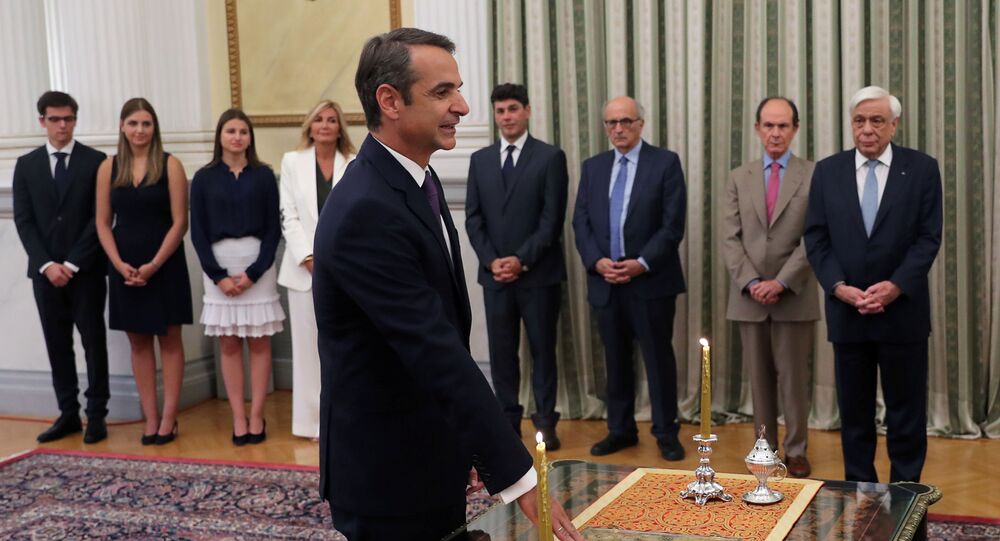 The day before, former Greek Prime Minister Alexis Tsipras called Leader of the centre-right New Democracy (ND) party Kyriakos Mitsotakis and congratulate him on his victory in snap elections.

According to election results, people handed Mitsotakis 40 percent of the votes on Sunday, while his opponent, former Prime Minister Tispras received 31.5 percent of votes.

​As a result of the election, the New Democrats will have 158 seats out of 300 in the country's parliament.

Following the inauguration, Russian President Vladimir Putin sent a telegram to Mitsotakis to congratulate him on taking office as the Greek prime minister.

"The Russian head of state highly appreciated relations with Greece, based on centuries-old traditions of friendship, cultural and spiritual affinity, and expressed confidence that the work of Mitsotakis at the head of the government will contribute to the development of dialogue and constructive cooperation in various spheres in the interests of the two nations to strengthen stability and security on the European continent," the statement said.

Kyriakos Mitsotakis, who is the son of one of the country's longest-serving parliamentarians and former prime minister Constantine Mitsotakis, took charge of the New Democrats three years ago.

Alexis Tispras called the snap election after the ruling leftist Syriza party lost to New Democracy in the European Parliament vote last May.