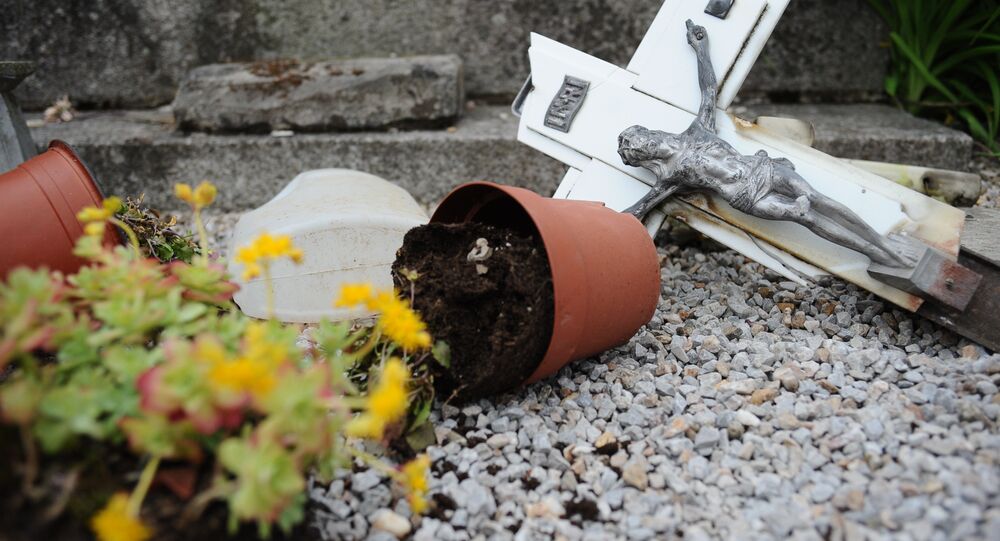 Crucifixes removed or covered with masking tape, the abolition of Christmas carols and nativity plays in schools - is it right to deny one's own culture and identity in Italy in the name of multiculturalism?

Italian schools see scandals break out on a regular basis when teachers cancel Christmas events. Recently, at the Chivasso hospital in Piemonte, the management decided to hang crucifixes out of view after renovations, but this was met with objections from some parties.

In Toscana, crucifixes were covered with tape on the instructions of the wife of a candidate from the Democratic Party. Can religious symbols, part of Italian culture, really insult people that belong to other denominations? Aisha Lazzerini, a member of the Legal Affairs Committee of the COREIS (the Italian Islamic Religious Community) discussed the issue.

Sputnik: There's a constant debate regarding crucifixes in public areas. Do you think a crucifix on a wall can really offend the feelings of people of other religions?

Aisha Lazzerini: No, I believe that a crucifix not only doesn't hurt the feelings of a truly religious person, regardless of the faith to which he or she belongs, but is, in my opinion, an important symbol in our country with its rich history and well-established system of values.

In the past, there were many contradictions, sometimes it was interpreted as a position for or against Islam, but this is the absolutely wrong approach, and I believe that this is just a scandalous manipulation of religious symbols.

As for communities such as COREIS, we have absolutely nothing against the demonstration of the crucifix, and we respect it and honour it as a sacred symbol.

Sputnik: Muslims who live or come to Italy know that this is a Catholic country with its own customs, so why are these customs and traditions not accepted in some cases? Why are there sometimes incidents on religious grounds?

Aisha Lazzerini: I suppose that this comes mainly from ignorance, at best, and perhaps from a sense of one’s exclusivity, and there's nothing religious about that.

In Islam, there is a figure of Jesus, and one like Maryam or Maria, and she, for us Muslims, is the immaculate mother, to whom a whole sura of the Koran is devoted, a whole chapter.

Therefore, from a doctrinal point of view, it is unclear how a symbol referring to Christ can be offensive to Muslims.

The nativity play debate in schools was also carried out by those Muslims that may not have studied their own religion sufficiently.

This is the position of ignorant exclusivity, which sometimes, unfortunately, is reflected in the actions of state institutions, which, due to wrong incentives, remove the crucifix.

If this happens, then it is wrong. In my opinion, this line of conduct should not be followed.

Sputnik: Multiculturalism cannot exist if society starts to hide the symbols of its culture, would you agree?

Aisha Lazzerini: It is exactly because multiculturalism and religious pluralism come from an idea that differences are not a problem that need to be destroyed and hidden, but, on the contrary, additional wealth that everyone brings and which can contribute to greater mutual openness for all.

This does not mean giving up our roots or our religion, but simply means joint exploration of the spiritual wealth that we possess.

Sputnik: As a representative of the Italian Islamic community what does it mean for you to have dialogue and joint initiatives with Italian Catholics and representatives of other religions?

Aisha Lazzerini: It is very important to us, one of the cornerstones of COREIS activity is specifically interfaith dialogue.

We are promoting initiatives mainly with the Christian and Jewish communities because we have more direct contacts with them.

This year marks the 800th anniversary of the historic meeting between St. Francis of Assisi (San Francesco d'Assisi), the patron saint of Italy, with Sultan Al-Malik in the era of crusades and battles.

This saint and this great Islamic scholar came to mutual recognition and spiritual elevation from this meeting.

For this occasion, we are preparing a series of meetings where we will reflect on this historical example, which, as it seems to us, even today can teach us a lot.

Views and opinions expressed in this article are those of Aisha Lazzerini and do not necessarily reflect those of Sputnik.