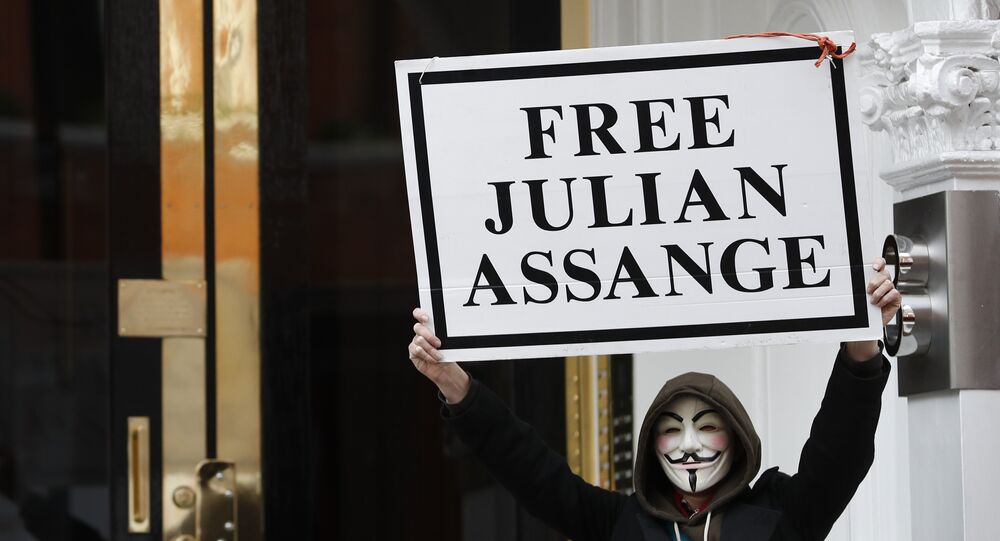 After WikiLeaks tweeted an urgent warning that the Ecuadorian government had arranged for Julian Assange’s arrest Thursday, supporters rallied outside the London consulate where the journalist has sought asylum since 2012. On Friday, Quito walked back the rumors - a reversal one journalist told Sputnik only happened due to the outcry.

"A high level source within the Ecuadorian state has told WikiLeaks that Julian Assange will be expelled within ‘hours to days,'" document leaking website WikiLeaks tweeted Thursday, noting Quito "already has an agreement with the UK for his arrest."

Ecuadorian President Lenin ​Moreno blamed Assange earlier this week for the developing scandal allegedly involving Moreno and his family with INA Investments Corp, which has come to be known as the INA Papers scandal.

© REUTERS / Peter Nicholls
WikiLeaks: Assange to Be Expelled From Ecuadorian Embassy Within 'Hours or Days'

In late February, Ecuadorian legislator Ronny Aleaga told reporters he had "received a dossier anonymously filled with documents that will implicate Lenin Moreno and his family in alleged crimes of corruption, perjury and money laundering." However, WikiLeaks wasn't responsible for this document leak, having merely reported on the leak after it was made by other sources.

During an interview Wednesday with the Ecuadorian Radio Broadcasters' Association, Moreno said Assange had "repeatedly violated" the terms of his political asylum with Ecuador and further asserted that Assange had played a role in the circulation on social media of "photos of my bedroom, what I eat, and how my wife and daughters and friends dance."

However, after friends and supporters of Assange rallied in defense of the journalist Thursday evening into Friday, the Ecuadorian government changed its tune, referring to the claims as "baseless rumors" and asserting its independence from other nations, Sputnik reported.

Radio Sputnik's Loud and Clear spoke Friday about the situation with Joe Lauria, the editor-in-chief of Consortium News and the author of the book "How I Lost, By Hillary Clinton."

​Lauria said that the weekly three-hour vigil for Assange he hosts on Fridays would this time continue "indefinitely" because of the "dire situation at the embassy" to add to the efforts by demonstrators camped outside the Ecuadorian embassy in London to protect Assange. He noted Assange's mother, Christine, would be appearing on the program this Friday.

Lauria noted that "someone in the Ecuadorian government, apparently a diplomat at the consulate, may have been the source for WikiLeaks," which tweeted the alert Thursday, citing a "high level source." Lauria said the "intended purpose" of the tweet appeared to be to "get the government to back off," and indeed, by Friday, Quito was issuing strong denials of having arrived at a decision about Assange's presence at its consulate.

Lauria noted that the primary rub Moreno has with Assange isn't really true. "All WikiLeaks did was to tweet about it, and the Courage Foundation, which is linked to WikiLeaks, did write a report about it — but he's not responsible for this."

Moreno is "trying to use this to deflect attention from the trouble he's in and to try to say that Assange has broken this protocol," Lauria said. "We should talk about that protocol, because it was March of 2018 — a year ago — that Assange was told he could stay only if he doesn't tweet or say anything publicly about politics whatsoever. Moreno was upset about what he said Assange had been tweeting about Catalan independence being made obviously some kind of demarche to Ecuador, so he said Assange particularly can't speak about the US or Spain, his close allies of Ecuador, so if he wants to stay in the embassy, he has to shut up."

"Assange never agreed to that," Lauria noted. "In fact, that is against international law — not that any country really respects that — but if you're ever granted asylum, as Ecuador did give Assange… so they cannot expel him and… they have to give him freedom of speech and other, freedom of movement and whatnot; those are the terms of the international law in regard to political asylum."

"So, Ecuador is violating that, and they're making this threat to get him out, and in the meantime they're trying to make his life hell so he will leave on his own, which would be the preferred outcome for the US for UK and Ecuador, so they wouldn't be seen going in, violating asylum law by actually kicking him out, arresting him, when he goes on British soil again," Lauria told hosts John Kiriakou and Walter Smolarek.

The journalist dismissed the idea that Assange had anything to do with leaking photos from Moreno's personal accomodations and family events, noting that Assange "doesn't have access to internet, so he can't be hacking anyone. Someone at WikiLeaks could be, but there's no evidence for this. This is clearly an attempt [by Moreno] to protect himself and to destroy Assange at the same time, and to please his masters up in Washington — if, in fact, he has reached a deal over debt relief or other things that he would want in exchange for turning Assange over. We don't know about that, either."