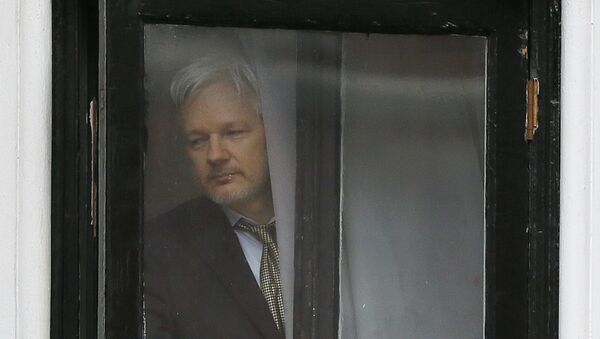 WASHINGTON (Sputnik) – WikiLeaks founder Julian Assange faces the prospect of cruel and degrading treatment if he is expelled from Ecuador's embassy in the United Kingdom and deported to the United States, UN Special Rapporteur on torture Nils Melzer warned in a press release.

"In my assessment, if Mr Assange were to be expelled from the Embassy of Ecuador, he is likely to be arrested by British authorities and extradited to the United States", Melzer said. "Such a response could expose him to a real risk of serious violations of his human rights, including his freedom of expression, his right to a fair trial and the prohibition of cruel, inhuman or degrading treatment or punishment".

Assange's Backers Rally Near Ecuador's Embassy in UK as He Faces Alleged Ouster
WikiLeaks earlier quoted a "high level source" saying Assange will be expelled from the Ecuadorian embassy within hours or days.

WikiLeaks claimed the Ecuadorean government had made a deal with UK authorities that Assange would be arrested. Quito would allegedly justify its decision by a WikiLeaks publication that linked President Lenin Moreno to a money-laundering scheme. Moreno is reportedly seeking debt relief from the United States, which wants Assange jailed for leaking US military secrets, which exposed its atrocities in Iraq and Afghanistan.

Assange has been in Ecuador's London embassy since 2012, fearing that he will be arrested and extradited to the US for publishing thousands of military and diplomatic cables on WikiLeaks.

The US Department of Justice Department has secretly filed criminal charges against Assange, according to published reports.