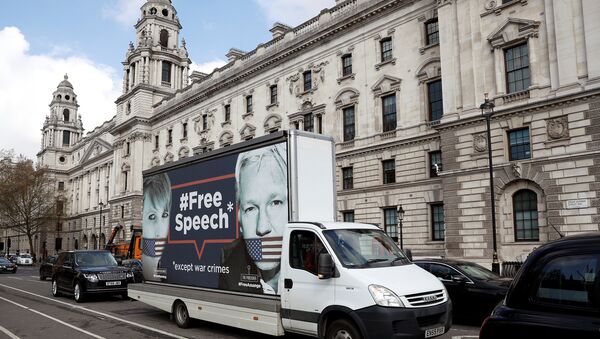 WikiLeaks warned Thursday that founder Julian Assange could be expelled from the Ecuadorian Embassy in London within "hours to days" by Ecuadorian President Lenin Moreno, citing "a high level source within the Ecuadorian state."

The source further noted that Quito already has an agreement with the UK for the arrest, according to a Thursday tweet by WikiLeaks.

Ecuadorian Court Dismisses Assange's Appeal on Embassy 'Living Restrictions'
​Moreno blames Assange for recent allegations of corruption within his administration, accusing WikiLeaks of intercepting his phone calls and private conversations, and he insinuated Wednesday during comments to the Ecuadorian Radio Broadcaster's Association that Assange had played a role in the circulation of "photos of my bedroom, what I eat, and how my wife and daughters and friends dance" on social media.

The founder of the document leaking and publishing website has dismissed the allegations as "completely bogus."

The Ecuadorian Foreign Ministry said it did not comment on claims about the possible expulsion of WikiLeaks founder Julian Assange from the Ecuadorian embassy in London, calling these claims "rumours."

"Ecuador does not respond to rumours, speculations and assumptions which are not supported by any documents," the ministry said, as quoted by the Comercio news outlet.

Assange has been living in the Ecuadorian embassy in the United Kingdom since 2012. The activist has repeatedly said he fears extradition to the United States due to the fact that he's published thousands of classified US documents that have been leaked to his website over the years. His defence team has noted media reports suggesting Moreno wants to reach an agreement with the United States to hand Assange over to Washington in exchange for "debt relief."