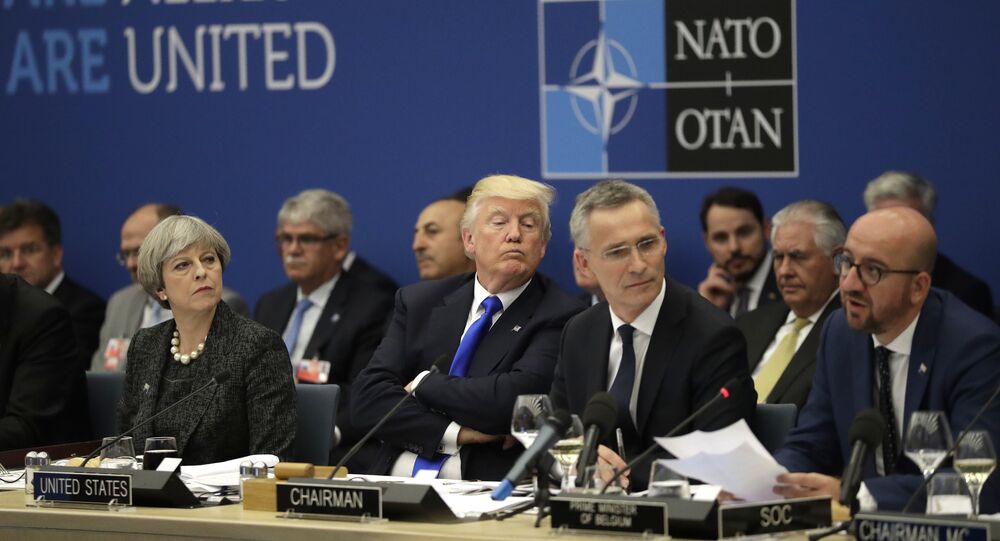 US President Donald Trump has urged European NATO members to contribute even more to the alliance's defence budget. Professor Marcello Ferrada de Noli, editor-in-chief of the geopolitical magazine online "The Indicter" - TheIndicter.com, has discussed the alliance and its issues as NATO celebrates its 70th anniversary.

Sputnik: 70 years on, the alliance is looking to expand with North Macedonia eyeing membership in the bloc. Why does the alliance, created during the Cold War, still exist?

Marcello Ferrada de Noli: That the alliance still exists, has, in my opinion, little to do with its original purpose. Instead, NATO nowadays has emerged rather as an instrument for geopolitical expansion, aimed at boosting Western-countries' arms industries, and promoting/protecting their corporate investments around the world.

That has been achieved by NATO powers across a variety of strategies, for instance:

a) Through the successive annexation (read engulfing) of small and dependent economies – such us Macedonia now, as mentioned in the question.

b) Increase of weapons-export operations, aimed at strengthening the economy of the arms producers of the main NATO actors, such as the US, Britain, France, and Germany. Recipients of these exports may chiefly be the rest of NATO-dependent countries, but also, and increasingly, other client states.

Furthermore, the selling of weapons by these NATO countries, by fomenting both internal and inter-state armed conflicts, are potent reasons for the increasing geopolitical unrest the world is now experiencing. These NATO powers would then use the geopolitical instability they provoke, in order to obtain more military expenditures domestically, more arms exports, and so the vicious circle continues.

Here are some facts from SIPRI about these figures: While the US continued being the principal arms exporter in recent years, France increased its arms exports by 27 percent (2008–12 and 2013–17), and Germany stayed as world’s fourth largest exporter. In contrast, the power that NATO refers to as "aggressor", namely Russia, had its arms exports decreased by 27 percent in those periods.

Sputnik: During a meeting Trump emphasised the importance of a stronger NATO in opposing Russian aggression, yet underscored that he still believes that the relationship with Moscow will be good. In your view, can we speak about cooperation and good relations between the US and Russia while Washington perceives Moscow as an aggressor and is asking NATO to increase its military budget?

© Sputnik / Aleksei Vitvitsky
NATO Sec Gen Stoltenberg Says Hitler, Stalin and Daesh Were Enemies of Freedom
Marcello Ferrada de Noli: There might be powerful rhetoric in talking of “Russian aggression”, and Trump is directly connecting that with the issue of getting more economic contribution to NATO from other members.

But rhetorical propaganda is one thing, historical facts another, and especially in the context of the multiple military interventions by NATO countries since the fall of the Soviet Union. And, important to clarify, interventions not approved by the UN and much less legitimated in International Law. In other words, what NATO has been doing is instead the legal definition of "aggression" in geopolitical terms.

A clear illustration of the above contrasting terms is currently found in the Syrian conflict: while Russia is there legally, invited by a legitimate government, the US and France are there illegally, as occupation forces, blatantly. And the situation can eventually present such "surrealistic" episodes –as when US officials seriously tried to argued that its military was in Syria to drive away Iranian forces being there “long away from Iran’s own borders”. As if US forces illegally occupying Syrian territory were not outside US borders, and quite far away from there! And again, the Iranians are also there are invited by the Syrian government.

Of course, the White House is aware of all that, and all EU governments too and as well their military intelligence. It’s only their media that insist to carry on with the disinformation strategy. To evoke “Russian aggression” is a messaging constructed for the public, both in the US and in the other NATO countries. Without that notion it would be impossible to get public support for an increase of military expenditures.

In my opinion, if Trump is sincere in aspiring for good relations and cooperation with Russia, he should start by providing a substantial good-will initiative such as lifting the economic sanctions.

Sputnik: Trump is urging NATO member states to make more monetary contributions picking on Berlin in particular. How much does the US pressure on its allies send cracks across the bloc?

Marcello Ferrada de Noli: As I said, the issue of agitating a purported “Russian aggression” is for President Trump necessary to reach a better economic balance, more favourable to the Americans in the NATO constellation. And corollary, what Trump would obtain if/when the other NATO nations increase its economic share to the alliance, is that the increase would entail more orders to the US weapons industry. The increase in the separate national budgets are devised to strengthen their own military capacity, which means the purchasing of new weaponry from the rest of NATO countries. And as I noted above, the US is the chief arms producer and exporter. In the end, in my opinion, it is an economic issue, not only a military strategic one. Carl von Clausewitz (1780–1831) wrote that war is the continuation of politics by other means, but he forgot to mention that politics is the continuation of economics. This axiom being particularly relevant to modern geopolitics.

As to the issue of cracks within the NATO alliance, these began prior to the Trump era. An analysis in a broader period would rather show a deterioration of the alliance – in which the European scenario is concerned – from years ago. We see, for instance, NATO countries abandoning the joint Afghanistan venture, the launching of the EU’s armed forces initiative, the occasional disagreements regarding sanctions and/or economic ventures with Russia, etc.

So, the dispute on what budget percentage should NATO countries in Europe assign to the alliance might worsen a situation that was already deteriorating before.

© AP Photo / Matthias Schrader
US Vice President Lashes Out at Germany Over Defence Spending, Nord Stream 2
And how the American establishment is reacting to that should not only be assessed on what Trump says. Bolton and Pompeo, are launching the “hemisphere-defence” concept –which most recently appeared around the Venezuela conflict. Whether this represents a design of NATO’s leading power to expand in Latin America in order to compensate for a cooler relationship with Europe, cannot be ruled out.

Amid its 70th anniversary, NATO’s momentum seems to be fading away. The propaganda design of portraying Russia as the world’s arch aggressor has not been convincing at all. New governments in Europe, and most important, new political insights on the part of voters, have gradually been changing the pattern of the last decade. And this has appeared in the direction to preserve peace, and hopefully, to build a friendship between Russians and the rest of Europeans.