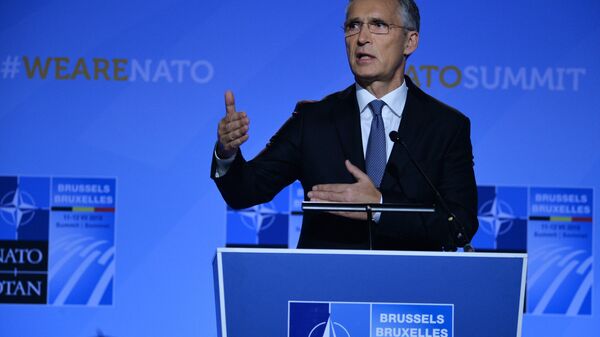 Jens Stoltenberg, the secretary general of the North Atlantic Treaty Organization (NATO), addressed a joint session of Congress Wednesday morning right after a meeting with US President Trump.

Stoltenberg emphasised NATO's importance in preserving peace during the post-World War II era. Stoltenberg also noted that “questions are being asked on both sides of the Atlantic about the strengthening of our [NATO] partnership” and urged members to increase defence spending.

The preservation of world peace became one of the pillars of the United Nations, the organisation which was founded four years prior to NATO by members of the Allied Forces. The draft "Declaration of United Nations" declaring world peace as the main principle of the post-World War II era was signed even earlier in 1942 by 26 countries, while the founding proposals of the organisation were worked out by representatives of China, the Soviet Union, the United Kingdom and the United States at Dumbarton Oaks in August-October 1944.

In his speech, the NATO chief added that “there are differences,” over trade, energy, climate change policy, the Iran nuclear agreement and burden sharing among NATO allies – issues raised earlier by Trump during the meeting in the White House.

NATO Does Not Want to Isolate Russia, Seeks Talks on Arms Control - Stoltenberg
In his opening speech for the meeting, Stoltenberg also said that NATO should be prepared for a world without the Intermediate-Range Nuclear Forces Treaty between the US and Russia and called on the Russians to desist from developing new kinds of missiles. The Trump administration in February started the six-month process for the United States to officially withdraw from the treaty, which was backed by NATO, claiming that Russia is in violation of the treaty. Russia has repeatedly denied the allegation, pointing out that it is unsubstantiated, while complaining that US defence systems in Europe have been equipped with launchers capable of firing cruise missiles at ranges prohibited under the INF Treaty.

The NATO meeting coincides with the 70th anniversary of the foundation of the alliance. The North Atlantic Treaty Organisation, an intergovernmental military bloc, was created in 1949 by 12 countries.

*Daesh, also known as ISIS, ISIL or Islamic State is a terror organisation banned in Russia, US and many other countries.