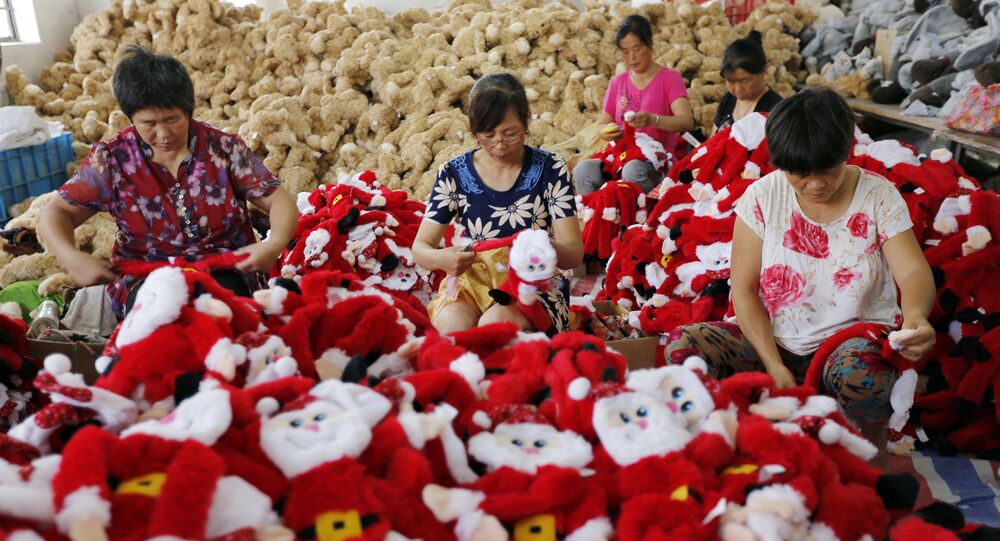 US Treasury Secretary Steven Mnuchin has said he had a “productive working dinner” in Beijing, without elaborating about the details. Mnuchin and US top trade negotiator, Robert Lighthizer, are in Beijing for trade talks on Thursday and Friday. Earlier, US officials said China has made unprecedented proposals in trade talks with the United States.

Reuters reported, citing an anonymous US official, that Beijing has proposed new measures about forced technology transfer. According to the report, the two sides are working on agreements in several other areas, including cyber theft, intellectual property rights, services, currency, agriculture, and non-tariff trade barriers. Meanwhile, US lawmakers have introduced legislation aimed at boosting Washington’s relations with Taiwan.

© AP Photo / Mark Schiefelbein
Huawei Sales Top $100bn Despite US-Led Trade War, Smear Campaign Against Company
The document would allow US President Donald Trump to review State Department guidelines on relations with Taiwan, to direct the Defence Department to include Taiwan in joint military training exercises and express support for US arms sales to the region. In a statement, Cotton said that this legislation “would deepen bilateral security, economic and cultural relations, while also sending a message that China’s aggressive cross-Strait behavior will not be tolerated”.

According to the current legislature, Washington has no formal ties with Taiwan but is obliged by law to help defend the island nation and provide it with weapons. Since 2010, the United States has sold Taiwan more than 15 billion worth of weaponry. Sputnik has discussed US-China trade negotiations with Carl Fey, a professor of international trade with the School of Business at Aalto University.

Carl Fey: Yes, it does look like the talks in Beijing have made some progress. And of course, next week we will see Vice Premier Liu in the US to continue these talks on 3 April.

It is not totally clear exactly what has been agreed to but both parties do seem to be suggesting that some progress has been made. And one may be really approaching within some weeks the end of these talks. It looks like China has been more open to talking about ways to prevent required technology transfer.

It looks like also China has been more open than previously in working to try to ensure that IPR (Intellectual Property Rights) is better protected. And in all honesty, this really is something that China has been working on independent of these negotiations.

© CC0
Trade War: 1 Million Lbs of Smuggled Chinese Meat Seized in NJ Amid Swine Plague
Sputnik: How big of a deal was this whole forced technology transfer that we heard that they have made some unprecedented offers of on to the US in terms of… was that one of the major sticking points would you say?

Carl Fey: China has been moving in the direction of decreasing the requirements for technology transfer with US investments even before the trade dispute. So the direction of travel, China is open to.

However, the sort of extent that the US wanted this to move forward has been a significant sticking point and both the reason for investment law released in China and the current negotiations have pushed this point apparently much further than when we thought could be happening.

So, indeed it seems that the US has managed to get some real concessions in this from China.

Sputnik: Do you think the US will give up anything in return?

Carl Fey: Well, I think that one of the real sticking points at the moment is the US would like to keep quite a lot of tariffs in place and remove them step by step as China shows they fulfill their promises.

© CC BY 2.0 / United Soybean Board
Trade War Cut US Soybean Exports to China 90% - Top USDA Economist
On the other hand, China had as their initial negotiating stance that all tariffs have to be removed before any deal could be finalized. It seems that what is likely to happen is something in between and exactly where we end up in that, I think is probably where surely both sides are going to have to compromise but especially the US now that China has made some concessions.

Sputnik: This whole thing has been really dragging on since the first rounds of tariffs that were tit-for-tat. Do you think that we are getting any closer to seeing a final resolution or is this going to continue for another year or months to come?

Carl Fey: I think there is a reasonable chance that some agreement can be reached within the coming weeks or let’s say in any case during the month of April.

But I have to say whenever President Trump is involved I think you only know for sure that a deal is reached when it is really reached. Also, one of the key sticking points that we haven’t talk much about yet is industrial support by the Chinese government for companies in China. And it remains to be seen how this can be worked out.

The Chinese government is rather adamant that they want to be able to continue a fair amount of industrial support. And in fairness, most countries around the world to varying degrees do provide some industrial support. So, it is a little bit of a tricky question but as you are probably aware China is really trying to move from being the factory of the world to the place that is developing as well as producing things for the world.

© AFP 2020 / Paul Faith
Chilling Echoes: UK Threatens Trade War With Ireland in Search of EU Concessions
And so with this, this government has been providing quite some incentives to Chinese companies to sort of focus more on R&D (Research and Development) and higher valued activities and they are very reluctant to give that up.

Sputnik: Do you think the issue of 5G and China’s desire to develop that in some parts of the world is going to be on the table at all?

Carl Fey: I think that there may be a little bit of discussions about this particularly as things come to simply representing or respecting rather IPR and I think that is probably how it come in.

But I think that China is a leader in 5G, it is indisputable. Chinese telecoms such as Huawei have invested an awful lot of money, much more than the Western counterparts in R&D in recent years.

And so they really now have a lot of their own world-class R&D and they are leading in 5G. I don’t think there is much one can do to make it so that Chinese companies are not playing a major role in 5G. They will be a major part of the standard negotiations as well. So, it may come out in terms of IPR, but I don’t think in a broader context.

© AFP 2020 / NICOLAS ASFOURI
Chinese Authorities Recognise Impact of Trade War With US on Country's Economy
Sputnik: The US is very competitive on this issue, of course, because whoever does lead the world in 5G is going to have a lot. Obviously, there are a lot of things that are going to be attached to that and I mean that is going really push that country or company really forward in a big way. But I am just wondering, right now the US has been talking a lot about security issues and IPR issues when it comes to 5G. Do you think that this really is a security and IPR issue or do you think it is more about competitiveness?

Carl Fey: I think that honestly it is probably more about competitiveness and I mean I think one needs to take a step back. The US had unfavorable trade deals with most of its trading partners because the US has been a major proponent historically of free trade and thus it wants to have trade deals.

It didn’t always necessarily get the best deal that they might have been able to. So, I think there was a need to re-negotiate some international deals for the US.

I don’t actually think that the approach of putting in tariffs was the right way to go about it but anyway that’s done and we can’t undo that. But I think we are now trying to come up with a situation where one can rebalance patterns we set. I mean that is the main goal of things.

Views and opinions expressed in this article are those of Carl Fey and do not necessarily reflect those of Sputnik.