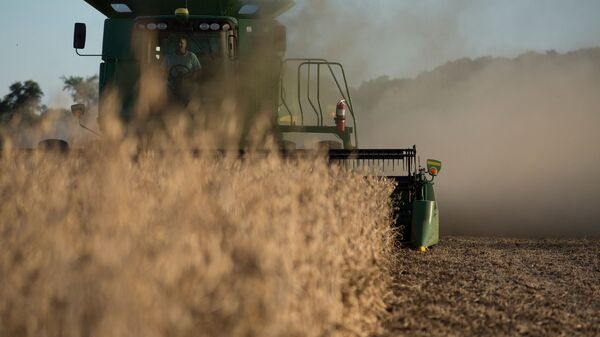 US agricultural exports to China are forecast to fall significantly in crop year 2019, an official in President Donald Trump’s administration said this week, noting that the damage was a result of the administration’s own trade policies with China.

"Under the trade dispute," soybean exports to China "plummeted by 22 million tonnes, or over 90 percent," said US Department of Agriculture Chief Economist Robert Johansson this week in the nation's capital.

Trump essentially started a war with US soybean farmers in America by trying to push China into a more favorable trading arrangement.

Overall, if the US administration continues its current trading policies, China will go from being the biggest buyer of US agricultural products in 2017 to the fifth-largest buyer in 2019.

"The share of total US agricultural exports to China in value terms is projected to be 6 percent, down sharply, with China falling from the top market in 2017 to fifth place," the economist said at the USDA annual forum in Washington.

Trump has defended his tariffs on Chinese products on the grounds that billions of dollars are flowing into reserve accounts at the US Treasury Department. While that may satisfy Trump's business-oriented side, it just might kill him politically in 2020: Farmers in so-called flyover states like Illinois, Indiana and Wisconsin are going bankrupt at a faster clip than during the 2008 Great Recession.

The American Soybean Association (ASA), a lobby group representing all soybean farmers in the US on domestic and international issues, basically predicted the downfall of farmers last year when Trump's administration imposed import duties on Chinese products worth hundreds of billions, spurring Beijing to respond with its own tariffs on US goods going into China's market.

"If this trade war is not resolved soon, we will see irreversible consequences," Davie Stephens, who is vice president of ASA and also a soybean grower in Clinton, Kentucky, said in a statement last fall.

In addition to American farmers being forced into bankruptcy, US agricultural prices "will likely continue to be depressed for years to come because we have lost our reputation as a reliable trading partner," a spokesman for the National Farmers Union told Sputnik News earlier this month.

ASA maintains that Congress should swiftly ratify the USMCA trade agreement in 2019; that Trump should "seek an outcome that removes tariffs and allows for more soybeans to be sold to China"; and that it supports the administration's pursuit of fresh free trade agreements (FTAs) with Japan, Britain and the European Union.

"Right now we are paying the price for retaliatory tariffs imposed on imported goods produced by some of our best trading partners," Illinois Farm Bureau President Richard Guebert Jr. said in a statement earlier this month responding to Trump's State of the Union address.