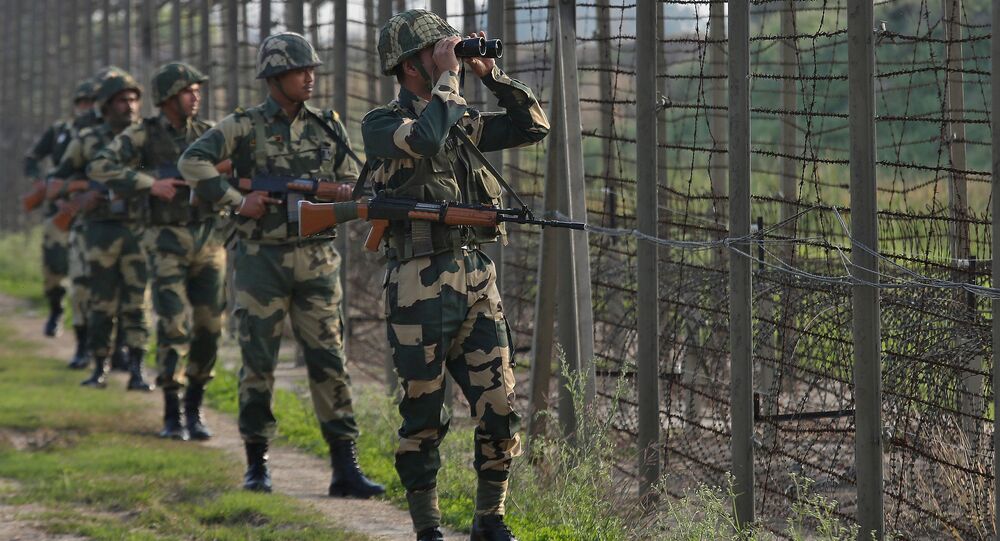 Speaking during a video conference between Moscow and New Delhi, former diplomats and security experts voiced a unanimous perspective that the normalisation of relations between India and Pakistan would depend highly on the action the latter takes against terror elements operating from its soil.

New Delhi (Sputnik) — Stressing that Indian and Pakistan are both full-fledged members of the Shanghai Cooperation Organisation (SCO), it can serve as an apt platform for aiding peace talks between the nuclear-armed neighbours.

Taking part in a video bridge conference between New Delhi and Moscow, Ambassador Vyacheslav Trubnikov, Vice-President of the Russian Council on International Affairs and Member of the Directorate of the Institute of World Economy of the Russian Academy of Sciences opined that the current Indian government led by Narendra Modi was best suited to take credible steps in the direction of peace.

"The current government in New Delhi has popular support and is known for its nationalist approach on issues and any step taken by the government will not be doubted," Ambassador Trubnikov said on the occasion.

© AP Photo / Mukhtar Khan
Pakistani Envoy to Return to India as Tensions De-escalate - Foreign Minister
The Shanghai Cooperation Organisation (SCO), of which both India and Pakistan are members, must be explored as a platform to aide peace between India and Pakistan, Ambassador Vyacheslav Trubnikov added.

Ambassador K P Fabian, India's Former Permanent Representative to the United Nations and Professor at the Indian Society of International Law, underlined the importance of bringing an end to the terrorism allegedly sponsored by Pakistan.

"Between India and Pakistan, it is time for diplomacy to come into play and deescalate the situation. Let me also say that any amount of talk cannot bring in result unless Pakistan stops its role in promoting terror elements," Ambassador Fabian said.

© AP Photo / Mahesh Kumar A.
Modi Vows to Make 'Big, Bitter Decisions' as India Reportedly Downs Pak Drone
Brig (retd) Rahul Bhonsle, Director of Sasia Security-Risks.com, a strategic risk and knowledge management consultancy, welcomed the idea of using the SCO in playing a constructive role in the India and Pakistan relationship. However, he flagged the notion that the "deep state" of Pakistan is a hindrance to any form of dialogue.

"SCO can certainly play an important role in engaging India and Pakistan to bring about peace and it will also be unprecedented for SCO to take up a bilateral issue on its table. However, we must also be aware that the deep state of Pakistan which consists of the Army and the Pakistani intelligence could be a factor which can hamper any result of such a dialogue," Rahul Bhonsle said.

© REUTERS / Francis Mascarenhas
'Pause is One of the Positive Outcomes in India-Pakistan Tensions' – Analyst
Boris Volkhonsky, Associate Professor at the Institute of Asian and African Countries of Moscow State University and Alexei Kupriyanov, Researcher at the department of international political problems at the Russian Academy of Sciences expressed their concern over the overpowering role of Pakistani intelligence in any peace process.

Tensions between traditional rivals India and Pakistan peaked after the Indian Air Force conducted an air raid against an alleged training camp of the Pakistani-based terrorist group Jaish-e-Mohammed. The terror group had claimed responsibility for a suicide attack on a convoy of Indian paramilitary forces on 14 February that killed over 40 soldiers. India struck targets inside Pakistan, while Pakistani air defences shot down an Indian fighter plane and captured a fighter pilot before releasing him two days later.

The views and opinions expressed by the speakers are their own and do not reflect the official position of Sputnik.