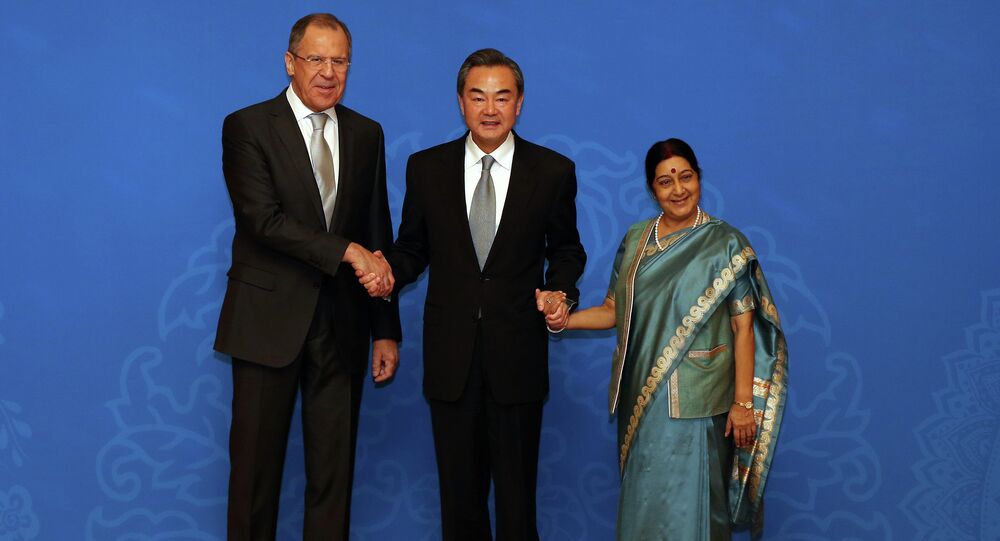 Top diplomats from Moscow, Beijing and New Delhi held talks in China’s Wuzhen as part of Russia-India-China (RIC) format. For years RIC was considered by many to be supplementary to BRICS and SCO, but now the bloc seems to be gaining even more importance.

Wooden boats move slowly under stone bridges, passing through channels with ancient buildings on both sides – this scene is typical for China’s historic town of Wuzhen. But for two days in the end of February the country’s own little “Venice of the East” has been turned into a busy international venue – a place for discussions on regional and global politics, as foreign ministers Sergey Lavrov, Wang Yi and Sushma Swaraj arrived in town for Russia-India-China ministerial meeting.

Wuzhen’s atmosphere pretty much resembles the tone and the atmosphere at Russia-India-China talks: there is no rush, no pressure, and the three sides manage to craft solutions, which are likely to go down in history as very important ones. pic.twitter.com/P95kmoPHSV

The RIC format has been around for quite a while – it’s the 16th meeting of the foreign ministers. But with new challenges in sight, such as Washington’s attempts to impose its “rules-based order” on other nations, New Delhi, Moscow and Beijing are strengthening their alliances, with Russia-China-India “trinity” being one of the of the rapidly developing international clubs. At the sideline talks in Wuzhen Russia also expressed hope for de-escalation between India and Pakistan.

Russian foreign minister Sergey Lavrov says that cooperation within RIC is based on international law, when all members respect other nations’ sovereignty:

"The process of building a fair and democratic polycentric world requires coordination and consolidated decision making on our behalf. We have to promote a positive international agenda, which is based on unity, on building regional and global security, on stability, on sustainable growth, on improving the architecture of international relations worldwide, including the Asia-Pacific region".

The Wuzhen meeting resulted in the diplomats’ pledge to extend trilateral cooperation. The ministers agreed that the contacts of Security Council members, which have already become part of the RIC framework, are quite productive, and now member states will consider China’s proposal to establish similar trilateral contacts between defense ministers. RIC members are critical of Washington’s regime change tactics in Venezuela, and expanding the trinity’s dialogue to include pressing military and security issues seems quite logical in this situation.

Chinese symbols applied to Wuzhen talks: Yezi Ou-a master in founding swords, once crafted a sword for King of Qi in the local foundry workshop. RIC is not a military alliance, it’s not “making its sword” yet, but the bloc’s plans to discuss defense topics don’t look excessive. pic.twitter.com/aawrv62K2q

Other issues that RIC is planning to include in its agenda are contacts between youth organizations and between academicians. The bloc’s youth forum will be held in 2019 in Russia.

Views and opinions expressed in this article are those of Denis Bolotsky and do not necessarily reflect those of Sputnik.