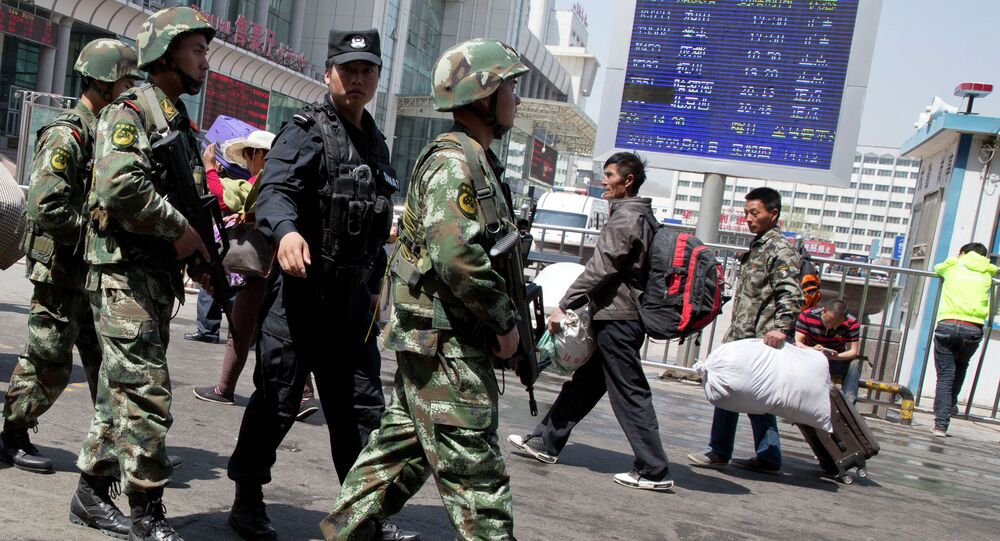 Sputnik spoke to Saikat Bhattacharya, research scholar at Jadavpur University in Kolkata, India about the report and its broader geopolitical implications and timing. Saikat is a regular guest on Sputnik Radio and has written for Regional Rapport and Global Village Space.

"Page 631 is the most important part of the report", he said. "On the other hand, the report also alleges that the Syrian government, Iran, Russia, and Hezbollah committed 'atrocities' against non-Kurds, according to SDF sources".

© AP Photo / Li Gang/Xinhua
Western Powers Will Never Give Up US Policy in South China Sea—Research Scholar
But the report also praised Russian president Vladimir Putin and Turkish president Recep Tayyip Erdogan for brokering the truce in Idlib which saved many lives, Mr. Bhattacharya said, and that atrocities in East Ukraine were also mentioned to add "balance".

"Here lies the trick", he said. "While atrocities in East Ukraine or SDF-controlled areas were mentioned without directly attacking authorities operating there, the governments of China, Iran, Saudi Arabia, Russia, Venezuela, and Cuba accounted for most 'human rights violations'."

"However, the governments of the USA, Ukraine, and SDF were accused of not taking enough action to reduce violations, the Chinese government, or any country often considered in the 'anti-USA' camp are held responsible for the bulk of human rights violations. This is cool-headed propaganda in favour of Western imperialism, which tries to downplay human rights' violations in pro-Western countries whilst amplifying the problems of neutral or anti-Western countries manifold."

Implications in the China-US Trade War

The 2019 HRW World Report also insists on highlighting China as there is an ongoing trade war between Beijing and Washington, Mr. Bhattacharya said. "At such a time, reports about the repression of Uighur and other Turkic ethnic minorities came into being."

"Timing shows that the report is being used as a bargaining chip to pressure the Chinese government into accepting US-dictated terms on trade and investment, with US secretary of state Mike Pompeo stating that Washington will force Beijing to 'address the gross human rights violations' in China. The HRW report complements that accusation".

© AP Photo / Ng Han Guan
Ab-CERD: UN Report Linked to US Color Revolutionaries Trying to Undermine CPEC
He added that as the Syrian crisis is winding down and observers have stated that many Uighurs have gone to Syria to fight alongside Islamists against the secular government of Syrian president Bashar al-Assad. "The HRW report attacks China's logical decision to refuse to legitimise those same terrorist factions inside its own borders", he said.

"You must remember that the 2018 HRW report demanded the safety of arrested IS militants, many whom were Uighurs. So you can easily guess how HRW can attempt to advocate these radical elements in China in the name of 'upholding human rights'," he said.

Western NGOs As a Form of US 'Soft Power'

Organisations such as Human Rights Watch act as an instrument of soft power for US imperialism, he said, adding that "in the name of 'neutrality' they mention the problems of all countries, but remain passive towards problems in Western countries to indicate deficiencies in human rights standards there.

"But whilst discussing problems in China, Russia, Iran, Cuba, Venezuela, Saudi Arabia and others, reports show how these governments are 'destroying' the human rights of these respective countries. Moreover, legitimate actions to protect state sovereignty and social cohesion are called 'human rights abuses' by these pro-Western organisations."

Thus, HRW and similar organisations try the concept of human rights into an instrument of abusing the sovereignty and social morality of anti-Western and non-Western countries.