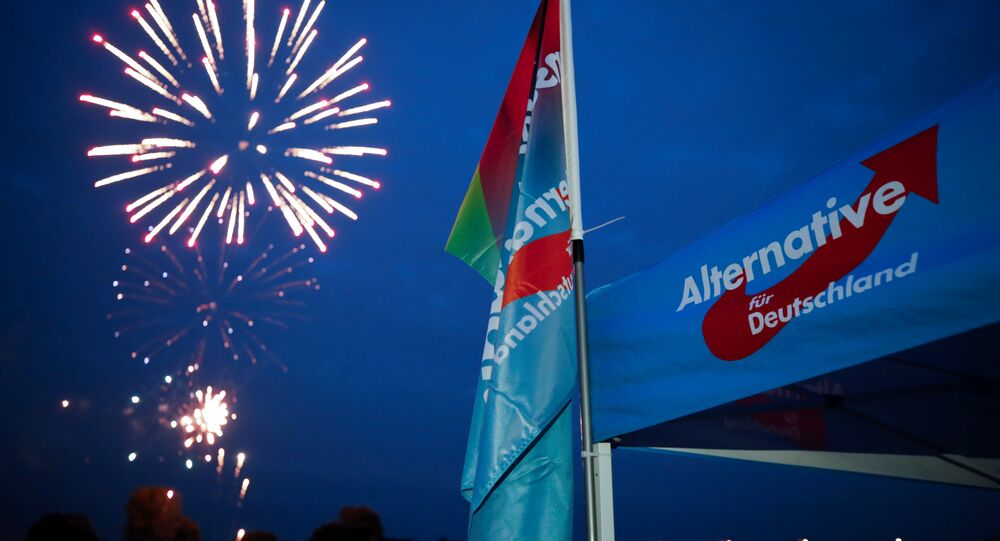 Sputnik: Why have you included a "Dexit" scenario into your programme?

Dr Malte Kaufmann: Well, we need to build up the pressure so that the reform of the European Union can be achieved. If we do not include the possibility of dissolving the European Union, then there would be no cause or no drive for the other nations to go for the reforms.

Sputnik: What reforms do you want for the Union?

Dr Malte Kaufmann: Well, first of all, we would like to stop the common European currency, the Euro. I think we should stop as a country, of Germany being liable for failing economics in failing countries.

© AP Photo / Markus Schreiber
AfD Tones Down Dexit Ideas in EU Elections Manifesto Amid Brexit Uncertainty
In the European Union, that is one of the reforms we would like to go for. Another reform that is very crucial and important for further development is that more sovereignty is handed back to the European nations.

And also, in our programme, we are calling for the ban or for the withdrawal of the sanctions against Russia. We would like to have better relations with other nations than we have right now.

Sputnik: AfD's Party co-chairman said that parties like Austria's Freedom Party (FP) and Italy's Lega (Lega Nord) would offer their support. How likely is that?

Dr Malte Kaufmann: That is very likely. In fact, you know that Mr. Meuthen, our party leader, is already a member of the European Parliament and at the moment he is involved in talks with other parties like the FP, like the Lega in Italy, and there is a big demand of the right-wing movement in Europe to build a bloc, a right-wing bloc with different parties from different nations to set something against the leftist movement in Europe, and I think we can achieve that after the elections.

Sputnik: If these parties support the motion, what response can we expect from Brussels?

Dr Malte Kaufmann: Of course, Brussels is hiding from this motion at the moment, with all means they have, because Brussels is a construct that is really very costly and expensive and thousands of jobs are involved in this apparatus. So, no wonder they are really siding against this.

Sputnik: If reforms are not implemented, how much support do you expect for setting Germany's withdrawal from the bloc in motion?

Dr Malte Kaufmann: We have growing support. Remember five years ago when we campaigned, we already sent 7 members of parliament into the European Parliament and I think we can expect to have at least 14-15, maybe more and now after the next elections.

© AFP 2021 / John Macdougall
Integrity Initiative Irrelevant Amid Already Ample Anti-Russia Propaganda - AfD Member
So, it is growing year by year because the problems are growing. You see that economy might be going down in the next two years. We still have the mass migration problem, thousand hundreds of thousands of people are still flooding in through trafficking over the Mediterranean Sea, for instance.

Islamic terrorism is crawling in Europe, crime is growing. So, it is sort of the same thing like in the United States with the southern border, where Trump wants to build a wall. As this is going on the support for our demands is rising not only in Germany but all over Europe.

Sputnik: I was wondering, how many AfD members support this idea?

Dr Malte Kaufmann: Well, we just… I am here live in Riesa in Saxony. Our convention is still going on and yesterday we voted on our programme after many discussions and changes here, and there and then the final vote on the programme was an absolute majority. So, the members of our party largely support our ideas.

AfD Party Member: There Are More Important Tasks in Politics Than Third Gender