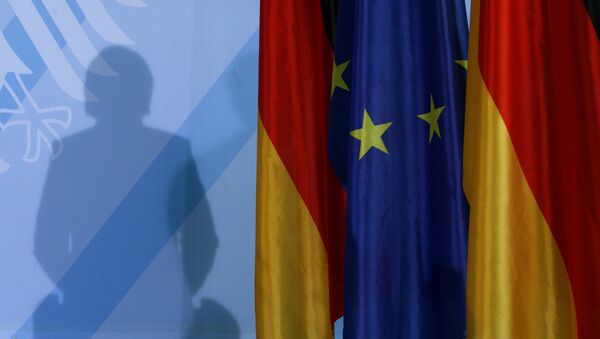 © AP Photo / Markus Schreiber
Subscribe
BRUSSELS (Sputnik) - The Alternative for Germany (AfD) party has softened the language on the proposal for Germany to leave the European Union included in its European elections manifesto, citing the need to wait and see how the United Kingdom's departure from the bloc will play out.

The party initially meant to call for Dexit to happen by 2024 unless substantial reforms took place in the European Union, but eventually decided to omit a reference to a specific timeframe.

The AfD holds 91 seats in the 709-seat Bundestag, which makes it the third-largest party in the German parliament. The far-right party secured seven seats in the European Parliament in the 2014 elections and is now looking to gain more influence at the European elections scheduled for May.

Germany's Domestic Security Office Intends to Look Into AfD Party - Reports
Many of the AfD members, who gathered for a conference in the town of Riesa over the weekend, blasted the European Union as impossible to reform.

However, the party's co-president, Alexander Gauland asked for a more moderate tone, including the omission of a specific date for a potential withdrawal. Gauland pointed out that the United Kingdom's looming exit from the European Union, expected in March this year, could influence voters in Germany.

"I think it is not wise to enter the election campaign with a maximum demand … It could influence voters in Germany if Britain's exit were to cause short-term turbulence and temporary economic difficulties for Great Britain. We always have to take into account that the consequences of Brexit may be unpredictable", Gauland said.

Beatrix von Storch, an AfD member of the Bundestag, believes that reasons for toning down the manifesto are twofold.

"First, we must see after the elections of May 26 this year, with the large number of [members of the European Parliament] MEPs that we are expected to gain, and the growth in representation of the other populist parties in Europe, present in the European Parliament, how we can launch a drastic reform of the union", the lawmaker told Sputnik.

The second reason would be calming down German voters, who fear Dexit as "a jump in the unknown", von Storch added.

"We must first see how Brexit develops and the future relations — chaotic or not — between the United Kingdom and the continent", the German lawmaker said.

Von Storch stressed the need for the AfD to attract new voters in Germany.

"To reach the centre of society, we should avoid the ‘hard soundtrack’. But of course, if our approach of fundamental reform of the European Union and the creation of a new European economic and interest community does not function, ‘Dexit’ is the last option, out of necessity", the lawmaker said.

Reform Bloc From Within

Joerg Meuthen, the party co-president, stressed shortly after the Congress in Riesa that the AfD wanted "a better European Union."

"Abolishing the EU Parliament without creating a new structure of substitution, is the maximum requirement if we don’t obtain anything in the next parliament", Meuthen said.

Von Storch insists that the AfD reforms aim to establish "a community of sovereign nation-states" where "there is no need for a European Parliament."

Meanwhile, Meuthen expressed hope that not only AfD but populist parties of other countries would gain more power in the new parliament.

"We will be much more powerful after the May elections. So will be the Hungarian delegation of Fidesz, the Italians from Lega and [Five Star Movement] M5S, the [Law and Justice] PIS in Poland, and of course there are already large delegations of Sweden Democrats, the [National Rally] RN in France, the Austrian [Freedom Party of Austria] FPO, probably a first delegation from VOX in Spain, etc … I am optimistic", Meuthen said.

German Politicians Outraged Over US Envoy's Threats to Nord Stream 2 Firms
The party co-leader added the AfD would then be able to "weigh efficiently on decisions" and "observe what happens with the application of Brexit in the United Kingdom."

The UK parliament is set to vote on Brexit deal later in the day. The road to reaching the agreement with the European Union had been rocky, and even now the United Kingdom is facing a no-deal risk, if the withdrawal package, criticized by many UK lawmakers, fails to pass the House of Commons.

The Brexit process has already taken its toll on the UK economy, and a no-deal exit, potentially disrupting supply chains for businesses, could be yet another serious stress. Since 2016 referendum, the UK pound has plunged heavily several times over various Brexit developments. A number of foreign companies have suggested they might rethink their operations in the United Kingdom in case of a no-deal Brexit.

A Survation poll showed in November 2018 that 54 percent of the UK voters would rather back the Remain option. In 2016, Leave campaign won with 51.9 percent.