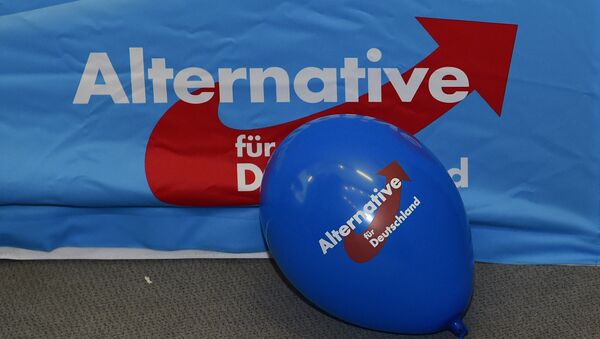 © AFP 2021 / John Macdougall
Subscribe
MOSCOW (Sputnik) - The UK state-funded project Integrity Initiative is just another instrument for information warfare and is unlikely to bring about a critical change to the current anti-Russia narrative that has swept all major Western media, Hansjoerg Mueller, a German parliament member from the Alternative for Germany (AfD) party, told Sputnik.

Speaking about a "cluster" that the Integrity Initiative runs in Germany, he said that "only insiders are aware of its existence, usual spectators are not."

German AfD Party Leader Calls West's Anti-Russian Sanctions 'Senseless'
When asked to comment on the hacktivist group’s revelations that the information campaigns were funded by UK taxpayer money, the politician said that this was "typical" for Western governments.

"It is typical for Western states that, first, they rob their own citizens by huge tax burdens and, then, abuse this money against their own citizens by financing illegal immigration and also left wing terrorists from the so-called Antifa, everything at the expense of the tax payer. ‘The cow is being milked and finally must pay for its butcher’ – that is how the evil game works," he argued.

Pierre Henrot, a defense expert in Brussels, in turn, described the UK state-funded anti-Russia campaigns as part of the West's consistent policy of portraying Russia as a "war-mongering giant" to justify the need to boost NATO defense expenses.

"The NATO budgets are on the increase with the 2% of GDP norm for financing defence of its member countries. Now, NATO has a great interest in painting Russia as the arch-enemy, ready to attack the Baltic states, Poland or Sweden… Using the pseudo-information produced by the ‘Integrity Initiative Project’ and other producers of tainted ‘studies’ helps in the process of painting Russia as a war-mongering giant, ready for a clash with NATO on European soil," Henrot told Sputnik.

Crimea’s 2014 reunification with Russia, meanwhile, is used as "proof" of the country's alleged aggression, according to Henrot.

"It happened peacefully, with an overwhelming majority of the Crimeans voting in a referendum to rejoin Russia. This does not please Ukraine, of course, but it does not mean at all that Russia is prepared to go to war with the West or is trying to destabilize Europe," he added.

On January 4, hacktivist group Anonymous published a new batch of documents claiming that Integrity Initiative, which aims to "track, expose and counter the increasing current of Russian malign influence," was going global. The project, which already has branches in several key EU countries, including Germany and France, is planning to expand to other European countries and former Soviet states, according to Anonymous.

Germany's AfD Party Wants to Put an End to Sanctions Against Russia - Deputy
The hacktivist group published the first batch of documents on the activities of the Institute for Statecraft's Integrity Initiative project in November. Anonymous said that the program, launched in 2015, was financed by the UK government, as well as NATO, Facebook and the US State Department. The group described the program as a "large-scale information secret service" created by London to "counteract Russian propaganda."

Anonymous also claimed then that the Integrity Initiative included covert structures to interfere in domestic affairs of several European countries, with its "clusters" running in multiple countries, including Germany, France, Italy, Greece, the Netherlands, Norway, Serbia, Spain and Montenegro.