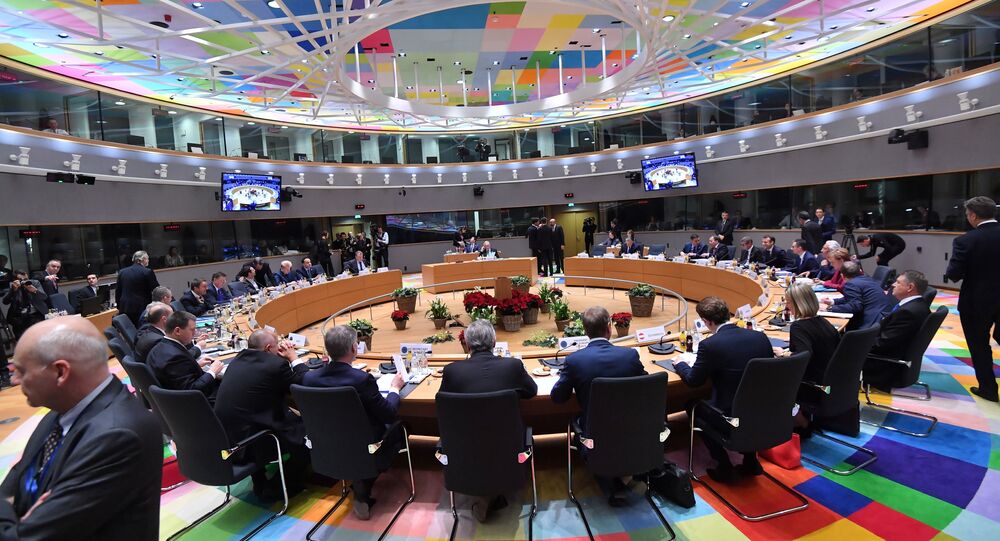 BRUSSELS (Sputnik) - EU leaders focused on a series of conflictual issues that show how divided Europe is, with the rise of populist parties and traditional parties trying to force through political decisions for which there is no consensus, such as "fake news," immigration and, of course, Brexit, as they met on Thursday.

The EU heads of state had two subjects on the table at their Thursday meeting — the EU long-term budget for 2021-2027 and mainly Brexit. On Friday, the summit will deal with immigration, "fighting disinformation," single market and external relations. The eurozone difficulties, notably with the Italian and now French budgets out of pace, will also be addressed.

Drieu Godefridi, philosopher and author in Brussels, told Sputnik that the European Union was coming to the end of its life as more and more European citizens appeared to see it as "harmful, biased and undemocratic."

"Above all, the cultural, political and geopolitical divergences between member states are deepening like abysses. It is the case between Central Europe and Western Europe, on nearly all subjects," he said.

© CC BY 2.0 / Free Images / Time Is Running Out For Brexit
UK Gov't Infighting: Pro-EU Minister Says Only Brexiteers & Insects Will Survive 'Apocalypse'
Godefridi added a rift had now opened between countries in favour of restricting migration, and the leaders who, like French President Emmanuel Macron, "still do not perceive the massive rejection of the migration issue by their population." Moreover, the divergences deepen between the countries that make energy as a realistic concept, and the "hard-liners of the 'all-in-kind' such as Emmanuel Macron in France and [Prime Minister] Charles Michel in Belgium," according to the author.

"These differences seem impossible to reconcile to me. This is why the ‘European summits’ appear and will appear more and more for what they are — a masquerade of puppets, reminding of what the EU was when it was more modestly summarized as a ‘common market’," Godefridi concluded.

As for the European Parliament, a majority of lawmakers said in a March 2018 resolution that climate-related spending should be increased to 30 percent of the budget by 2027 under the Paris Agreement.

Climate action should be mainstreamed across all EU programmes, with a target of 25 percent of all expenditure contributing to climate objectives, Miguel Arias Canete,‏ the EU commissioner in charge of climate action, said. This is up from 20 percent in the current budget for 2014-2020.

The discussion will continue on Friday, with countries relying heavily on coal for their energy, such as Poland, being reluctant to follow the Commission's recommendations without specific help to do so.

Janice Atkinson, a UK member of the European Parliament, said that the EU budget is "a fantasy document produced and ratified by the same people that raise our taxes, open our borders and misuse taxpayers’ money in pursuit of damaging policies, for example, environmental policies, that the majority no longer support."

Brexit, End of Road for Theresa May?

Upon arrival for the EU Council meeting this Thursday, UK Prime Minister Theresa May declared she had come "to get legal and political assurances to assuage the concerns of my fellow MPs in Westminster."

May has toured some European capitals this week, including The Hague and Berlin to convince European leaders to give her a bit more leeway so that she does not come home from this Brussels summit empty-handed.

The Single Market strategy for goods and services was part of the discussion, since – under the Brexit agreement – the United Kingdom would effectively remain within the EU Customs Union. This is precisely why the "Brexiteers" refuse to accept about her plan, judged too weak and leaving the bloc deciding the United Kingdom's economic future.

© Sputnik / Aleksei Vitvitsky
EU Council Says After Brexit Summit Divorce Deal Not Open for Renegotiation
May's vision of Brexit was put to test on Wednesday night when the UK ruling Conservative Party voted 200-117 to declare confidence in the prime minister.

Commenting on the vote, Atkinson, who also co-chairs the Europe of Nations and Freedom (ENL) group in the European Parliament, said the "real Conservatives" who represented the voters had lost the ballot.

"The Tory party was hijacked by social democrats under the leadership of David Cameron, the former prime minister. He moulded candidates in his own image and gerrymandered the election lists to select candidates that would be pro-EU… That’s why the real conservatives lost last night. May has contributed to ruin the once great Conservative party and her party will be punished at the ballot box. The MPs who voted to keep her last night have gone against the will of the voters and their own membership… May will limp on and we will not get the Brexit we voted for if she manages to get it through parliament, which I greatly doubt," she said.

Marco Zanni, a member of the European Parliament from the Italian Lega party, said it was important to respect the will of the UK citizens who clearly voted for Brexit in the 2016 referendum.

"We fully respect the outcome of the Brexit referendum; it is not in dispute. We are now waiting for the outcome of the vote in the British parliament. If no political agreement is reached, we can deal with a hard Brexit," Zanni said.

EU Future After May 2019 Polls

Zanni added that the situation in Italy was different from that in the United Kingdom because the government did not need an "Italexit."

"The European elections in 2019 will show the need for radical changes in the European institution with less bureaucracy, less austerity, less centralization and more national sovereignty. Italy is often called the world laboratory of populism and rightly so," the lawmaker said.

Zanni predicted that the May 2019 vote in the European Parliament would bring populist parties back from their exile.

"In Italy, the support of the Lega and Five Stars Movement (M5S) is close to 60 percent in the population, according to the latest polls. It means that the present ruling class in Brussels will have to disappear or change its language after May 2019. The sovereign and populist parties provide an alternative idea to the bankrupt project of [EU Commission President Jean-Claude] Juncker, [German Chancellor Angela] Merkel and Macron," the lawmaker predicted.

Eleonora Evi, a member of the European Parliament from Italy’s M5S, which forms the government coalition together with Lega, said Europe needed much more transparency, instead of placing the same people in competing positions and decision being taken behind closed doors.

© Photo : Pixabay
Almost 30% of Italian Population at Risk of Poverty in 2017 - Statistics

"Europe should be a ‘glass palace’, the lighthouse showing the way to follow to overcome any obstacle that separates people who are inside the institutions from people outside," Evi pointed out.

The lawmaker also argued that the European Union should be rebuilt on the basis of ethical principles, moral integrity and transparency.